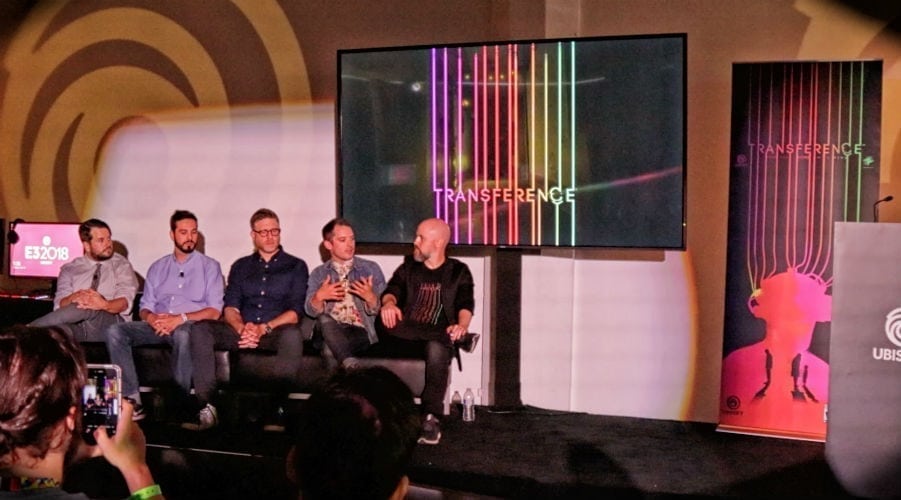 I had the good fortune to see quite a few interesting games at E3 this year. Most of them were incredibly well-conceived, graphically advanced, and seemed to elevate how we think of mainstream gaming. However, none of the major games I saw showcased throughout the event really made me think, “Wow, that could revolutionize how we look at gaming.” That is until I got to take a look at a little horror VR game called Transference.

The game, which was brought to my attention while reading up on Ubisoft’s offerings at the event, immediately caught my eye. The creepy atmosphere, fascinating concept, and simple design definitely left me wanting more after only viewing the trailer. Actor Elijah Wood, creative director for the game, also discussed the project with fellow members of the team at an exclusive event during E3. I could sense the overall passion behind the game, which has been in development for two years, just by listening to the team reminisce on their inspirations for the project.

While at the event, I was lucky enough to try out the exclusive demo for Transference. And, I must say, I was quite blown away. At first glance, the game looked interesting, to say the least. But once I put on the headset, grabbed the Oculus Rift controllers, and cut off the sounds of the outside world, I could tell this game is going to turn some heads. And unsettle a lot of people.

Transference is the type of game that you need to play the right way, with a full VR setup. There are audio and visual cues that require your full attention as they are essential pieces of each puzzle. For example, I found myself listening to radio frequencies and tuning the radio itself perfectly in two separate dimensions in order to match them up and get to the next room. Not only was this incredibly satisfying to complete, I was having fun … while being totally creeped out by the atmosphere.

Due out this fall, Transference looks to be not only a great VR experience but a great game. Unsettling, satisfying, and definitely imaginative, I can’t wait to play the whole game myself. Even if I refuse to play it at night.