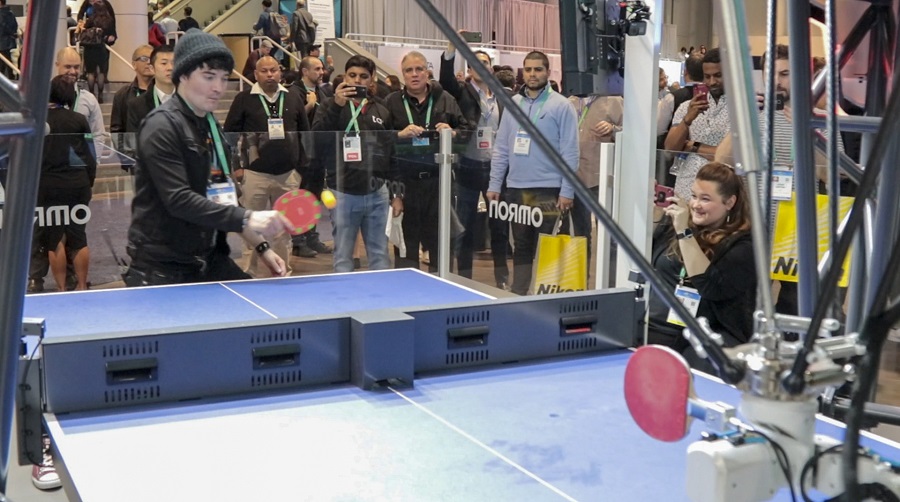 CES 2020 was everything I wanted and more. Throughout the show, I met some incredible people, had thought provoking conversations, and got numerous blisters on my feet. (Gotta remember to get new shoes before the next show.) To be honest, I wish I had a GoPro strapped on my head the entire time simply to chronicle everything I did throughout the week. Well, since I neglected to do that, here’s just a few highlights from yet another incredible CES.

As per usual, the opening events were a perfect way to get into the CES mood. In addition to the copious amounts of food and beverage provided at the shows, numerous startups made an appearance to show off their new technology. Throughout both events, I saw smart mirrors, virtual reality safety simulators, advanced prosthetics, and much, much more.

I’ve had the privilege of playing against Omron’s FORPHEUS ping pong robot three years in a row now. And, well, I’ve never exactly done too well against the robot. However, I still feel as though I’ve improved from year to year. …even though that’s not what my co-workers have told me. As an added bonus, I got to the opportunity to meet Josh Dobbs, STEM enthusiast and Jacksonville Jaguars quarterback, in person a few months after our interview. Let’s just say he fared slightly better against FORPHEUS than I did.

Outside of the usual CES activities, I had the pleasure of being invited to VSin’s Sports Betting Summit, which featured in-depth conversations about the future of wagering. The event kicked off with opening remarks from VSiN founder Brent Musberger, who delivered some insight into the current state of legalized sports gambling along with a few jokes about the Cleveland Browns’ ineptitude. Additional speakers included Yahoo! Sports GM Geoff Reiss, MLB EVP of Gaming & New Business Ventures Kenny Gersch, and Legal Sports Report Managing Editor Adam Candee.

Last year, Harman and JBL collaborated to put on an incredible show featuring the Foo Fighters, highlighted by Dave Grohl chugging a beer and falling off the stage. What did they do for an encore in 2020? Well, they happened to invite two rock ‘n roll icons, Pat Benatar and Stevie Nicks, to the Hard Rock for a night of nonstop hits. It’s just a shame I have to wait an entire year for the next rocking show.

As a final highlight, I was given an invitation to participate in an official CES podcast to discuss vehicular technology around CES. Every year, the event ups the ante when it comes to vehicle tech, from self-driving cars and beyond, so it was a joy to be able to open up about my personal views on the state of automobile technology. You can listen to the full episode here!