Will Gadd Gives His Top 9 Tips For Lifelong Athletes

Will Gadd is getting physical! A professional climber, paraglider, world-renowned ice climbing athlete, author, and speaker, Will Gadd has won every major ice climbing title from the World Cup to the Winter X Games. He was the first man to ascend a portion of a frozen Niagara Falls, and recently tracked down the rarest ice on earth during a once-in-a-lifetime climb – the last remaining glaciers on Mount Kilimanjaro. You can catch up with the 2014 recipient of National Geographic’s Adventurer of the Year and his most recent adventures at Willgadd.com 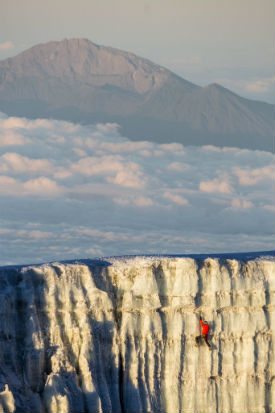 Will Gadd ice climbing near the summit at 19,000 feet on the glacier ice on Mount Kilimanjaro in Tanzania, Africa on October 31, 2014.

Commit to being an athlete.

This means moving at whatever level you can, regularly. I did something physical more than 340 days in the last 12 months. Sometimes it was an hour in a POS hotel gym, sometimes an all-day suffer-fest, and sometimes a walk up a hill with my kid on my back. But it was something.

People get all worked up about a precise number of sets, or “peaking,” or nutrition, but they need to simply shut up and go do something physical every day. Stop worrying about perfection and just move. The rest is ever-refining details and shaping that movement toward a goal if desired.

Write down what you do every day.

I know how may days I trained because I kept a log. I make my little entries (“skied for an hour”) every day with great joy. It’s a reminder that what I do physically matters, and I am so damn proud of my lazy ass when I wake up extra early to ski for an hour before I get on my flight to some city. Plus, watching the sun come up while the city sleeps is rad.

Pay attention to your body.

If it hurts, stop doing it. Do something else, or do what you’re doing differently.

That being said, just being uncomfortable is not hurting. Screaming with effort to finish a set or a climb is not hurting. That’s weakness evaporating from your body and mind, and it’s great. Hurting is different. Listen to your body or pay the price.

Every top athlete I know eats food to fuel his or her results and isn’t too discriminating about what goes down the hatch. Really. Many, many people I know eat Paleo, vegan, or WTF the latest hyped craze is, but those diets don’t really do sh*t athletically. Eat good food mostly, some junk regularly, exercise hard regularly. We’re done here. Seriously, it really is this simple.

I often hear, “I want to win comp X” or “I want to climb 5.XX.” OK, but what are the small steps to get there? A big success is just a lot of little successes put together. Define those little steps, and do not weaken. Celebrate them.

Surround yourself with people who like to do physical stuff.

We are all reflections of our friends, for better or worse. Choose friends who are positive, psyched, and want to move. (This is why CrossFit has done so well. You can argue about whether or not it’s relevant, but it for damn sure builds communities of people who are active). I end relationships with people who aren’t psyched on life and doing physical stuff. Shallow? Maybe. But if you think so, then you’re probably not really getting the point and need to sit on the couch some more. I won’t be there.

You own your time until you sell it.

Sell it for what you truly want. There are a lot of time parasites that seem important but just aren’t. If you sell your time to email and do bullsh*t that is total unmemorable and mostly useless, then you won’t have time to do something physical. Or play with your kids. Or knit. Or whatever it is that turns you on for real instead of just sucking your time. If you don’t make time to move, then you have decided that everything else in life is more important. It’s not.

Endlessly. Obsessively. Doing something physical just to do it is enough. But, if you want to get good at something, then you have to get better at it every single day. If you’re not getting better at it, then you don’t really want to be good at it and need to examine why. Seriously, it’s that simple. Think about what you’re doing, figure out the slop, get rid of it, repeat.

I’m often asked, “How do you keep going when it’s so hard?” Usually the journalist has seen some footage of my friends and me suffering to achieve something, and feels that it’s some incredible effort that most people couldn’t do. Bullsh*t. Don’t weaken in training, and you won’t when it’s uncomfortable and sh*tty in the defining moments of life. If you’re doing sets in the gym and quit when they get uncomfortable, then you’ll quit when it’s time to push harder for real. If you don’t get out of bed in the morning to go for a run when the alarm rings, then you won’t get out of the tent when the alarm rings on summit day.

Images Courtesy of Will Gadd