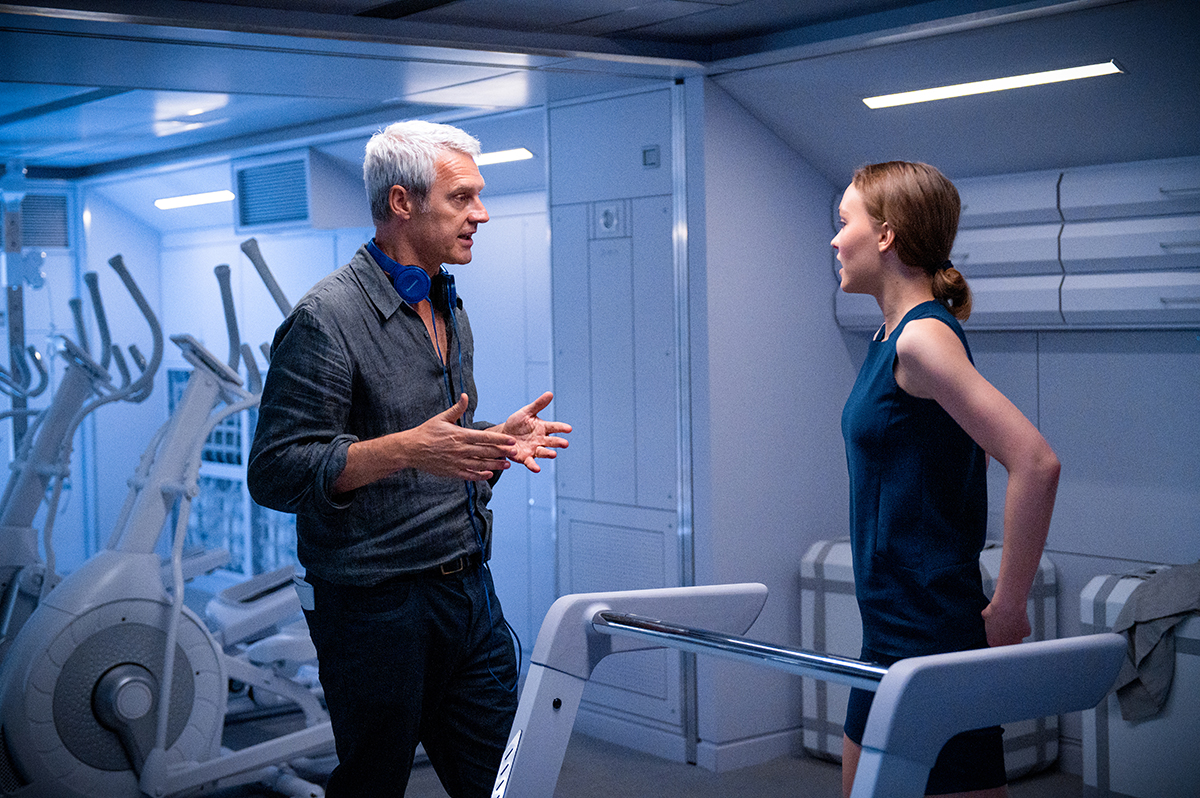 Director Neil Burger and Lily-Rose Depp on the set of VOYAGERS. | Lionsgate photo

It’s not often that I catch a new sci-fi film that carries genuine depth. More often than not, films are shot with crazy fast scenes, where you can barely tell what’s happening — like the Transformer films.

Neil Burger’s Voyagers is NOT like that — and in the most wonderful way. Voyagers, which opens in theaters tonight, takes you on a journey to populate a new world. Earth is dying and a new home must be found.

Burger, who directed the Divergent films, The Illusionist, Limitless, The Upside and more,  takes us on a multi-generational trip through space with humans designed as eggs specifically to handle the mission and populate the new world with the smartest minds.

It’s an intense film that tackles many issues and philosophical questions regarding the ethical considerations of such missions. The story’s depth is only paralleled by the performance of the film’s cast.

Lily-Rose Depp plays Sela, one of the young who will be born and die on the ship. She absolutely owned the role and showed glimpses of what is a very promising future for the budding actress. Sheridan slips from a momentary mental slide into a take charge leadership position trying to steer the newly-clear-minded teens back to the mission.

Whitehead plays Voyagers’ antagonist, Jack. When Jack stops taking “The Blue,” he took a rapid descent straight into a glorious pit of madness. Raw emotions drips from this character as he slides into position as the leader of the teens who don’t recover from the surge of emotion brought on by quitting The Blue.

The Blue is a drug designed to keep the teens focused on the mission at hand, while removing the distractions of normal life. It’s a blessing and a curse. You’ll have to watch this amazing film to see why.

We were lucky enough to catch up with Director Neil Berger a few weeks when we screened the film. Here is what he had to say about Voyagers.

Innovation & Tech Today: I appreciate taking a minute to chat. I sat down last night and watched Voyagers. I absolutely loved it. Tell me a little maybe about how that storyline came together, as I see you’re the writer as well.

Neil Burger: Yeah, I actually wrote it a long time ago. It’s funny, because some other people had asked me recently, and I, I remember just having a couple of images that actually popped into my head.

I mean, in this case, I just had two images. I had these images of young people sitting on the floor of a really confined space ship, sort of zoned out, disheveled, kind of almost like they’re after a hunt or something like that.

And then I had another image, which was the same group chasing another crew member down the hall and catching them and beating them to death. And it was sort of, they were startling to me.

I thought something was there that was sort of meaningful and, so really, out of those I teased this story out. Why they were there and what was going on and why would there be young people on a spaceship? I wanted to do it in a real way.

I&TT: Oh, wow. Well, you know, it was very interesting. And I feel like the film really tackled some interesting philosophical questions. In particular, it seemed like questions that we could one day deal with as a society as well. Environmental issues, things like that could push us to some day be looking for that next home. Is that something you see as possibly forward looking in terms of things that the future could hold for society?

NB: Yeah, well, you know, it’s possible. But I suppose what really interested me was if we were in that situation, how as human beings do we do we react to it? Who are we at our core? You know, who are we to be?

What’s interesting about the story, or what I’m most interested in, is not necessarily the reason, like, “Oh, we’re going to this planet for X, Y, Z.” There’s certainly been lots of movies that have that premise.

It was more like what happens when we’re on that on that journey? How how did these people behave? How do they get by? In a way, I see it as kind of a metaphor for their spaceship floating through space with not really any sense of why they’re here or where they’re going.

And you could say that we are too, sitting on our own, you and me, on our own spaceship here, floating through space. What are we doing in here?

You know, we need to live here and we need to figure out how to live together. We’re all on this planet together. So, I tried to kind of distill all those ideas down into this very kind of, you know, pressure cooker of a setting.

I&TT: You did that well. I enjoy a film that challenges me a little. And I felt like this did something that really intrigued me. When they stopped taking “The Blue,” it was almost like they were high. It was like there was this sudden onslaught of emotions. I guess it’s the speed and force with which it hits them?

NB: I think it’s like they’re kind of reverting to their most human state. I think the blue was instituted to kind of keep them docile, you know, and calm in this confined setting.

It was actually, you know, the mission planners, they actually did do a good job. They did anticipate young people acting out. And so they are on this and they haven’t told them why they’re on it, but they’ve added this supplement to their food, “The Blue.”

It keeps them, you know, tame and keeps them docile and and deadens them in a way, so that they they don’t act out and so that they do what they’re supposed to do on the on the mission.

It’s also so that they procreate at the right time. And then when they go off it, then they’re just sort of untethered. They’re unleashed in the air. So they have this, you know, awakening of, you know, what you and I might think of just normal sensation and senses. But they’ve never felt those kind of desires before, appetites or whatever. And it just kind of boggles their mind and they just go crazy.

I&TT: It was interesting to me to see their different reactions as they stop taking “The Blue.” That one of them goes through a spell, but then comes back to reality. Where the other just descends into madness.

NB: I think you’re right. And it’s like, what does that say about them? And that happens with the rest of the crew, too, so they all go off of it. Some of them still try to do their duty and still look out for the mission, even as they’re feeling that things and the others are like, “I don’t care, I’m just going to do what I want to do.”

And it’s, you know, we see that with people in our society. They’re all born and we’re all babies. And then, it’s about self-sacrifice versus selfishness — how we deal that and how and why not be selfish? You know, we’re all going to die in the end anyway, so why can’t I just do whatever I want? It’s not an unreasonable question.

NB: Some of them have reasons that they want to look out for other people. And others are like, what’s the difference? You know, so, yeah, that kind of dynamic.

I&TT: So, when was Voyagers filmed?

NB: It was shot in 2019. So, it was we were supposed to come out at Thanksgiving but — yeah. We shot pre-COVID[-19], but in a way you know it suddenly seems to kind of foreshadow all sorts of things. This confinement.

I mean in the beginning of the movie, you see all those technicians wearing the hazmat suits or the clean suits because they don’t want to spread disease. And it was like suddenly you see that and you’re like, oh, I know exactly what that means.

And, you know, when he goes into the habitat simulator in the beginning, he goes through this ultraviolet like cleaning, just briefly. It’s kind of in this airlock. And, you know, so we know all about that.

Then we know about confinement now, too, and being kind of locked down into a small space. So, I think we’re all longing to be set free, you know?

I&TT: Yeah. Those concepts have a different view to us today. On another note, I enjoyed the decision to use this intense imagery as things shifted. It kind of felt a little [David] Lynchian as the flashes were happening. Can you tell me about the decision to go that route?

NB: Well, I had always been thinking about doing something — seeing like these macro images and we use some of them, like hair rising on somebody’s skin, you know, as kind of like an indicator of things and like some awakening.

And then they were looking at videos and things, like that later imagery. So, we started to use that as like, the images they’re going to look like are going to kind of accentuate what they’re doing.

And then we just decided to go all the way and do things that also became expressive and evocative of their awakening. Whether it be this kind of time-lapse flower bursting open or whatever.

We just decided to have these sort of impressionistic kind of shots of imagery to show that that sense of it. And so, we went with it.