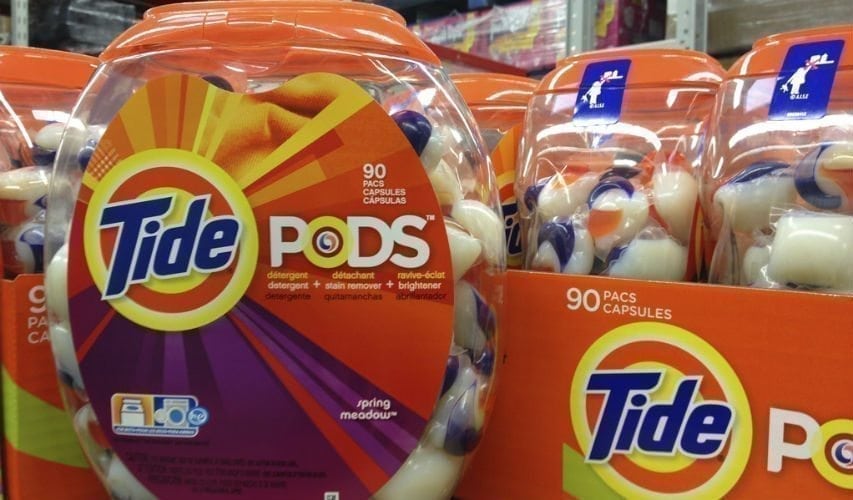 Welcome to 2018! Everyone is fighting about everything, a talking toilet was showcased at CES, and it was recently discovered that smoking marijuana with monkeys could result in a deadly strain of herpes. The time of things being shocking is long gone. Well, here’s yet another example that the late 2010s are an affront to humanity, as there’s a new viral sensation: consuming pods of laundry detergent.

The Tide Pod challenge, which I’m going to assume isn’t officially sanctioned by the Tide corporation, has become an internet sensation that is sure to make you feel much better about how your life is going. Teenagers, those awkward middle-stage evolutions between children and adults, have decided that having a supercomputer with infinite amounts of knowledge in their pockets simply isn’t entertaining enough, so they’ve turned to ingesting the colorful pods to pass the time.

Videos of the Tide Pod challenge have become viral sensations, garnering large amounts of views online. Someone on Instagram even tried to vape a tide pod, which resulted in him creating a millennial stereotype vortex which is currently threatening the entire West Coast.

Thankfully, YouTube has begun taking down the harmful videos, going against YouTube’s long-standing policy of making everyone mad. In an official statement, the video hosting giant claimed that the videos violate their Community Guidelines. Meanwhile, the challenge itself has gotten so out of hand that Tide actually had to post a video of New England Patriots tight end Rob Gronkowski explaining that you shouldn’t eat tide pods. To put this in perspective, an athlete who owns a personal party bus dubbed the “Sinner’s Bus” is teaching the youth of America about poison control. 2018 is shaping up to be quite the poorly written episode of Black Mirror.

Now, challenge videos are by no means something new to the world of YouTube. In past years, we’ve gotten the cringeworthy ghost pepper challenge, the silly cinnamon challenge, and even the charitable Ice Bucket Challenge. However, there’s one slight difference between today’s topic and the aforementioned challenges: none of them had poison control center numbers ringing at alarming rates. Don’t you miss the simpler “challenge” times of seeing a child crying after eating a dangerously hot pepper?