Super Mario Run is a pretty momentous app, not for its gameplay or ideas, but because the single most recognizable video game character in the world has made his mobile debut nearly a decade after smartphones changed the world. And, as a huge fan of the Mario series and looking at my phone alike, I’ve been pretty hyped up for the game. However, does the app live up to my refined Mario-loving expectations? Let’s take a look. 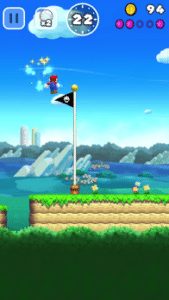 First off, for a more casual application, this still definitely feels like a Mario game. From the creatively designed levels to the sights and sounds, not much is lost in the transition to from consoles to mobile devices.

And, for the most part, the same can be said about the gameplay. The only control needed is to tap whenever you’d like to jump, as Mario is kept continuously running. While I didn’t think I would like this at first considering it’s so different from the usual Mario formula, I found that it was integrated very well into the game. Playing a Mario game with just one hand is not only fun, it’s a surprisingly engaging experience. Plus it technically means you can grab your friend’s phone and play two games of Super Mario Run at the same time. Not that I’ve tried that yet..

The main part of the game is the World Tour, where you go through the standard Mario levels and do the standard Mario thing he’s been doing since the 80s: save the princess from Bowser. It’s pretty much what you’d expect from a classic Mario game, but in bite-sized form. 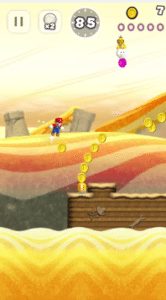 My personal favorite part of the game is the Toad Rally, in which you race other online players through a level. It’s a fantastic spin on the classic formula, as online platforming competition is something completely new to the Mario series. And yes, I’m currently undefeated in the mode. But don’t jinx it.

However, there are a few features I didn’t totally enjoy that were added to the game. The thing that most stood out was the fact that you automatically vault over certain enemies and obstacles rather than have to manually jump over them. This takes out one of the most fun parts of the game: stomping on enemies. I’m not a violent person, but is it too much to ask that I can jump on a few animated turtles?

But while we’ve talked about the good stuff and the bad stuff, let’s talk about the “meh” stuff. The Kingdom Builder feature is kind of an afterthought compared to the other game modes. While it may offer a bit of a change-up from the usual platforming, the Kingdom Builder is just your typical building/design mobile game. However, the fact that it’s Mario-ized does add a certain level of charm.

Overall, Super Mario Run is a very fun experience. It has the feel of a console Mario game, the controls work perfectly for mobile devices, and the Toad Rally mode is very addictive. While the first few levels are essentially a demo before charging $10 for the remainder of the game, I’d say the experience is worth it. And yes, you do have to pay money for this game. No free rides in the Mushroom Kingdom.

BMW Sees its Future in the Metaverse