The average amount of snow in Chicago is about 36 inches. It can come as early as Halloween and stick around past Mother’s Day. Let’s not get started on “lake effect snow” which means if you live by the lake it can make it snow more.

Mayors have lost their jobs over improper snow removal and “dibs” is a part of our snow removal culture that can lead to fighting in the streets.  Simply put, if one person shovels out their parking spot they have “dibs,” anyone trying to take that spot is breaking the “sacred dibs protocol.”

Snow removal is a “thing” to us Chicagoans. When Ryobi asked us to test and review its 21-inch 40-volt brushless, cordless electric snowblower in Chicago, we said bring it on.

Electric snowblower in Chicago.  Sounds like the beginning of a good joke, or something you smugly say to your hipster neighbor as they struggle to remove “heart attack snow” (another Chicago thing).

Ryobi is known as an innovator in the electric tool space. From simple drills to riding lawn mowers, the company offers something for everyone.

Ryobi claims that the snowblower will deliver “gas like power,” with a brushless motor. A brushless motors has significantly higher efficiency and performance, and less chances of mechanical wear.

Such motors also have a higher torque to weight ratio. Increased torque per watt of power input (increased efficiency). In “English,” a brushless motor is powerful and easier to maintain.

The snowblower is powered by two 40-Volt lithium batteries and they claim it is capable of clearing snow up to 13 inches deep. Without the hassle of gas or oil and with the 180° easy access directional chute control, it can throw snow up to 40 ft. away. 40 feet, In Chicago? Right.

The Set Up Test

Everything you need comes in one big box, with clear instructions, the tools you need, and parts clearly labeled. Even for my 12-year-old assistant and I, it only took about 20 minutes to unbox and build. It was an extremely easy process.

The first thing we noticed was how light and easy the snowblower was to maneuver. It’s not a metal beast like its gas-powered counterparts.  There are easy to adjust height and tilt settings for people of all sizes, a twist of two knobs and the control bars extended to meet my 6’4” frame or my 12-year-old assistant’s frame.

There is an led lightbar on the front of the Ryobi snowblower, so we decided to take our first test drive at night in the middle of a good six-inch snowstorm.

The two 40-volt lithium batteries were charged (doesn’t take long) and snapped into place. Instead of having to yank on a cord or plug it in, we simply pushed a button on the handlebar, grabbed the throttle (also on the handlebar) and the Ryobi hummed to life. It is very quiet.

Round #1- Ryobi Vs. Heart Attack Snow

They call it “heart attack snow” because it’s not light and fluffy like in a Hallmark Christmas movie. It is heavy and wet and yes, has been known to cause heart attacks when trying to shovel it.

One of the conditions of such dense snow is something called “beer canning.” Beer canning happens to snowblowers when the snow is wet and thick and clogs up as it comes out of the chute. Instead of flying out, it forms a wet goopy tube of snow that clogs things up and slows the process down.

Round #1 went to Ryobi

It gathered up the snow and tossed it aside like one of its bigger much more expensive gas-powered cousins. The LED light bar lead the way as we made our way up and down the driveway, spitting the sludge far enough away to keep it from gathering too close to the driveway. There was enough battery power to do our neighbors driveway and the sidewalk as well.

Ryobi Vs. The awful stuff the snowplow guys throw on the end of the driveway

I’m not sure if there is an actual name for it, but it is the worst part of any snow removal. Once you have everything done, it’s Murphy’s Law that a plow will come and toss a wet, thick, icy mountain of frozen hell at the bottom of your driveway.

Since our first test was at night, when we woke up the next morning, not only did it snow more, but the plow guys had been by a few times, leaving a Berlin Wall of impenetrable ice and goop about a foot and a half tall covering the bottom of our driveway. It was time to officially beat the heck out of this thing.

The Ryobi snowblower cut through the ice and snow, easily tossing it away. The adjustable chute made it easy to pick any angle to ensure the goop flew far enough away. The 13-inch intake height got a little tight at times, which is expected with any snowblower in this 21-inch class.

The job was done quickly and efficiently. One thing we noticed is when you push too hard on the handles, the adjustment clamps would give way and it would slide down, but a quick readjustment and tightening were an easy fix.

About every ten years Chicago gets dumped with an insane amount of snow. For those who live elsewhere, envision a relentless deluge of snow that shuts down schools and roads, leaves meteorologists giddy, and Chicagoans ready for battle. That snow arrived on January 31, 2021.

As I went out into the great white expanse, I could see all my neighbors with their gas-powered giants ready for war. This was fluffy but deep. Again, at this depth, it did take a few passes to cut into the snow, but the claim to be able to toss snow up to 40 feet was close, I had to quickly adjust the chute, because it was clearing part of my yard and landing in my neighbor’s driveway. It was living up to the “gas-like power” tag line.

The battle of the 10-year snow didn’t come down to performance, the Ryobi fought valiantly. In the end, it came down to battery conservation, which is the Achilles heel of anything in the electric space these days from a Tesla to the Ryobi snowblower.

A gas powered snowblower, just needs gas when it runs out. The Ryobi needs charge time, which can take a few hours — that is something to take into consideration. We have an average sized driveway for a two-car garage house and the batteries never drained while we did our driveway, our neighbors’ driveway and the sidewalk, but they did get incredibly low.

Ryobi does sell a rapid charger that charges about 4 times faster than the one included with the snowblower. It came down to a little bit of planning, I would finish up, put both batteries on both chargers, go inside warm up and by the time I had to go back out for another pass, they were ready to go.

If you live in the Upper Peninsula of Michigan which averages 207 inches of snow, this may not be for you. For literally anyone else, the Ryobi 40-Volt 21 inch snowblower is a great alternative to gas. It’s an advanced piece of technology that’s more than just marketing hype, it survived three rounds of Chicago winter. 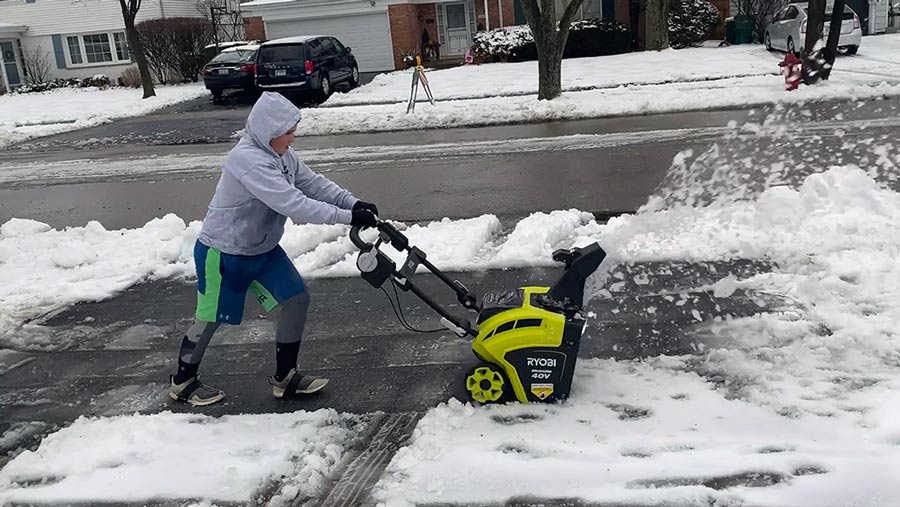