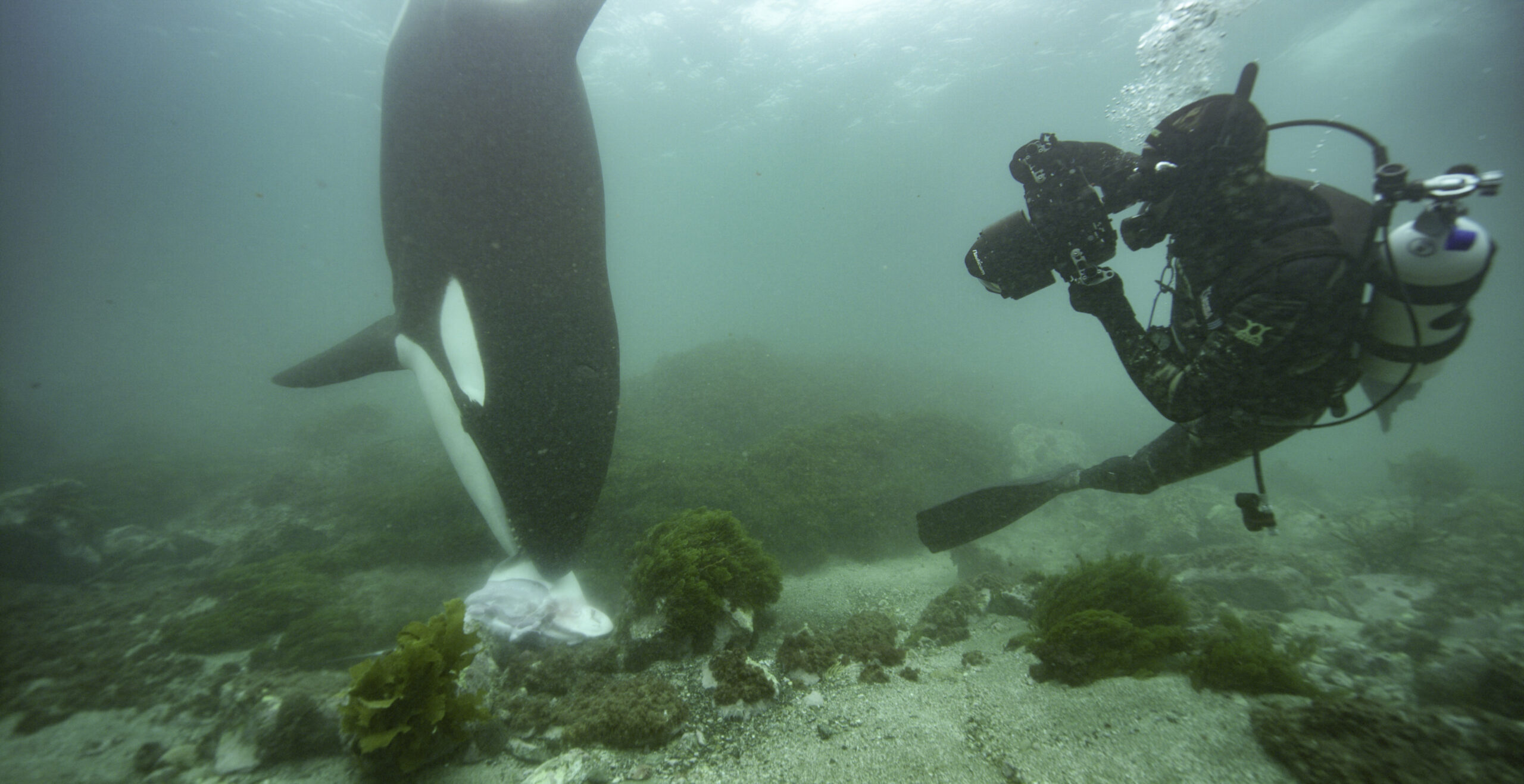 Brian Skerry couldn’t believe his eyes. And his are eyes that have spent 40 years shooting sea photography, and nearly a quarter-century filming and shooting for National Geographic.

What developed in front of the Secrets of the Whales executive producer and photographer defied typical cross-species senses: an orca was offering him her dinner — a freshly plucked stingray — while staring at her human visitor 40 feet below the New Zealand coastline.  He’d experienced a number of interactions with whales, but never one like this.

“I was hoping to see this population of orca who have figured out how to eat stingrays,” Skerry recalled. “They love international cuisine, and the ones in New Zealand like stingrays. I jumped in the water, was swimming toward this family of orca that were hunting in a shallow harbor, and this female was coming toward me with a ray that she had started to eat.  And as I got closer, she dropped it in front of me, and I swam down to the bottom. I knelt on the bottom, sort of next to that dead stingray, wondering if she would come back.

“So it’s just extraordinary to think that that animal may have been — I don’t know — offering me dinner, and when I chose not to partake, she went on her way.”

The New Zealand dinner invitation was one of many incredible experiences Skerry and his team experienced while filming the four 45-minute segments of Secrets of the Whales, which premieres Thursday, April 22 on NatGeo and Disney+ (check local listings). Along with that (minor spoiler alert), he watched the astonishing practice of whales literally beaching themselves to grab seals — and then using the tide to get back to sea. He also captured a sperm whale nursing her young, believed to be the first time we’ve viewed this, one whale species adopting a lost member of another, recorded diverse language patterns that differed not only by species, but by pod in some cases, and tracked families and communities engaging in truly complex and sophisticated lifestyles.

All of these moments, and many others, are covered in the four-show documentary series, which Skerry and his crew filmed over a three-year period. Besides the documentary series, Secrets of the Whales is also available in book form, and is featured in the May 2021 issue of National Geographic magazine.

The crew filmed the Norwegian Arctic, Antarctica, Hawaii, Alaska, the Hudson Bay region of Canada, the Cook Islands of the South Pacific, the Caribbean islands of Dominica, New Zealand, and other locations. They worked in water temperatures ranging from balmy tropical seas to 28-degree arctic and Antarctic conditions — during which Skerry borrowed and wore one of only a few 10-millimeter wetsuits available on the planet (by comparison, deep divers and surfers wear wetsuits in cold water with 5-millimeter maximum thickness.)

Going to such an extent makes sense when viewing the shows. These are truly different than other whale documentaries ever produced. The biggest difference, between a constant stream of never- or rarely-before-seen moments? The focus on whale culture and family in an increasingly fragile, hostile and food-deprived, climate-changing ocean, a storyline never explored like this before.

“With Secrets of the Whales, it’s really about focusing on the culture of whales, looking at their ancestral traditions, things that haven’t typically been viewed,” Skerry said.  “We’ve seen a lot of whale photos and documentaries over the years, but the difference with Secrets of the Whales is we’re looking at the ocean through the lens of culture.  These animals do have languages, they do have dialects, and they are probably saying things that would be alarming.  But the truth is we haven’t deciphered all of that at this stage.  We’re just at the very beginning of trying to figure those things out.  But what we can see and what science is showing us is that these animals have rich lives much like our own.  They babysit, they have food preferences depending where in the world they are, they have singing competitions, they have parenting techniques and strategies, and they also mourn for their dead.”

In a private interview with Innovation & Tech Today and Sustainability Today, Skerry later elaborated on the takeaways into his own life, in Maine. “I think that, from watching the whales and their cultures, and feeling like we were eyewitnesses brought into their worlds, I learned more about what it is to be fully human,” he said. “I mean, the greatest aspects of being human. Everything we watched them do was consistent with community in which everyone cares for each other, they look out for each other, and they even on occasion go beyond their species — like offering me dinner in New Zealand, or the sperm whales that adopted the wayward Narwhal in Alaska.”

For his part, in order to immerse into the whales’ world, Skerry had to immerse in training. Using both a lens camera and video camera, Skerry shot entirely by free diving. Hard as that sounds, it’s necessary; the bubbles of diving tanks scare off whales. He spent six months with trainers working on his breath-holding capacity, as well as diving in different water temperatures and conditions. By the time of the shoots, he could dive down 50 feet or more and remain underwater, working, for up to three minutes at a time.

Then there was coordinating the shoots themselves. When he presented the scenario of what was required for an underwater or surface shot to make the cut, it sounded like a row of dominoes lined up in a wind tunnel. All of the parts had to be perfectly in synch… and any disturbance or interruption at all could end hours, days or even weeks of careful planning. Because of that, Secrets of the Whales required a lot of raw footage. “According to the engineer, we shot 185 terabytes for this series,” Skerry said. “That’s more than the amount of data we get from the Hubble Space Telescope in a year.”

He elaborated further on the alignment of the stars to “get the shot.” “The greatest day of my life was when this project got greenlit, but then the next morning you wake up and realize you have to deliver the goods,,” he said.  “The sun has to be out, the animals have to let you close, they have to be doing something interesting, the visibility has to be good, no outside disturbances, cameras and lenses ready, I have to have enough breath to dive down and get a shot… all of those things add up to this tiny, little bull’s-eye.  But there was almost divine intervention in every location.

“I think it’s important to recognize that, as an underwater photographer, we don’t have the luxury that our terrestrial counterparts do, in the sense that I can’t sit in a camouflaged blind in some remote location and use the 600-millimeter lens on a tripod and wait for some elusive animal to come wandering past.  We can only stay underwater as long as the air supply will last. And with whales, that was all freediving, just snorkeling, breath-hold diving, so I’m only underwater for a couple of minutes, maybe, at best.  So I have to get very close to my subjects.  Even in the clearest of water, you need to get within a few meters of your subject.”

As Secrets of the Whales showed over and over again, another secret emerged, one that works to the great benefit of all viewers — the photographer is a bit of a “whale whisperer.” Skerry’s presence and calmness, his childlike curiosity and deep caring and concern for the whales, was fully reflected in the way one species after another moved in close to him, as if knowing he would tell their story their way. That fits right into Skerry’s approach to take audiences inside their worlds, rather than feeling on the outside looking in.

“If you spend enough time with any given population of underwater animals or terrestrial animals, you’ll see that they have individual personalities.  And I think that’s really the mystery,” Skerry said.  “So what we’re trying to do I think with many of these shows perhaps is to bring audiences in, show them what we see, and realize that there’s a lot more going on there than we ever realized.”

Secrets of the Whales is must-see nature, environmental and educational TV. It’s not only beautiful, informing and deeply satisfying, but also fully capable of transforming our understanding of whales as, through the lenses of Skerry and his team, they now share their very culture.