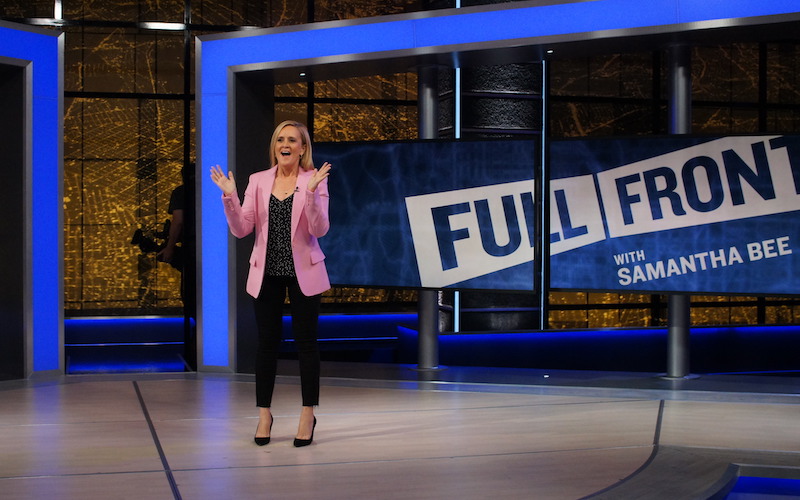 “What we did was the democratic equivalent of installing an above-ground pool. Even if we’re lucky and it doesn’t seep into our foundations, the neighbors will never look at us the same way again.”

This was said by Samantha Bee on her first episode of Full Frontal following the 2016 United States presidential election. The quote itself shows not only Bee’s unique comedic style, but her ability to weave political commentary with humor, even over some of the more contentious topics. This style could be seen throughout Bee’s long run as a correspondent on The Daily Show, where she spent twelve years before stepping into the spotlight herself.

Full Frontal with Samantha Bee, which debuted on TBS on February 8, 2016 (exactly nine months before Election Day), has kept this theme throughout its run, with segments such as “Roe V. Wade V. Everyone,” “Full Frontal Investigates: Is This Racist Racist?,” and “Flippin’ Off the NRA” tackling topics such as abortion, racial inequality, and gun control. In addition to her often scathing segments, Bee has found numerous creative ways to inspire political passion, as seen with her app “This Is Not A Game: The Game,” an experience meant to boost voter turnout for the 2018 Midterm election.

With Full Frontal going strong and another presidential election looming in the future, Bee has an exciting (if stressful) year ahead of her. The electric host opened up about this upcoming year, as well as everything from climate change denial to her unique take on the late night formula, in our conversation.

Innovation & Tech Today: Full Frontal launched in early 2016, many months into the presidential campaign of Donald Trump. How would you describe this political roller coaster?

Samantha Bee: It’s like a freight train that’s running off the track. It certainly was a really good time to launch a political satire show, particularly at the beginning of 2016 when in no world did anyone think that he was even going to get the nomination, let alone win the presidency. We had the opportunity to be more lighthearted and whimsical, if you will. And it’s still a great climate for doing political satire. There’s just so much to talk about.

We wish that we could not address such perilous subject matter all the time. It just feels like the stakes are very high, so we do our best with it and try to try it out. It’s definitely a comedy show for sure. The jokes are great, it’s just that the context is pretty terrible a lot of the time.

I&T Today: Can it be difficult to find comedy in some of those darker topics?

Samantha Bee: For sure. It’s really difficult to find a path through that difficult subject matter. The writers do a great job. Melinda Taub, the head writer of the show, is really constantly wrestling with big ideas. We all are. We made this choice to do the show this way, and I think it’s the correct choice. But it involves a lot of really careful research and really getting into a bunch of heartwrenching stories and material. Trying to find a comedy path through stuff that would be untouchable.

It should probably feel untouchable. But I honestly feel, particularly at this time in history, it’s very important to plant a flag in what’s right and what’s just. So having the gift of this platform, I think we have to use it. For as long as we have it, we should absolutely use it so we can look back on this time and think, “Okay, I’m on the right side of history, and I’m proud of the work that we did during a time of great distress.” 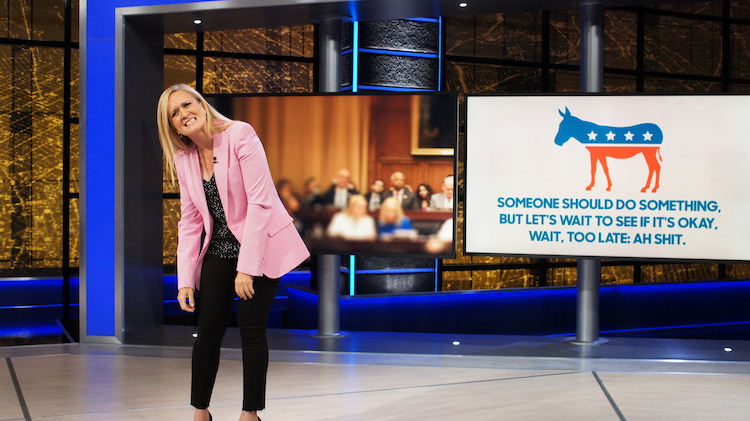 I&T Today: I remember the 2017 Full Frontal episode that focused fully on climate change in particular, complete with an environmentally themed song by Ingrid Michaelson. Do you see yourself tackling that topic in another full episode again?

Samantha Bee: I think we probably will. Obviously, issues of climate change come up constantly around our office, something we discuss all the time. It’s an interesting subject matter to wrestle with because the issues are so huge and it’s so hard to find a comedy way in, for sure.

It’s weird to say this, but as much as we tackle tough material, we always like to find a landing point that feels at least helpful or “Here’s the thing you can do” or “Here’s the statement that you can make” or “Here’s how you get on the right side of it.” We always like to have an action item if humanly possible. And so, climate change is something we wrestle with a lot of if you think about it. I’m sure we will one hundred percent cover it.

I&T Today: Why do you believe climate change denial is such a prevalent phenomenon?

Samantha Bee: Well it’s in this administration in particular, but a lot of people in public service right now are climate deniers in general. There’s a real fear and loathing of expertise these days. There hasn’t always been, but those people never had a megaphone as big, or the power to change laws that they do right now. So really big sweeping changes are being made, departments are being gutted. There’s going to be so much work to do when this administration is pushed into the sea.

All of these people with really cockamamie theories about things just have a super loud megaphone right now and it’s going to take a lot. We’re going to have to grab that megaphone away. Posthaste.

I&T Today: Last year, Full Frontal sent one of your correspondents to the Youth Climate March and it was packed with all these really intelligent young people that are passionate about the climate. Does that give you hope for the future?

Samantha Bee: Yeah. You do actually see that people, especially the young people, are still engaged with the issues right now. Obviously, the temperature in politics could not be hotter, people are so angry on both sides of the aisle. But I do think it’s just been a really potent wake up call, almost like smelling salts.

And that does give me hope, because young people are super involved, incredibly motivated, doing things that I never would’ve thought to do when I was young. Really, they are inspiring great change and taking up the mantle of change, fully understanding how older people have f***ed up the world completely. They’re actually just really agitated, really committed, really vocal. They understand social media, understand the tools of change.

The messaging is great and you can really get it out there now. It’s really great. It does make me feel good about the future. I know that when I step back from public life, people will take up that mantle. I’m really proud of it. For my own part, I did get a hive of bees at my house and I’m trying to put pollinators back in the world. I feel like it’s very on brand, and I just love bees. 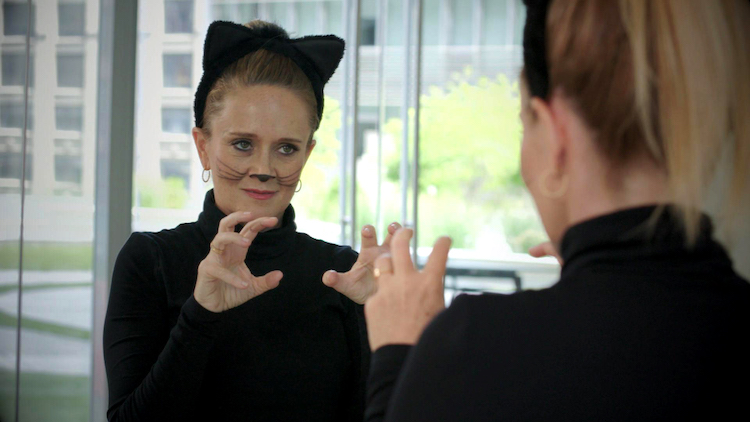 I&T Today: The late night format has changed so much over time. How do you believe Full Frontal stands out in this crowded late night field?

Samantha Bee: Well there was no change for a long time. Like, it stayed the same for a really, really long time. Now it has kind of opened up. I think we do things differently. For one thing, we don’t have to interview people. There’s a huge component of those other types of shows that we’re not required to do or are interested in doing, and that gives us a lot of space to do stories the way that we want to do them. We’re also different from Last Week Tonight with John Oliver because we are in a commercial format, so we have breaks built into the show, so we have shorter segments with which to wrestle material.

The perspective of my show is unique for sure. I don’t think there are enough women in this space by a million miles; I’m really disappointed there aren’t any other shows helmed by women right now. But I do think the perspective of the show is unique. The way that we attack difficult material is unique. The point of view that we take is very direct and I’m really proud of that. I think we produce a show that really is quite unflinching in our view of the world and the risks that we take and that’s the joy of doing the show, honestly.

I really wouldn’t want to do it any other way, and we always have opportunities within that to make just stupid comedy. We did a trailer for the Cats movie last night. There’s no purpose to it. It was just fun for us and we loved it. I think it turned out really well. So we have opportunities to just do ridiculous things too. But I’m proud of the way that we wrestle with material and make comedy on it. Really proud.

I&T Today: We’re roughly a year away from the 2020 election. What do you see happening in that time?

Samantha Bee: I don’t think that we’re at a great place. I don’t foresee it taking on a better tone. I don’t really have a great answer for this question. It’s really ugly out there in the trenches. People are duking it out online at a level that is so heightened and is so hot and angry. I don’t see it improving over the next year at all. I don’t know what’s going to happen. It feels terrifying to me. That’s not really a funny answer, but it’s scary. I don’t know, there’s anger in the air.

I really don’t know. I don’t have a clear picture in my head. I think I’m just like, honestly, I think I’m fumbling toward 2020 just like anybody else. Just deeply paying attention to anything. It’s not like any of us are geniuses at following it, you know? We just feel very caught there right now. We feel incendiary. Everything feels like someone tossed a Molotov cocktail into your room through the window of your social media. I guess it doesn’t take much to set people off. People are very divided within the Democratic Party, between the two parties, within the Republicans. Talking about it makes me want to go tuck myself under a tree and take a nap and totally Rip Van Winkle to December 2020.

The thing about it that I always say to people, though, is it’s not unique to us because we work on a topical political satire show. This is a shared experience for people in the country who are politically active. This was like if you are a news person or you’re just even remotely aware of what’s happening in the news cycle, you’re probably feeling it too. They don’t really know what to do, you don’t really know what the answers are.

I&T Today: I’d read that if you weren’t hosting Full Frontal, you’d be working on a foundation that benefits refugees. Is that still something you envision for the future?

Samantha Bee: Yeah, I think about a plan for myself, I think about what will happen when I’m no longer hosting a television show because there’ll be a lot of living for me left to do. And the experience of refugees is just an issue that really is of great interest to me. I think there are ways that I very specifically could be helpful and I would like to, I think that I will pursue that once this work is done and I have more time on the schedule. In the meantime, I try to use this show as a tool for getting stuff done. So that is very valuable.