The Celestron Astromaster 114 EQ is a Newtonian reflector telescope with an aperture of 114 millimeters and a focal length of 1,000 millimeters, giving the telescope a focal ratio of f/9. While the telescope is designed for astronomical use, it can also be used for terrestrial purposes. The lowest useful magnification of this telescope is 16, the highest being 269. Additionally, the telescope has a limiting magnitude of 12.8.

What Are the Advantages of This Telescope? 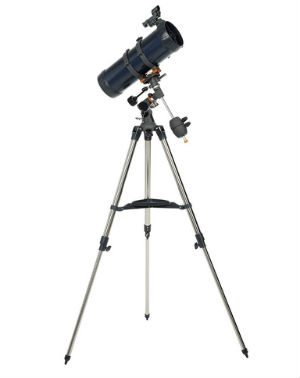 The 114-millimeter aperture of this telescope greatly improves the resolution of the image when you are looking at planets and the moon. In addition, the high magnification will allow you to see many double stars.

A high-quality coating is used on the optics, improving the quality of the image and the telescope’s durability. Additionally, reflector telescopes are never affected by chromatic aberration, which can distort the color of images. Reflectors can have a longer focal length than refractors with a tube that’s the same length. Therefore, this product has a fairly short tube, making it easy to transport.

It’s also more affordable than many other telescopes. While the price of the product depends on the vendor that you choose, some vendors offer it for around 160 dollars. In some cases, it’s possible to get a used version of this telescope for less than 100 dollars.

If you get it new, it comes with a red dot finder, as well as an equatorial mount. If you want to install object tracking, this telescope’s mount makes it easy. The tripod also comes with an accessory tray. This makes it easy to keep track of eyepieces and eyepiece filters.

Some versions of the product come with digital object tracking. Not only does this make it easier to keep objects in the field of view, but many digital object-tracking programs allow you to find objects in the sky with the click of a button. Many of these programs have a database with thousands of deep sky objects. If you purchase the product new, it comes with a two-year warranty from the manufacturer.

What Are Some Disadvantages of the Product?

If you don’t clean the telescope regularly, the image could become blurry. Due to oxidation, the mirror coating might need to be replaced if you use the telescope for a period of several years. Even if you do not need to replace the coating, you may need to polish the mirrors at some point.

Despite being quite affordable, the Astromaster 114 EQ is far from the cheapest telescope on the market. In fact, it is possible to get a 60-millimeter telescope for as little as 50 dollars or even less. While it can be used as a birding telescope, the lowest magnification often isn’t low enough to be able to find a bird before it flies away.