Video game releases are fickle. Sometimes an unknown gem is released to critical acclaim, and other times a heavily anticipated Triple-A title falls victim to its own hype, failing miserably to meet expectations (perhaps what you might call the “Half-Life 3 Problem”). The latter was certainly the case with the release of No Man’s Sky on August 9th this year. Before release, No Man’s Sky was touted as literally infinite, a procedurally-generated universe that developer Hello Games’ Sean Murray repeatedly said was so big that it was unlikely that players would ever come across the same planet (the game isn’t technically multiplayer, but players are all placed in the same persistent galaxy, something which in itself sparked a huge controversy).  Before release, the indie game looked like it would have almost no limitations on where you could go or what you could do — impressions borne of Sony’s giant marketing machine, which some have blamed for hyping up the game too much, creating expectations that Hello Games’ 16 man crew couldn’t ever hope to meet.

In the weeks after its release, No Man’s Sky saw a peak player count of around 212,000 fall to just over 9,000, and despite the developer’s efforts to regain consumer trust and turn the game into what everyone actually wanted, those numbers have stayed low, around the 500/day mark, until just a few days ago when it jumped back up to a few thousand. After a prolonged period of social media silence, Hello Games spoke up this past weekend and announced the first major update to No Man’s Sky, the “Foundation update,” which adds in several features that probably should’ve been included in the initial release.

1. Build your own base
The biggest change is the addition of base building. Players can now use the resources they gather to build bases on the planets they discover, and customizable teleporters (another new feature) allow you to revisit your base at any time. 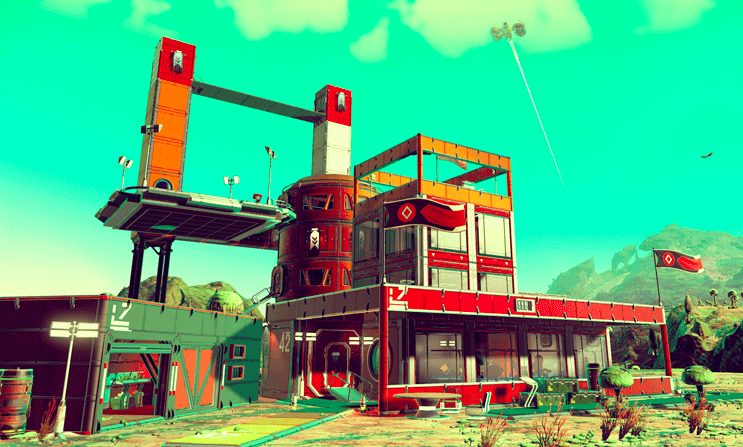 2. New game modes
In addition to the game mode released at launch, Hello Games has added in a more hardcore survival mode called Endurance and a mode without any limitations, called Creative. Creative mode looks to be similar to Mincraft’s creative mode in that players will have infinite resources in order to be able to build their base as big and crazy as possible.

3. Waypoints
Players can now place waypoints at interesting discoveries, allowing them to return to them whenever they wish.

4. Purchasable Freighter ships
Similar to customizing your base, you can now purchase a freighter ship and store resources on it. This is a nice addition to throw some variety into what you can actually pilot, since the “different” ship released in the base game were pretty much the same ship with a different shape.

5. Miscellaneous fixes
Better inventory management and graphics options are two of the other noteable changes that Hello Games has made. The inventory management being both clumsy and extremely limiting was a huge issue for many players at launch (especially given the necessity of carrying around so many different resources at all times, so the ability to stack resources in a single inventory slot is a much needed addition.

These changes add much needed direction to a game that lost much of its shine because of the incredible slog that it became. Whereas games like Minecraft execute the lack of story or goals well, falling perfectly in the butter zone between “too free” and “not free enough,” No Man’s Sky suffered from having a vast universe that contained only fairly limited opportunities. The Foundation update might change that, and if Hello Games continues to add features and generally commit to making their game better, there’s no reason why No Man’s Sky couldn’t end up being one of 2016’s best games. It just needs a little TLC first.