“Do you like walks on the beach?” Neil deGrasse Tyson jokingly asked when we sat down with him. It may be a stereotype of the scientific community, but one might not expect such charisma and humor from an astrophysicist. But it’s exactly this demeanor that makes Tyson so relatable, and in turn, makes astrophysics relatable.

From his book Astrophysics for People in a Hurry to his television series Cosmos, based off of the book by Carl Sagan, Tyson has become a prominent spokesperson for science promotion, education, and edutainment. In fact, Cosmos, a limited series that debuted with critical acclaim in 2014, is finally getting a second season, hosted once again by Tyson.

In addition to Tyson, this season will be helmed by returning Executive Producers Jason Clark and Seth MacFarlane.

Earlier this year, we had the opportunity to sit down with both Neil deGrasse Tyson and Jason Clark to discuss the current climate of science education, what made Cosmos so popular, and what fans can expect from this upcoming season of Cosmos: Possible Worlds, premiering on National Geographic on March 9, 2020. 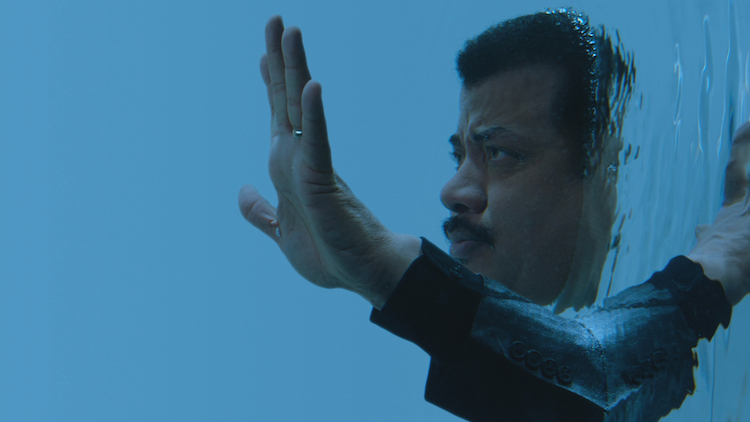 Host Neil deGrasse Tyson enters the Palace of Life, an imaginary place of ancient towers hidden by the mists of time and enshrouded in myth. Here, he moves into its largest, most ancient realm, to walk among the life at the bottom of the sea. (Cosmos Studios)

Innovation & Tech Today: Are you surprised at how much people love Cosmos?

Neil deGrasse Tyson: Yes and no. The “No, I’m not surprised” part comes from the fact that the recipe was already tested in 1980 and that recipe is the interplay of science and storytelling; representing science not as a set of different disciplines but as a tapestry of all branches of science becoming one because nature doesn’t split chemistry from physics from biology – it’s all intermingled in nature. Cosmos wove that tapestry and presented it to you in a way that mattered. In a way that you felt you weren’t simply learning from a documentary, you were being compelled to use this new wisdom that the show was sharing with you to try to make a better world for yourself and for everyone and that got tested in that series. That was an immensely successful series so we said, “Let’s do that again.”

Now, here’s a behind-the-scenes thing you don’t even know. It was not obvious initially that it was going to land on National Geographic or Fox in the 2014 incarnation and we took it around to various places and what they all said was, “Well, this is modern times, and we can’t use any writers from the original one,” and it’s like they don’t really understand, as Ann Druyan is quick to point out, there are people walking among us who have tattooed on their skin quotes from the original Cosmos.

And you’re going to say we have to bring fresh writers; bring in a young set because that’s your grandfather’s documentary? And Ann stayed strong on this and said, “No. We know what we’re doing here,” and it would finally land in the way it did where he had creative freedom to tell the story in the way we intended with the DNA that was traceable from 1980.

I&T Today: Right, and Seth MacFarlane really championed the series because he was such a fan of it?

Neil deGrasse Tyson: Of the original [series], correct. And he brought it to Fox and Peter Rice and the team. 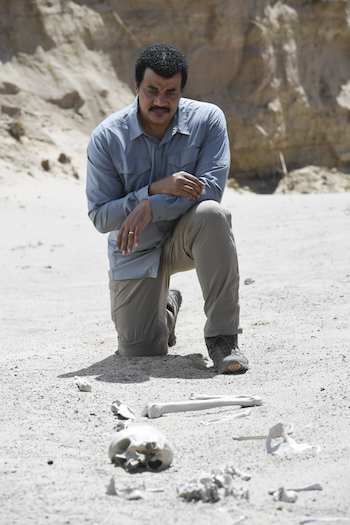 I&T Today: That’s an odd combination. Seth MacFarlane and Cosmos, where does that come from?

Neil deGrasse Tyson: I think that he saw what it could be and then he gave the support to allow us to create something that stayed within the voice. So that’s why I’m not surprised. But, I am surprised by how, holding aside Flat Earthers and vaccine deniers and the like, I remain surprised how large the science enthusiast community is today. Measured by several metrics, for example the attendance at Comic Con. Everybody at Comic Con is science literate top to bottom. They might have light saber sword fights at the bar, but at the end of the day they are not wondering whether the Earth is flat or whether the universe is 14 billion years old. Another example is the success of the TV sitcom The Big Bang Theory.

And another one is, why do I have 14 million Twitter followers? Everyday I wake up and ask, “Do you guys know I’m an astrophysicist? There’s still time to back out, you don’t have to stay with me, you know.”

I’m surprised but delighted that there’s this enthusiasm out there and it’s a matter of, “can we have that enthusiasm spread?” And with Cosmos, I know of no greater vessel to make that happen. Because of its reach, because of its multi-disciplinary tools that were brought to bear to tell the science stories that we do.

Jason Clark: And the score itself is created by Alan Silvestri, you know, who did The Avengers and Forrest Gump; one of the most incredible composers. And he went to London, to Abbey Road, and hired musicians to record the score and it shows in the execution and it creates an emotional connection to the story.

Neil deGrasse Tyson: And the director of photography was the same guy who did Independence Day and Stargate, so these are people with very real pedigree, and why would they just do something for TV science unless they were touched by the pre-existing legacy of what Cosmos represented to them and what they think Cosmos represents to the world.

I&T Today: And that passion comes through.

Neil deGrasse Tyson: Oh yes, and he says it better than I can because he worked more closely with them, but the energy level of the teams of people that came to work on it…

Jason Clark: Oh, we had people first and foremost.

Jason Clark: No, we had a thousand people around the world and were asking them all to, at a haircut price, help us out and they overachieved, painstakingly. I mean, there are versions of visual effects shots we did over 30 versions of because what we were doing is defining the scientific accuracy while creating a visual that would be exciting and pleasing and feel every bit as good as anything you would see in a big visual effects extravaganza, and we had exactly the same artists. We had guys who were designing spaceships, the production design team for the Star Wars thing who said, “Oh I want to do Cosmos, please let me get a ship in Cosmos, please let me do something for that.”

Yeah, it’s important to them, so that passion that you talk about, we were able to capitalize upon that with the artists that came to us because they were rooted in this in a way that was very meaningful for them.

I was profoundly moved by people’s reaction to the last season and I think this season with all these great artists and Neil’s performance, all of that exceeds my dreams for what we could have done. 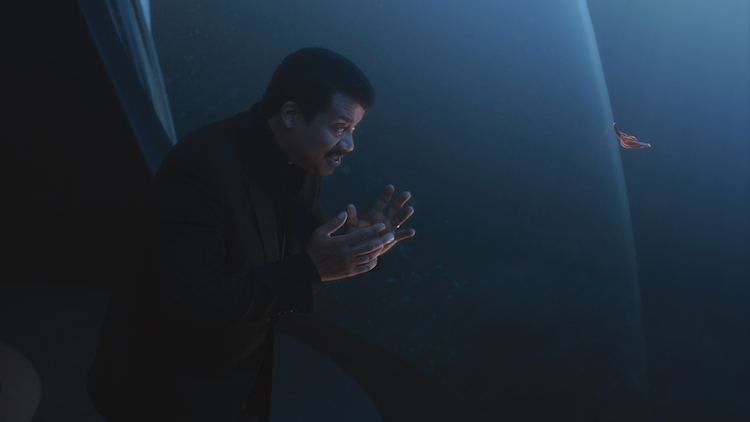 Host Neil deGrasse Tyson contemplates a flatworm, whose ancestors evolved some of the first brains, as it flutters in the sea outside the window of the Ship of the Imagination. (Cosmos Studios)

I&T Today: Do you think we’re in a golden era of science communication right now?

Neil deGrasse Tyson: I think we are in an era where we are figuring out the best ways to be science communicators, and I look on the internet each day at people who are doing experiments, who are doing things. You have other people who are not scientists – have you seen all the videos that are on Mentos and Diet Pepsi? That’s a chemical thing that’s going on and people are doing this. So it’s not that we’re at a golden age, it’s that we are rising up as more and more people are on this landscape who want to talk about science. We’re not at the golden age yet but we’re on the ascent to it.

Neil deGrasse Tyson: Well, there are segments of Cosmos that are slotted into classrooms. I don’t know if it’s because the teacher’s lazy or they really want to show it.

Jason Clark: I’ve had teachers come up to me… First of all, it’s very important to Ann Druyan, who created the show with Carl, that they inspire. When you get really focused you say, “Can we inspire one person, kid,” and to have teachers say, “I’ve played episodes to my class.” We went and talked to the school. I took Ann to a great school and these kids were geniuses. I mean it was remarkable the way and the depth at which they had received the information from the previous season, so hopefully it will happen again. There will be a complement education program that National Geographic is putting together, which will be really important and Carl’s son is going to be working on creating a curriculum for that.

I&T Today: Do you think that the younger generation is going to be the next greatest generation, considering the challenges they’re facing, like climate change?

Neil deGrasse Tyson: My answer to you is yes, because of their awareness of the role of science in their lives and in the health of civilization going forward. So, with people 30 and under, there are very few climate deniers in that community. Climate deniers lean older, but these younger people know what science is. Science gave them their smartphone and they can’t live without their smartphone and they are not in denial what that smartphone is doing for them and they also know that the smartphone talks to orbiting satellites around a spherical Earth.

So I think they are our best hope for the future. Now, Cosmos is addressing all generations and for me the most important generation, and I’m unorthodox in this sense, are the adults, because the adults are in charge now. They are in charge, they wield resources, they are shaping what the next generation is going to inherit, so they have to be influenced now. I don’t have the patience to wait around for my eight-year-old to become old enough to run for senate. We have to educate the senate now. So I think Cosmos has the strength to be potent at all ages, the visual storytelling and content latitude can touch people at all those ages.

Author Bio: Charles Warner is the CEO of Innovative Properties Worldwide, a veteran-owned media company out of Denver, where he is responsible for overseeing the company’s many areas of specialization, including custom publishing, sponsorship sales, onsite activation, audience development, ad sales training, and branded content. Prior to IPW, Charles oversaw a Florida media company that produced over 300 high-end event publications for some of the most prestigious sports properties in the world, such as the PGA, NASCAR, LPGA, NCAA March Madness, NCAA college football, the Super Bowl, and the World Series. Charles has almost 20 years’ experience selling print and digital advertising in publications of all sizes. Throughout that time, he has developed a consistent track record of recruiting, hiring, and training media sales professionals who have gone on to have exemplary careers. 1n 2010, Charles created Ad Sales101 to simplify the process for selling print advertising, while speaking to salespeople all around the country. Training and motivating sales teams remains a passion for him today.