Is the “Madden Curse” Real?

August is here, and you know what that means! Kids are going back to school, the days are slowly getting shorter, and millionaire professional athletes are openly complaining about their statistics in a video game. Yes, the newest iteration of the Madden franchise is here and gracing the cover is Patrick Mahomes, the 23-year-old stalwart quarterback with athletic talent that makes me feel bad that I get winded while eating breakfast in bed. However, with such a crucial football star gracing the front of the Madden box, it’s easy to wonder whether or not he will succumb to the now-infamous “Madden Curse.” A legend for the better part of two decades now, this phenomenon has taken recognizable NFL stars and thrown a total monkey wrench in their career. But is every player that dons the front of a Madden game destined for failure? Well, no, otherwise I wouldn’t have named the next section “The Good.” Anyways, here’s a look at some of the ways the “Madden Curse” may or may not have affected various NFL pros. 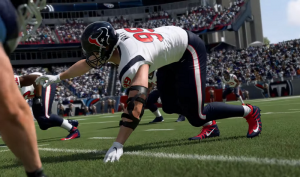 Not every Madden cover star immediately shatters every bone in their body on the first play of training camp. One example is last year’s Antoinio Brown, who put up impressive stats despite missing the playoffs and joining the dysfunctional Raiders in the offseason. Tom Brady and Richard Sherman both had good seasons in their years on the cover, despite both ending the year with a Super Bowl loss. And star receivers Odell Beckham Jr. and Calvin Johnson both lit up the stat lines in their years, they just had the poor luck of being employed by the Detroit Lions and New York Giants.

However, now we start to see the trend that has current Madden cover stars investing in lucky rabbit feet and hex-breakers. Most commonly, it’s injuries (Adrian Peterson, Donovan Mcnabb, Daunte Culpepper, and Shaun Alexander), mediocrity (Drew Brees, Ray Lewis, and Marshall Faulk), or both (Vince Young) that lead people to consider the effect of the Madden Curse. Troy Polamalu and Larry Fitzgerald shared the Madden 10 cover and, while Fitzgerald got through the season unscathed, Polamolu struggled with injuries throughout. One of the most interesting cases is that of Rob Gronkowski, the now-retired New England Patriots tight end who’s composed mostly of muscle and beer. Gronk missed most of his year due to injury, yet still got a Super Bowl ring to end the season. So he got all the reward without doing any of the work, something I aspire to do every single day of my life. 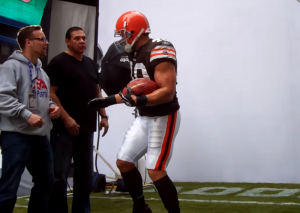 And now we come to the crown jewel of the phenomenon: Peyton Hillis. It’s safe to say that Hillis is known more for being “that guy that somehow got on the cover of Madden and then disappeared” than for his rushing prowess, especially considering the amount of articles written about him for being the epitome of the Madden Curse. The year he donned the cover, Hillis missed a game with a sore throat, was never given a new deal despite assurance from his team, and contracted a stomach virus that caused him to lose 20 pounds. While that’s all par for the course for a member of the Cleveland Browns, it’s not what you’d expect from a cover art star for a massive franchise. Joining Hillis’ bizarre, cursed tier was Barry Sanders, who mysteriously retired just before the start of the season, Brett Favre, who mysteriously un-retired before the start of the season, and Michael Vick, who was injured shortly before the season and years later, well, you know. Meanwhile, Super Mario’s been on the cover of all his games and yet nothing bad ever happens to him.

What Have We Learned?

Looking at the Madden stars over the years, it’s plain to see that, while I can’t guarantee there’s something supernatural going on, many players have unsuccessful (or bizarre) seasons after appearing on the cover of the game. However, it’s worth noting that the overall trend appears to be on the decline. The last “cursed” cover that we had was Rob Gronkowski, and even he got a Super Bowl ring that year. Before that, you have to go all the way back to 2011 with … Peyton Hillis. I feel like I said enough about him in the last section and he could definitely beat me up, so I’ll just move on. The point is, while the 2000s made the Madden Curse seem like the kiss of death, it appears that the curse has finally been lifted. At least it better be, because I just drafted Patrick Mahomes for my fantasy football team.

Is the “Madden Curse” Real?