How NREL is Fueling the Future of Clean Energy

Set in the idyllic foothills of Golden, Colorado, the National Renewable Energy Laboratory (NREL) has been developing sustainable energy solutions since 1977. The facility itself is a vision of efficiency and innovation, carefully designed to use minimal resources for maximum benefit. Engineers, entrepreneurs, and scientists from every discipline scurry between offices and laboratories, refining and perfecting the clean energy technologies of the future.

It was NREL’s advanced facilities that inspired the birth of Innovation & Tech Today. When Editor-in-Chief Charles Warner toured the facilities nearly a decade ago, he was inspired to share the technological innovations shaping the future. Now, five years after this publication was launched, NREL is continuing to bring ground-breaking technology to the world.

In 2014, NREL paired with Wells Fargo Foundation to create the Innovation Incubator (IN2), a program designed to facilitate sustainable development in the commercial building sector. There is a tremendous need for advancements in clean energy technologies, as building operations are responsible for more than 40 percent of all energy consumption in the U.S. In 2018, the program received Global Green’s Award for Innovation and Sustainability Efforts by embodying both company’s objectives – to build lasting relationships, provide expert guidance, and help work toward a larger environmental mission.

Wells Fargo has a substantial commercial building footprint, with facilities covering more than 90 million square feet across the nation. They have a vested interest in lowering energy costs for these facilities, but their commitment to the program goes beyond furthering their bottom line. Trish Cozart, project manager for the IN2 program, elaborated on what Wells Fargo Foundation brings to the partnership: “They have access to capital. They have investment knowledge and access, and they have a very, very strong commitment to sustainability.”

The Incubator’s main goal is to help clean energy startups make their technologies available for commercial application. Cozart explains, “We can take companies into the Incubator, give them $250,000 worth of technical assistance, and incubate them through the process so they can make strides to get closer to market. That $250,000 is worth far more than any cash infusion because they get access to world-class facilities, they can tap into the minds of brilliant researchers, and they get access to NREL’s network.”

IN2 is an invitation-only program, relying on channel partners to send company referrals. Applicants are chosen based on technology gaps which will have a large impact on energy and which have been largely ignored by investment communities. These early stage companies are typically in one of three development stages: Tier I (bench scale), Tier II (prototype stage), or Tier III (pre-commercial). Participation in the program often provides enough support to progress a company to the next tier or prepare for commercialization of their product.

The program is now in its sixth round, with 10 new companies joining the program in October, 2019. Some of the technologies to come out of the Incubator are already being beta tested at Wells Fargo facilities, such as Whisker Lab’s peel-and-stick energy metering system. The company’s technology reduces the time and cost for submetering. Their work with NREL helped them evaluate the trade-offs between accuracy and low cost of installation. 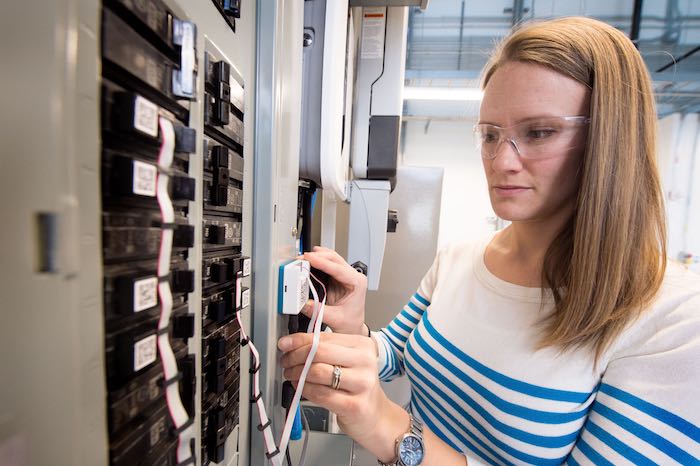 NREL engineer, Bethany Sparn attaches a device developed by Whisker Labs, to a circuit breaker service box at the SPL in the ESIF. (Photo by Dennis Schroeder / NREL)

Cozart shared how the company was able to test their product: “Whisker Labs went into a Wells Fargo bank branch, where they tested both the cost efficiency as well as the accuracy of the results that came out of a very simple peel-and-stick metering system.” Cozart continued, “In comparison, if you had an electrician come and install the full system, it would cost a lot more, but you might get slightly more accurate data, compared to this very simple installation. They were able to compare the cost of both of those installations and then take back the results and build a report to show what happened. Actually, from that beta demonstration they were able to adjust their market strategy. They’ve been acquired by Earth Networks now and even spun out as a standalone company.”

Once accepted to the program, the company and researchers at NREL determine a specific problem the company has to overcome in order to move forward with commercialization. Then they conduct projects over 6 to 18 months to determine energy savings for their markets and create new strategies for achieving their goals. The process already has several proven success stories.

NETenergy, a thermal energy storage company, is another startup that made it to market thanks to IN2’s guidance. COO of NETenergy Mike Pintar detailed the value his company derived from IN2: “The program provided us with expert resources that would have been very difficult for us to acquire on our own. First, to try to convince leading air conditioning resources to come work with a startup would have been difficult. Second, due to their reputation and their status as more of an independent third party, the work they’ve done has been very well received by industry partners. Combined, that’s been very helpful for us in our commercialization strategy and working with industry partners to bring our technology to market.”

The resources to which Pintar refers are often difficult for startups to obtain. In their beginning stages, many tech companies succumb to “the valley of death.” Cozart explains, “The first valley of death they encounter is called the technology valley of death. In that stage, they’re really starting with R&D or a concept. They’re trying to build a prototype but the financial resources or investment aren’t really there yet. To get them through that, they need expertise, they need equipment, and that’s a tough thing to afford. The IN2 program stands in the gap of that technology valley of death and builds a bridge across it.”

Related: The Power of the Sun, Part 1: What is Fusion Energy?

While developing their thermal energy storage technology, NETenergy found itself in a valley of death, trying to make their vision a reality but lacking the resources to realize their ambitions. They knew their creation could help commercial buildings control costs and balance energy supply and demand, but needed help to take the tech to market. They began applying to a series of competitions, like the Clean Energy Trust Competition, which ultimately led to their recommendation for the IN2 program.

They received their first round of funding and started working with engineers at NREL to refine the technology while working to build interest from leading industry partners and OEMs. NETenergy showed such progress that the IN2 program gave the company a second round of funding to ensure their innovations are adequately developed for commercialization.

Clean energy solutions, like NETenergy’s thermal energy storage, can play a key role in the next paradigm of the electric grid. These new technologies won’t just impact the commercial market, they have implications for local communities as well.

Ramsay Huntley, Wells Fargo’s Vice President of Clean Technology and Innovation, detailed how the Incubator is bringing tech solutions to local markets: “This lab is really focused on how to take technology from a bench in a lab to a commercialization state. What we believe in so much when it comes to working with the lab is rapidly scaling and commercializing these technologies. It’s one of the reasons we’re involved from the perspective of commercializing the technology on a Wells Fargo facility, where it makes sense. That way, it helps accelerate the company through that valley of death, gets them out the other side, and opens up the opportunity for them to receive investment capital, which then can scale them up and bring that technology out to local communities even faster than it might otherwise.”

Huntley offered this example: “One I’m particularly interested in is a channel partner called Next Energy. They’re an incubator in Detroit with a particular focus on bringing electric transportation technology to low- and moderate-income communities. So we provided a grant to them to work with a group in Silicon Valley on how they might bring technology that’s working today in Silicon Valley into a place like Detroit, with a low- or moderate-income community, and commercialize that technology in a way that’s supportive of the needs of a wide variety of different communities.”

The program is working exceptionally well to shorten the development cycles for new technologies. IN2 companies have already raised more than $174 million from external sources after participation in the program.

Pintar said of the experience, “They have a great team of experts in the air conditioning industry who have helped us to do the research and development and come up with a design to integrate our technology effectively.” Expert advice, connections, support, and technological enhancement all work in tandem to create a dreamscape for startups. Cozart summarized the program succinctly in stating, “For a clean-tech startup, the IN2 program is like doubling down on your future and winning. On paper it may look like $250,000, but in reality, it’s a priceless opportunity.”

This article was updated September 4, 2019 to reflect current statistics from the IN2 program.

How NREL is Fueling the Future of Clean Energy