How Jordan French is Increasing Coverage of Women in Tech

Women’s rights have come a long way over the last century. A hundred years ago, women in America were still fighting for their right to vote. Just sixty years ago, women were largely expected to be homemakers, taking care of the family, cleaning, cooking, and all the like. Now, women are leading companies and founding successful startups, among other things.

But inequality is still a huge problem, especially in the tech sector. In the 19th century, women worked as literal “computers,” calculating astronomy data at Harvard. The first general-purpose electronic computer, ENIAC, was programmed by an all-female team of mathematicians. Still, the modern-day tech industry is male-dominated.

Only 20 percent of tech jobs are held by women. Women are struggling even more in the startup scene, having secured just 2.2 percent of VC funding in 2018. And consider the recently released Rosenzweig Report, which found that of the 532 named executives at publicly listed companies in Canada, just 53 were women.

Grit Daily News’ Executive Editor and award-winning journalist Jordan French is trying to change that. French is leveraging his considerable connections with some of the biggest names in the tech and media industries to advocate for women through the news outlet he started that predominantly covers all things brands. Sometimes that means opening doors for aspiring women looking for investors or new career opportunities. Other times, it means using his own news website, Grit Daily, to – as he calls it – “tilt” toward covering up-and-coming women entrepreneurs and business leaders. 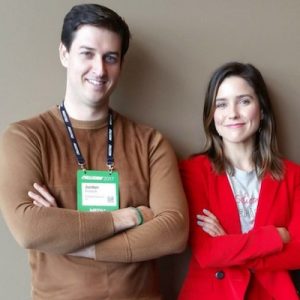 As French explained: “The fight for equality must be constant, you have to be all in, all the time. You can’t fight for equality on Monday but forget about the struggle come Friday. It’s going to take a lot of grit to put an end to inequality.” But that’s something French has in spades.

And as Tatiana Koffman, a partner at venture-capital firm FullCycle Fund, notes: “Jordan French supports women in everything he does – from covering female founders in tech to promoting female speakers. I see no particular driver behind his actions except a desire to promote a type of leadership we should all follow.”

Women are going to remain at the helm of the women’s rights movement and they’ll always be on the frontlines in the battle for equality. But an increasing number of men are recognizing that they too must play a role in helping women secure equal rights. In order to put an end to patriarchy once and for all, men will collectively have to change their mindset and recognize women as their equals.

Many already do. Through an eclectic career, French has studied law, worked at NASA-funded Mars Gravity, and co-founded six different companies. At each step of the way, he worked alongside women who were every bit as capable as their male counterparts. And yet, time and time again, French noticed that his female colleagues weren’t always getting the respect that they deserved.

Why do women continue to struggle?

Lisa Wang, founder and CEO of SheWorx, explained that “women continue to face both external and internal barriers as a result of long-standing societal systems and biases. Despite being more educated and ambitious than ever, they continue to be questioned on their style and ability to lead – explicitly this is evidenced by the abysmally low funding women receive – and more ubiquitously, by the implicitly biased questions even the most successful women get asked about juggling family and career.”

Most of Grit Daily’s journalists, led by Ideas Editor Yelena Mandenberg and Editor-at-Large Julia Sachs, are also women, and as the company grows, French expects women will ultimately lead the company. And as traffic continues to build – already on track to hit two-million unique views in its first full year – French intends to use Grit Daily to shed even more light on women, their struggles, their successes, and, of course, their brands.

Come June 4th this year, America will be celebrating an important anniversary. On June 4th, 1919, the 19th amendment, which extended voting rights to women, was passed by Congress. We’ve come a long way over the last 100 years but we have a lot further to go in the decades ahead.

And if we want to see true equality become a reality, we’re all going to have to pitch in.

How Jordan French is Increasing Coverage of Women in Tech