Escaping from prison has been a pretty consistent trope in pop culture. You’ve got shows like Prison Break and Oz and movies like The Rock, The Shawshank Redemption, and The Care Bears Escape From Alcatraz. Still haven’t seen that one. However, while it’s popular in other forms of media, we haven’t had that many video games about breaking out of prison. Until now, that is.

While I was scrolling around for a new app to try out, I noticed that The Escapists, the creation of Mouldy Toof Studios and Team 17 Digital Limited, was trending pretty high on the Google Play Store. So, in my endless quest to spend more time on my phone, I decided to give it a shot. 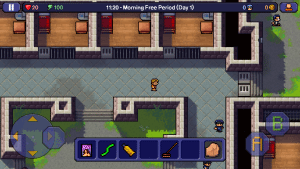 The game begins with a short tutorial in which you learn some of the basics of the game, such as controls and objectives. This tutorial also happens to include crawling through a vent and crafting a weapon with a bar of soap and a sock. Which is an ideal way to start any game, really.

After that, you’re thrown right into the beginning of your adventure with a (suspiciously) friendly note from the warden. From there, it’s all about exploration. You talk to your fellow inmates, boost your stats at the gym, and complete a number of missions in order to get coins and items to facilitate your escape.

The thing I instantly enjoyed about the game was the retro appearance. The Escapists utilizes a great NES/Super Nintendo appearance that works perfectly for this type of game. After all, if a game that centered around a prison went for a hyper-realistic kind of look, it might be a bit of a downer. 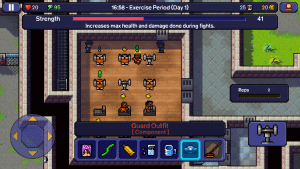 Something that I also enjoyed was the sense of exploration in playing the game. While it took a bit of getting used to, I began really enjoying the process of accepting missions from my fellow inmates. Especially the “cause a distraction” missions in which you wait until mealtime, walk up to someone, press the “punch” button, and run like crazy. It’s the little things in life.

The only issue I really had with the game was the controls. The mobile version of The Escapists utilizes digital controls, meaning there’s a simulated joystick and buttons overlayed on the screen. The problem comes when you actually need to be in an exact spot to talk to somebody or grab something. This could be fixed if, instead of emulating a joystick, they allowed you to choose a 4-directional d-pad in the style of Pokemon. However, this is a pretty minor gripe and won’t affect anyone playing the game with a controller. Unless you’re using one of those cheap third-party controllers. Seriously, just stay away from those. 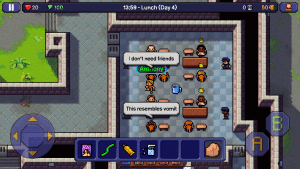 The Escapists is an engaging game with a lot of depth. Using a charming visual style and encouragement of exploration, Team 17 Digital Limited and Mouldy Toof Studios have created an adventure that will keep me busy on the bus for hours to come. And possibly give me a few tips on how to escape from prison. Y’know, just in case.

Featured image a screenshot from The Escapists