The scene is California, specifically Northern California, home to Silicon Valley and some of the most aggressive automotive regulations in the world. The hottest technologies on the market revolve around the autonomous car concept. Google has had its custom self-driving Lexus SUVs running around for years and has augmented them with low-speed fully self-driving tech that allows them to navigate the streets of Mountain View. And at least a dozen other startups and mature companies like Cupertino-based Apple and Oakland-based Uber are diving into autonomy as the Next.Big.Thing.

When it comes to vehicle autonomy, there are no small promises — zero accidents, more efficient freight movement, and greater mobility. The goal is to create a system that “drives more like a human,” achieves “100 percent accuracy,” and “superhuman levels of perception,” according to Danny Shapiro, Senior Director of Automotive at the data visualization company NVIDIA. Given these lofty goals, it makes you wonder how long it will be before we’re actually buying self-driving cars. Shapiro is coy on that subject, but he’s more than willing to inform you that his company is currently working with 80 different automakers. 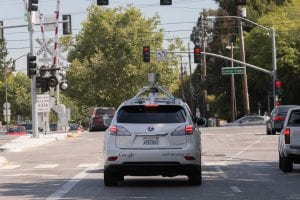 Really, with all this momentum, the question is not so much whether the goals will be met, but rather whether they’ll be met in Silicon Valley or somewhere more legally hospitable.

Self-Driving-UberIndeed, the California Department of Motor Vehicles has decided to create some new regulations for this fast-growing industry, ostensibly to help it progress, while protecting consumers. The result from the first round of laws (which outlawed driverless vehicle testing) was clear-cut. Instead of staying in Cali, Daimler/Freightliner demonstrated its self-driving truck in Nevada, and an Uber autonomous ride-hailing pilot started in Pittsburgh, PA.

The second round of the autonomous vehicle regulations by the California Department of Motor Vehicles was supposed to help usher in the ability to test and then deploy self-driving cars without drivers. In its draft form, many automakers cautiously endorsed it (with caveats), but the tech companies pouring their efforts into this arena blasted the draft, suggesting that it would push serious field work elsewhere.

Their objections were fundamental. As proposed, the new regulations would put the burden of getting permits for testing within each municipality for each company doing the testing. In addition, it appeared to expose a strict 12-month test period prior to deployment. These regulations also wouldn’t allow companies to shorten test protocols simply by using multiple vehicles in different situations. Finally, companies took the state to task for proposing that new automobile data recorders be made available to law enforcement within 24 hours of an incident without any warrant or subpoena. In all, California heard complaints from Google, General Motors, Volkswagen, Honda, Ford, and a group representing Google, Lyft, Uber, Ford, and Volvo.

When it comes to regulations, the state can either nurture innovation or stifle it by clamping down on the ability of innovators to operate. While claiming to want the latest and greatest from the auto world (particularly if it involves zero emission vehicles), California has taken a different tack with autonomous vehicles.

For instance, another surprising regulation from the DMV involved the prohibition of testing for vehicles with a gross weight greater than 10,000lbs. Since big rigs like the Daimler demo are the first likely market application of vehicle autonomy, this is particularly stifling. It also rubs against the work of another California state agency, the Air Resources Board, which is promoting the use of automated tech as a way to build a sustainable freight system, one that will include a more efficient movement of goods throughout the state and country.

DMV executive Jean Shiomoto said the agency would eventually get to the big trucks, but the pace of development means that initial testing and even the deployment of this technology may soon bypass California. Autonomous vehicles are edging closer to reality, but the companies creating the hardware and software that make them tick may have to engage some travel budgets to actually get things on the road.

So, regardless of what happens in California law, the bottom line is that self-driving cars and trucks are coming. They will save lives, but will probably cause accidents at some point. Any new regulations will have to be changed, much like the early ones that required a person to precede a car with a flag to warn anyone on horseback, so that our previous hoofed transportation wouldn’t be frightened. The country dealt with those and will deal with autonomous cars and trucks as well. We’ll learn along the way and we may not reduce congestion on the roads that much, but as Saffo observed—most of those cars and trucks crowding the future roadways may not have drivers in them.