There seems to be a common opinion that the dawn of drones means that many jobs are in jeopardy. Fearing a dystopian, jobless future, we have gained a bit of cynicism when it comes to our future-flying-robot-coworkers.

However, is that warranted?

Drones have already shaken up the job market. In fact, according to Business Insider, drones could someday replace $127 billion worth of labor in the United States. Most of this work is in agriculture, transportation, and infrastructure. While this does seem like quite a lot of work to be replaced by automation, that doesn’t necessarily mean that all those employees will simply be left out of a job. With all these drones in the workplace, there will be a need for management, repair, and, of course, manufacturing. A study by the Association of Unmanned Vehicle Systems International claims that more than 100,000 drone-related jobs will be created by the year 2025.

In addition to creating jobs, drones will replace many undesirable and dangerous jobs previously done by humans. Take for example forestry, in which human workers need to take on the physically exhausting task of lifting tree bags and planting saplings. This is not only a demanding occupation but a dangerous one, with a fatality rate over 20 times higher than the U.S. average. However, by utilizing drone work, this task can not only replace a challenging and unwanted job, but potentially save lives.

There’s no doubt that drones will change the job market. Let’s take a look at some of the largest industries that will be affected by the integration of drones in the workplace. 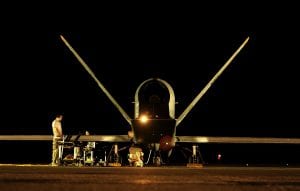 Drones have been used in the military since the early 1900s and were originally used as practice targets for troops. However, as technology advanced, drones were innovated to take on a plethora of tasks, including: spying with live audio and video feeds, being armed and used to attack and defend against other drones, surveying and 3D mapping landscapes, and even acting as surveillance in dangerous areas. In doing so, drones have opened up additional positions in military employment, from video surveillance to cyber security against drone hackers.

The most popular use for drones is spying and surveillance. The U.S. military utilizes drones to fly over foreign countries and keep an eye on dangerous targets. Men and women are trained to not only fly the drone, but also assess the live feed being shown to them. Further, there are individuals trained to monitor the drone’s information and ensure that it has not been compromised via hacking. In 2009, a U.S. military drone was taken over utilizing free Russian software. While the information that was revealed did not pose an immediate threat to national security, the U.S. military quickly corrected and updated their drone software. 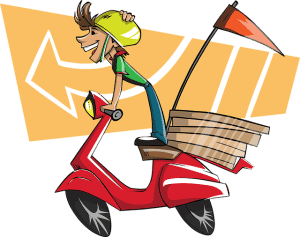 While it still seems pretty unbelievable, drone deliveries are the future. The company best known for this is Amazon. With their Amazon Prime Air project, the company hopes to be able to deliver packages in up to 30 minutes by drone, making 2-day shipping seem like an eternity. Google is also in the process of creating their own competing version with Project Wing.

In addition to basic packages, food delivery by drones will also be available to consumers. The popular fast food chain Domino’s has developed a drone specifically for delivering pizzas. Grocery store trips may also become obsolete due to scheduled grocery deliveries by drone. Not to be left behind, Amazon will soon be offering deliveries of fresh meat, if consumers desire.

However, we may still be years away from seeing pizzas and packages flying through the air. There’s currently no rollout date planned for Prime Air, as there is still plenty of development to be had. Additionally, there is no shortage of red tape, as the company is still working out legislation when it comes to flying.  Regardless, drones are the future. And that future will definitely make an impact on the 444,000 UPS jobs, either by totally replacing them or moving them into drone management.

Get The Perfect Shot 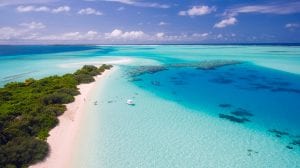 Mesmerizing views of European castles and beautiful panoramic shots of New Zealand fields can be provided to you by drones. Due to their efficiency, affordability, and portability, drones are now being used in the entertainment industry to bring consumers beautiful film shots, 360 degree news views, and opportunities to interact with the world around them. Even photographers are using drones to capture high-quality news, celebrity, and family shots. As such, employment has grown for individuals who know how to use, navigate, and understand drones and their software.

Quadcopters are the most popular drones used to capture these shots. Drones provide distance and elevation that normal cameras and their users cannot easily achieve. Due to their ability to fly overhead, images of big cities, such as Chicago, can be easily captured. News outlets, aware of this opportunity, have also used drones to create a 360 degree news environment for their viewers. With a swipe of their fingers, viewers can look around a prerecorded environment provided to them by a drone. This method is even being utilized by promotional companies, such as Warner Brothers bringing the fictional world of Harry Potter to life.

by Cyndy Hernandez-Martinez and Anthony Elio