While some might say the trucking industry is experiencing a watershed (where the direction of an industry changes), others would describe it more like a dam break, where suddenly we see a flood. In this case, the flood is medium- and heavy-duty big trucks moving to zero-emission technology. As late as early 2017, conventional wisdom held that, while some trucks at the lower end of the medium-duty segment might be electrified, big over-the-road rigs would power on with diesel for the foreseeable future.

Then things changed. The longtime producer of diesel engines (and some natural gas ones), Cummins, rolled out an electric Class 7 truck and announced that they would supply any powertrain their customers wanted, including those producing zero emissions.

Then Elon Musk unveiled his electric semi with his trademark high production, rivaling something from an auto show or CES. And the orders began coming in, topping 400 as of January 2018. First deliveries are due by the end of 2019, though most in the industry note that Tesla has yet to hit any of its announced delivery dates and hasn’t even released complete details on the truck or indicated where it might be produced. What Musk has promised is a $150,000, 330-mile range truck and a $180,000, 500-mile range model. Unless you want one of the early Founder’s Series models, which is “expected” to set you back a $200,000 deposit. 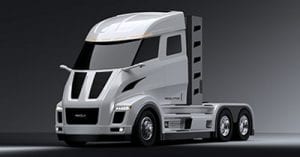 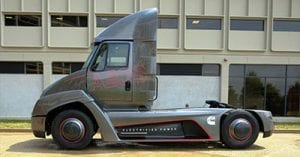 Another Path to Zero

Then another path was forged when Toyota drove into a press event with its fuel cell Class 8 truck hauling a full-length trailer. The truck featured two fuel cell stacks from a Mirai passenger car stuffed into a modified Kenworth truck (since Toyota doesn’t make heavy-duty trucks—currently). The truck puts out 670 horsepower, more than enough for typical heavy-duty operations, such as towing around 80,000 pounds of freight for more than 200 miles between fill-ups.

This truck fulfilled the dream of the state of California (where almost all of these new vehicle events took place). California’s stated goals are to see the transition of all trans-portation to zero emissions over the next few decades. Sooner rather than later, of course.

Toyota has since been joined by Kenworth, with its own hydrogen fuel cell truck, which made an appearance at CES. It was preceded by a one-off fuel cell delivery van for UPS and a fuel cell truck built by technology company US Fuel Cell. There has also been a wave of publicity about a range-extender fuel big trucks from another startup, Nikola Motor Company. It has some wild claims (a 1,200-mile range), but has yet to be tested or driven by any third party.

Infrastructure remains the Achilles heel for hydrogen fuel cells. While hydrogen is the most abundant element in the world, capturing it and turning it into transportation fuel is still an expensive process and is only being done in a limited way. California was hoping to have 100 public hydrogen stations by 2020, but lately has indicated that goal may not be met.

The electric truck scene has gone from zero-to-100 faster than a Tesla in Ludicrous Mode. What was an eco-dream a year ago is now a full-fledged movement. In addition to the Cummins and Tesla announcements mentioned above, two of the big boys in the big truck industry have made it clear they are not leaving this segment to upstarts or component makers.

Daimler led the way, putting its Class 5 eCanter model on sale in Europe, Japan, and the U.S. in late 2017. It packs a 115 kW electric motor and a 82.8 kWh battery pack (for comparison, a Tesla Model X 100D has two motors that equal about 386 kW and uses a 100 kWh battery) and a 62-mile range.  Fuso also showed the E-Fuso Vision One Class 8 concept truck. Daimler has made it clear that the real big rig is planned for production as well.

Volvo Group’s Volvo Big Trucks followed up in January with a statement that it would have a medium-duty all-electric truck on the market in 2019, although the first models were due to be delivered to early customers this year. The company also said the trucks would be coming to the U.S. at some point, with more details likely coming soon.

The significance of the two major OEMs—Daimler and Volvo—entering this electric parade is huge. Unlike Tesla, Nikola, and other smaller startups, these major players know truck customers. They know a medium or heavy-duty truck is not a fashion statement, but a bottom-line purchase. While some big companies buy one or a dozen for their PR value, most of the sales will need to pay their own way.

Batteries are still the key and a reliable charging network is equally critical for the heavy-duty market. Since an agreed-upon charging format for these trucks is still up in the air (two systems are currently competing with companies like Tesla, adding a third proprietary network), it will not be surprising to see the OEMs initial forays to be limited.

Batteries have advanced greatly in the past decade, dropping costs while increasing power density, but they’re still pretty heavy. The issue in the commercial market remains: given a choice between hauling freight or batteries, you can be sure most customers will opt for the former. The almost 24-hour duty cycle for many trucks also doesn’t allow much time to recharge batteries. But the gauntlet has been thrown down by Tesla and others. You can rest assured that your future Amazon Prime delivery may not involve internal combustion engines.  ■