Angela Bassett Enters the Game in Her first ever Video Game 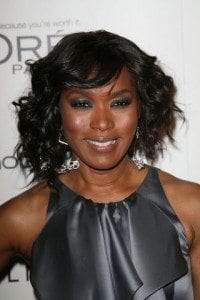 Angela Bassett is everywhere these days. The Academy Award-nominated actress has gone virtual with Ubisoft in her first-ever video game with Tom Clancy’s Rainbow Six: Siege. She plays Six, the first female agent of the elite covert operatives, and the commander of the team that players take the role of in the new first-person shooter action game.

The 57-year-old wife of actor Courtney B. Vance talks about all of these projects, and explains what has helped her navigate the challenges of Hollywood over such a long and diverse career in this exclusive interview from E3 in Los Angeles.

Angela Bassett: Perhaps growing up in a single parent household with just my mom…all the struggles that she had to go through to raise these two girls when she didn’t have a lot of resources and money. But she had a lot of reserve, and a lot of personal pride in herself and in her family. She holds you to this high standard that you have to meet, and she won’t take average as an excuse for not giving your best. I remember receiving that lesson from her. So it’s always translated into me not quitting, giving my best, being professional, being courteous, and just setting a high bar for myself in my profession, in friendships, and especially in my career.

When you’re 15 you certainly don’t have any mentors or any family members that you can go to who can say, “Oh, this is the path that you walk. Oh, I’ll knock on this door. Here, go and sit down and have a conversation with this person and they’ll take your hand and give you the ropes.” You have to learn them by yourself, and there’s something to that. Of course, you do get insight along the way. You say, “Okay, let me go to school. Let me try to learn so that maybe I’ll be the cream that rises to the top in a field where there’s so much competition and you want to be a survivor and you want to last.” And that takes a great deal of strength and fortitude and belief in yourself and in your abilities as well, especially when there are those that tell you it’s difficult. You know very few actors really make a living acting. But tell me I can’t do something and I’ll show you I can. So that attitude having to come up in those odds and those circumstances fuel that I can do it, I will myself to do it.

I&T Today: Games have a history of strong female characters like Lara Croft and Samus. What impact do you feel your Six could have on the over 50 percent of females who play video games today?

AB: Wow, over 50 percent of women play games?! That’s quite a big number there. I hope it will be an inspiration. I hope it will be just the beginning of more. I mean Lara Croft and Six that’s two huge women in games. I hope it continues to open the door and that more female figures are on their way.

I&T Today: Did you play any Rainbow Six games for preparation for the role?

AB: No, I didn’t, but I’ll certainly be playing them now after this, now that I’m a big part of it.

I&T Today: How have you seen video games open up new opportunities for actors today?

AB: This was actually my first introduction to it. I know some actors have been doing games, as entertainment is broadening. The last few years we’ve seen games evolve. This is the pinnacle. This is the top of the mountain. Acting is just so much more fluid now, be it film, or television, or video games, or Broadway. And I appreciate that.

I&T Today: How do you feel games have influenced what Hollywood film and TV shows today?

AB: The very successful ones, they take note of because it translates to what Hollywood understands.

I&T Today: How did working on Rainbow Six Siege compare to big budget movies like London Has Fallen?

AB: In London Has Fallen, you’re in a real car doing motion cap. In Rainbow Six, I was behind a little steel desk, not a real desk as we know it in an office, but something that simulates a desk talking to people I couldn’t see. In London Has Fallen we had two or three guys in the car with me, but what we were reacting to – the danger, the peril – we relied on the director to heighten the suspense, or to make sure that we were all in the same world and the stakes were really high. So we had someone yelling at us telling us what to do and we could play off each other in this same world on the motion capture stage. For the game, I couldn’t react off of someone else, but I did have to also rely on the director to get me exactly in the world and explain how high the stakes were. So they both relied on the director and your imagination.

I&T Today: We’ve seen a lot of TV shows turned into video games over the years. What would the American Horror Story video game be like?

AB: It’d have to be off the chain. I don’t know how many levels there would be, but it’d keep you up all night I’m sure. Fans really love the show, and it’s a little bit scary with a lot of campy humor. The game would be a little frightening. I don’t know if the gamer would be in the position of being led by Jessica Lange, but it could change. Every level could be different. We change season to season. I don’t know what that game would look like. I have no idea. Do you think it would be a good game?

I&T Today: It could make a survivor horror game with some humor in it.

Angela Bassett Enters the Game in Her first ever Video Game