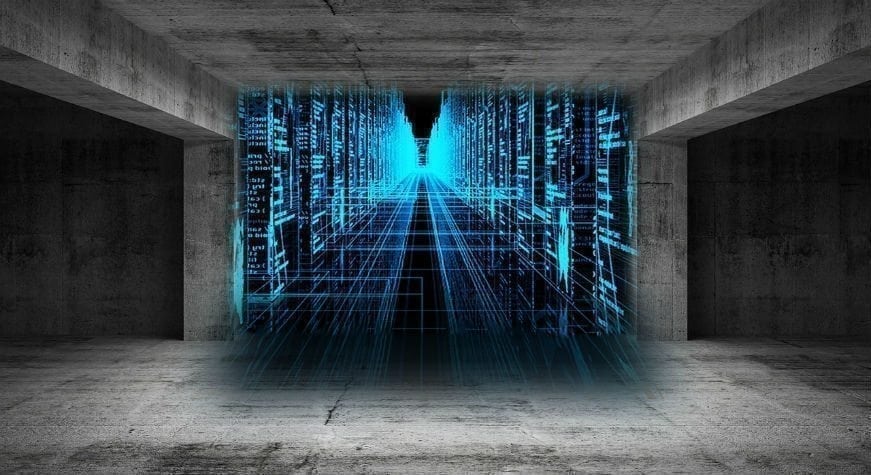 While Sony’s PlayStation VR, Facebook’s Oculus Rift, and the HTC Vive have brought virtual reality home, there are still some people who can’t afford the price of this technology or who are just waiting for VR to improve. Either way, this has opened up new business opportunities for the 21st century arcade. For instance, companies like IMAX, Starbreeze and Zero Latency are building out a new network of arcades designed to showcase existing and cutting-edge virtual reality technology. 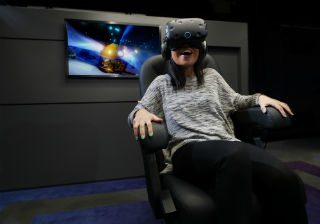 “There are a lot of VR-curious people who don’t want to spend $1,000 to try it at home, which is helping us a lot,” explained Tim Ruse, CEO of Zero Latency. “Initially, a lot of VR developers were coming through to play. And now a lot of people are just coming through to try something new with friends. We’re seeing a lot of repeat customers where one friend will come with a group and then that group will come back with different friends.”

Melbourne, Australia-based Zero Latency is the first company to introduce multiplayer free-roaming VR gaming in massive arenas (which range from 2,000 to 4,000 square feet). The company has built out the software platform, designed a trio of video games that pit players against aliens, zombies, or killer robots, and created much of the technology for the experience.

While home-based VR systems tether you to a PC or console, Zero Latency has worked with Alienware to craft a super-light and powerful backpack PC based on their Steam Box technology.

Scott Vandonkelaar, CTO of Zero Latency, said the rendering of visuals are done locally, while over-the-air gaming network communications can transfer some of the gaming info wirelessly, which allows the system to have multiple players. The company has tested 16 players in its Melbourne location, although six to eight players is the sweet spot based on the current arcade sizes.

Available at 10 locations worldwide today with 14 more opening by the end of this year, Zero Latency has created an immersive experience that begins even before you step into the video game worlds. The heart of this experience is the Game Master, named after the traditional story crafter from Dungeons & Dragons. He or she brings you into an equipment room where you’re outfitted with a vest and backpack, head-mounted display, and headphones before being handed a replica assault rifle (which morphs into four different weapons in each game). This Game Master serves as your guide inside of the arena as well as on the video game fields of battle (which right now includes a burned-out city overrun by zombies in Survival, a giant alien ship filled with robots gone awry in Singularity and an alien world minus the laws of gravity and conformity in Engineerium). 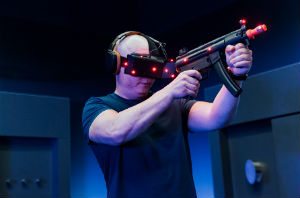 IMAX has launched a half-dozen IMAX VR Centres across the world, including its flagship location in Los Angeles. While there are definitely VR video games inside of each of these buildings, IMAX is promoting themselves as VR entertainment offerings and tapping into its Hollywood relationships. Right now, these facilities have room-scale HTC Vive games as well as Starbreeze VR offerings designed exclusively for IMAX (which means enhanced visuals, more action and a larger 210-degree field of view through the headset). For example, while the first-person shooter John Wick Chronicles is available on HTC Vive at home, Starbreeze created an enhanced Arcade Edition designed to provide more focused action with an MP5 replica gun within a shorter period of time (12 minutes) for the IMAX customer.

“Our home version comes with a significantly longer game,” Brooks Brown, global director of VR at Starbreeze , said. “We take the levels from the home experience and add a lot more lighting effects and particle effects for the Centre. It’s a bit of an exploration now with fine-tuning the right content for location-based gaming. The more people play, the more we’ll learn what they like and don’t like.”

Brown said tapping into Hollywood films and TV shows will be a key theme for IMAX VR games. Starbreeze is developing a VR shooter based on The Walking Dead for IMAX. And the game maker is working with Lionsgate and other Hollywood studios on additional games. 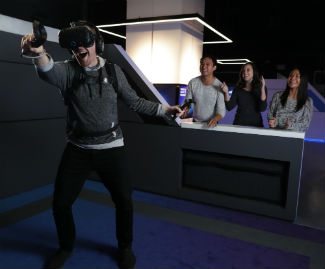 Plus, these IMAX Centres will feature games from other developers. Skydance Interactive launches Archangel this summer. The original near-future shooter puts players in control of 60-foot-tall Mechs and sends them into combat. Like everything else in this space, the actual gameplay will evolve over time. Skydance Interactive president Peter Akemann said the game will launch as a single-player experience but over time he’d like to expand it into a multiplayer game with giant Mechs battling across a near-future setting.

IMAX has an aggressive plan to increase its VR footprint. Lister said after this initial testing phase, the company can retrofit existing multiplexes and work with partners to get 100 VR facilities operational by next year.

And there are other companies exploring the VR arcade concept, including Salt Lake City-based The Void, which partnered with Sony Pictures last summer for a Ghostbusters four-player experience that was set up at Madame Toussad’s in New York City. That company is opening a VR arcade this year in Salt Lake City with plans to replicate that multiplayer concept around the globe. Ironically, before IMAX entered the VR space, The Void executives referred to their concept as an IMAX-like experience, meaning multiple VR games to choose from in different “pods” or gameplay rooms.

All of this competition ensures that VR arcades won’t go the way of the traditional arcades, at least not any time soon. Even when the cost of entry for home-based VR comes down (as it will over the next decade), the types of multiplayer experiences players can participate in with friends in large arenas will remain unique. And like traditional arcades, people will go out to hang out with friends socially – both in VR and in the real world.