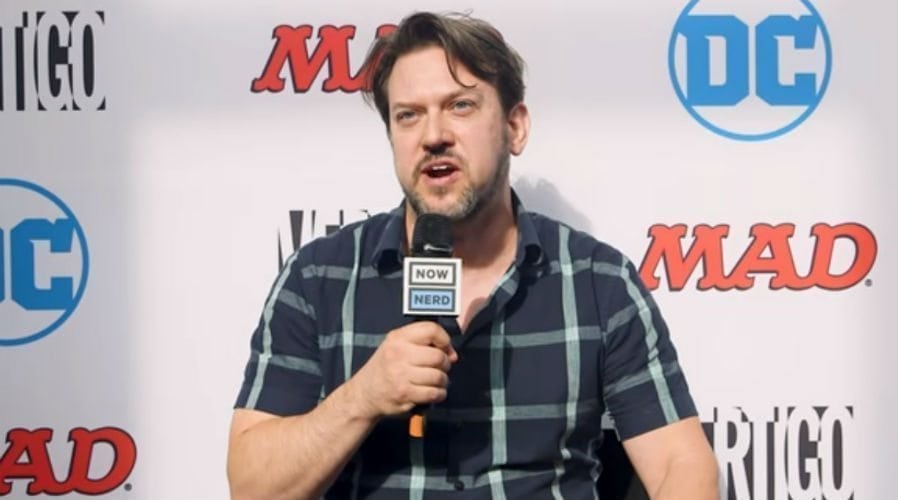 Having worked on the modern and insightful comic book reboots of such franchises as The Flintstones and Snagglepuss (no, seriously), comic book writer Mark Russell definitely knows how to use his unique gifts. In this exclusive interview, we discuss his interesting introduction to the world of comics, the modern state of the industry, and his personal favorite work.

Mark Russell: I wouldn’t say this is a sure-fire way to break into comics, but I had been writing Count Chocula fanfiction on my Facebook page when a friend-of-a-friend, who happened to be an editor at DC Comics, saw it and asked me if I’d be interested in writing a comic book about a teenager who becomes president. That offer is just weird enough that you can’t really say no, so I ended up writing Prez for DC, which led to bigger things.

Mark Russell: I draw inspiration from my real-world interests outside of comics. If all you care about is comics or pop culture, then what you write is probably going to feel like a combination of familiar industry tropes and cliches pulled at random from a bingo ball tumbler. So I try to rely on my interest in things like history, politics, anthropology, and so on for my storylines and character ideas when writing comics. Using comics to write about the outside world enriches both realms, I think.

I&T Today: What is your process for working on a new comic?

Mark Russell: I create a “Bible” which, not to be sacrilegious, is just a collection of character descriptions, plotlines, and dialogue which may or may not go into the comic. After pouring out a few pages of random ideas, a theme or two usually emerge, from which I create an outline for several upcoming issues. But I only use the outline as a starting point. I don’t really feel honor-bound to stick to the outline when writing. I change the story depending on what feels the most relevant and exciting to me at the time. I never really know what I’m going to write until it’s finished, so I’m more like a kid riding a rollercoaster than a bus driver methodically following a route. Which is more fun for everyone, I think.

Mark Russell: The Internet has obviously had a profound, Faustian, effect on comics. Not only in changing the distribution model, allowing the reader to download comics digitally, or get their graphic novels without ever having to set foot in a store, but also on the relationship between comic creator and fan. The comics press today not only consists of a few large outlets, but also thousands of bloggers and YouTubers, and millions of tweeters, any of whom can let you know just what they think of your comic at any time. So this has had a dual effect of bridging the gap between creator and fan, turning the medium into less of a Peter Frampton arena rock experience and more of a punk concert in a crowded bar on a stage that’s only three inches off the ground, which is good, by and large. It’s okay to take risks because even if only a few thousand people will like your work, they will find you. On the other hand, it also makes creators and industry professionals a lot more vulnerable to harassment and trolling if they’re doing work that some people find upsetting (and what’s the point of writing something if it’s not upsetting somebody). And this can be terrifying. The sort of instant access to creators that social media gives people is a pretty new phenomenon, less than ten years old, and hopefully, someday we figure out a way to keep the benefits this technology brings without the trolling that comes with it. But for now, I think we’re still in the “Reign of Terror” phase of this revolution.

Mark Russell: Don’t wait for your big break. Start creating on your own. Draw a web cartoon. Publish a zine. Write your Count Chocula fanfiction on Facebook. Not only do you need time and work to hone your craft and build a well-spring of ideas, everything you put out into the world is like a little lottery ticket. You never know who will see it, love it, and reach out to you with the next opportunity.

I&T Today: Is there a project you’ve been a part of that you’ve always regarded as your personal favorite?

Mark Russell: I think my first book, God Is Disappointed in You, in which I condense every book of the Bible and retell it in modern English, will always have a special place in my heart. Not only because it was my first, but because it was a labor of love I spent every day for three years working on, and because it was a collaboration with a good friend (Shannon Wheeler, of Too Much Coffee Man and New Yorker fame), and it feels more relevant than ever, if I do say so myself.

Mark Russell: I am currently working on a new series for DC Comics. Exit Stage Left: The Snagglepuss Chronicles, which recasts the Hanna-Barbera lion as a gay Southern Gothic playwright who has run afoul of the House Committee on Un-American Activities in the 1950s. Which, admittedly, sounds like a terrible idea, but the terrible ideas are always the most fun. It’s also been some of the most challenging and rewarding writing of my career and I’m very proud of where we’re going with it.

WeAudition.com Becomes A Lifeline for Actors During the Pandemic