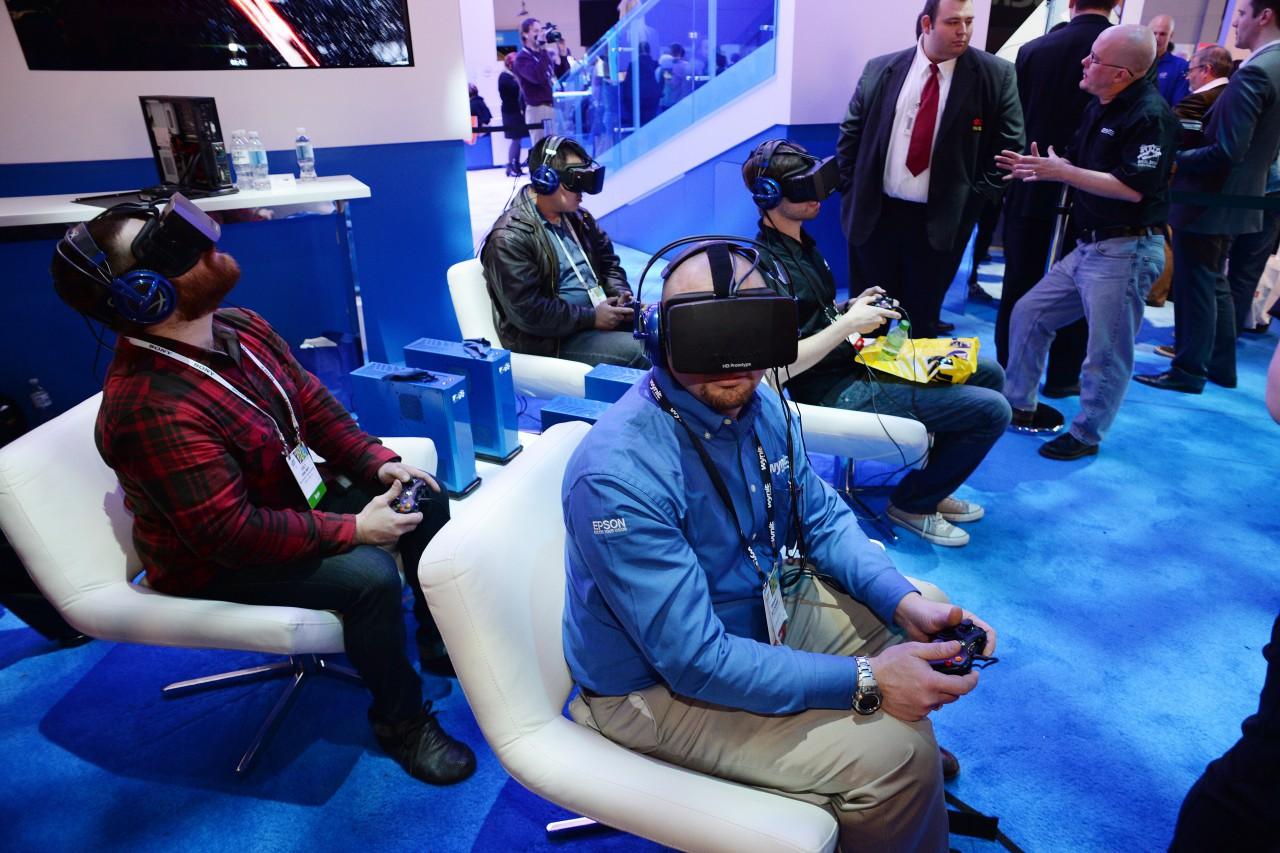 After making a cameo appearance at International CES in 2014, Virtual Reality became one of the most popular aspects of the show.

Teleportation is strictly for the sci-fi movies. However, more than twenty companies at International CES 2015 showed how we can be anywhere in a virtual world, at any time. Virtual reality transports the user to either a real spot on Earth or some imaginary fairytale place — without ever leaving the home.

VR is made real by a powerful new software paired with a head mounted display, or HMD, similar in size and design to a ski mask. These headsets come equipped with trackers that follow the head’s position, and translate it to an electronic positioning that developers use to implant viewers into a simulated environment. Some system designers have also combined VR with augmented reality, overlaying a virtual world onto the real one.

“I think this is going to change everything,” says Jason Rubin, Head of Worldwide Studios at Oculus VR, an industry leader recently acquired by social media powerhouse Facebook. “I think it’s a medium for doing other things.  When you put on a rift, suddenly you have the biggest TV in the house.  It really changes everything, in education and in entertainment.”

Case in point: the Oculus Rift Crescent Bay prototype demo entered a new, immersive level with 3-D sound and positional head tracking. The demo is so believable, people have actually been known to exhibit the signs of vertigo while “perched” on the edge of a virtual skyscraper.

Developed using Epic Games’ Unreal Engine 4 technology, the demo showed off brand new 360-degree VR Audio by allowing users to experience a T-Rex on the loose a warehouse and then placing them in the middle of a street battle between futuristic police and a giant robotic alien boss. All the while, the sounds come from every direction, changing per your “location,” thanks to the HRTF (Head Related Transform Function). Oculus showed off this technology on both its PC-based device and Samsung VR, the mobile HMD. Adding immersive audio to the already mind-blowing VR visuals keeps Oculus at the top of the game in these early days.

VR’s platform offers an ever-widening range of uses, from personal to professional. That expansion capability was in full evidence at International CES 2015. Several 360-degree cameras were on display, viewed with the Samsung Gear VR, making armchair travel even more alluring. As well as repair work. Sulon’s Cortex brings a potentially killer solution for mechanics, especially in this day of electronics systems. Their product pulls hundreds of engine parts “apart” for easy manipulation, troubleshooting, or training.

That said, VR has been most embraced by the gaming industry due to its immersive, real-life experience that satisfies the hunger of teen- and young adult-centric gaming crowd while offering hidden benefits. The Virtuix Omni utilizes sensors on the player’s shoes to translate movement into virtual propulsion. In just one hour of game play, the user can move up to 3.5 miles and burn as many as 400 calories — a nod to fitness we have never heard from the gaming world.

Meanwhile, gaming powerhouse Razer launched their new Open Source Virtual Reality, or OSVR, device at CES. Developers or users can change any part of the device, adding the ability to track the users’ hands or any other feature they may want. “I can imagine a time when your doctor doing a checkup on you and be able to use this framework to access data about yourself and see it,” says Nick Nassiri, Mobile Software Development Manager for Razer. “The core is getting it right on gaming and then the rest will come.”

Along with this, open source allows fellow gamers to stand side-by-side while immersed in the virtual world. “It’s not only a platform for making video games that are specific to VR, but a great venue for playing video games that are in another space on a giant screen socially next to somebody who isn’t there and otherwise augmenting what already exists,” Oculus’ Rubin says.  “It’s a fundamental change to the game.”

Virtual reality offers opportunity for innovation in the movie business, too. Imagine being able to look around and feel more immersed into the story. This new format requires a new way of storytelling, since the viewer, not the director, chooses what to look at and when. Fox Searchlight Picture’s three-minute live action documentary about the Cheryl Strayed book starring Reese Witherspoon, The Making of The Wild, explores the power of 360-degree VR movie making.

As for education? “The potential of VR in education is massive,” says Rubin. “It’s just going to be a huge platform.” From business training seminars at home, to seeing what it would be like to scale Mount Everest instead of reading about it in a textbook, the possibilities are limitless. “For the real estate market, suddenly you can tour a house without every having to set foot in one,” adds Rubin.

Plenty of companies are working to create ways of virtual artistic expression and education, not just entertainment. One is HP, which is moving virtual reality creation onto desktop computing. “HP’s Zvr is an immersive and interactive real world virtual environment,” explains HP spokesman Jim Christensen. “It is the product of many years of technical advancements that have enabled the creation of an environment where the user can be fully engaged, comfortable, and interactive in a virtual space.  The applications are wide and far ranging, including education, simulation and training, medicine, eCommerce, and communication.”

“The virtual reality industry needs to make an effort as an industry to let people know what the benefits and challenges are,” says Manuel Gutierrez of Novelo, co-founder of ImmersiON-VRelia, which unveiled The GO. This smartphone-powered, head-mounted display, paired with Viaplay’s Gamepad-F2, makes it possible to navigate without touching the phone.

“The science is being discovered,” admits Rubin, when assessing where VR is today.  “We’re learning as we go.”

LIAM KIVIRIST recently completed his first computer build of a Hackintosh, and is developing a Unity game, Highblood: The Last Guard. A feature writer for Time for Kids, he is based in Wisconsin. John Gaudiosi also contributed to this story.