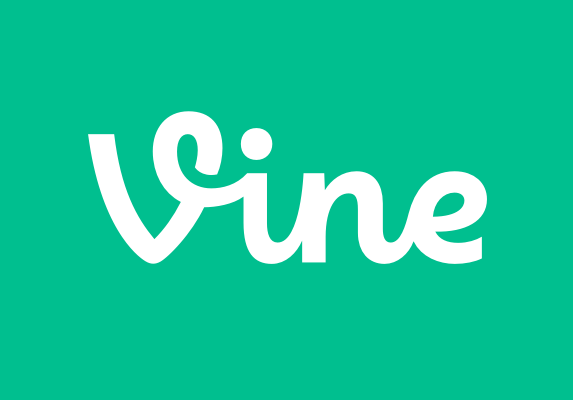 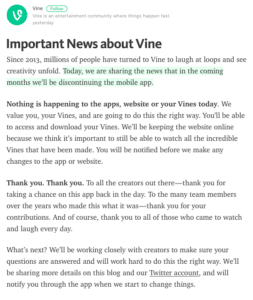 At a time when apps are ubiquitous, it’s hard to imagine them ever not being available. I’m still surprised and a little saddened when I search for an old app I used to love on the App Store only to find that there are no results. Facebook, Twitter, Instagram, and Snapchat have all become staples of the social media toolkit, and for a while, Vine, the six second video sharing app that Twitter acquired in 2012, was also on that list. But in an announcement yesterday Twitter said that it will no longer be continuing support for the app. This move serves as a reminder that even when the internet seems like it’s forever, it isn’t. Sure, those photos that you posted on that one internet forum 10 years ago are probably still there. But services offered through the internet can still close up shop, just like a good ol’ brick and mortar store.

Earlier this year, Twitter Inc. reported its slowest revenue growth since going public, continually struggling with decreasing user growth and quarter after quarter of being unprofitable. Make no mistake, Twitter is making hundreds of millions of dollars in ad revenue a year; it’s just that their stock-based employee compensations have been costing them more than they make. As TIME reported in February, Twitter posted losses of $250 million in 2015, and nearly $2 billion since its launch. Even though their adjusted earnings (which don’t include compensation) show them in the black, it’s not a model that they can sustain indefinitely. It’s not clear exactly why Twitter is making this decision, but it wouldn’t be completely insane to attribute the move to their struggling revenue stats.

The rise of Snapchat, and more recently Instagram’s Stories feature, may also be to blame. Twitter has always sort of been that secondary social network, and in acquiring Vine it may have put it in a similar position.

Regardless of the reasons, Vine will surely be missed. Boasting 200 million users at the end of 2015, Vine certainly has no shortage of people who will mourn it. Luckily, though, for both Vine fans and content creators, Twitter is planning on leaving the site up — at least for now — so that people can continute to view their vine videos.