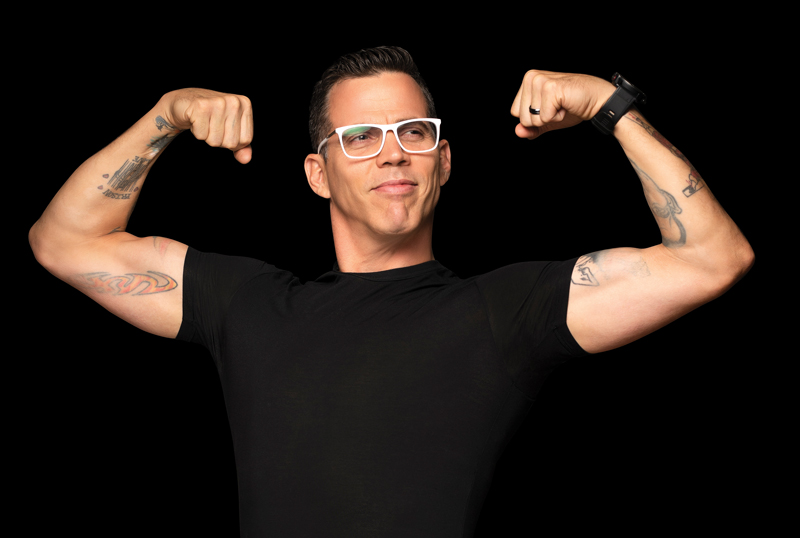 More than 20 years ago, a young man walked onto our screens in a black t-shirt with a grin that spelled trouble. He was holding a bottle of water containing a goldfish. Steve-O was his name.

He promptly drank and regurgitated the goldfish, and it started swimming. That was the world’s introduction to Steve-O.

Through years of outlandish (and occasionally gross) stunts, he has a name and face that are instantly recognizable. No matter who you are or where you live, odds are that you’ve witnessed him doing something that carefully teetered the middle ground between insanity and hilarity.

While the wild Steve-O is still there, in recent years we’ve begun to see the creative side in a different way. He, Stephen Gilchrist Glover, has become more than an entertainer. Now, he’s taking the stage as an entrepreneur with a renewed spirit and insight on himself both as Steve-O the entertainer, and Glover, the man.

Following a years-long, very public battle with substance abuse and a variety of new endeavors, America’s favorite punching bag has found himself in a career resurgence fueled almost entirely by his own entrepreneurship.

With Jackass Forever just hitting theaters, Steve-O finds himself the busiest he’s ever been. From his top-rated podcast “Wild Ride! With Steve-O” to The Bucket List Tour, he is finding a new path — and some new passions.

Steve-O built a tricked-out mobile podcast studio where he interviews his guests — and he has had some impressive guests. Post Malone, Tony Hawk, Shaq, Tom Segura, Mark Cuban, and nearly 100 others have joined him on the show — and they all make for great listening.

Jackass Forever is nothing to glaze over either. Between Celebrating the joy of being back together with your best friends and a perfectly executed shot to the dingdong, the original Jackass crew return for another round of hilarious, wildly absurd, and often dangerous displays of comedy with a little help from some exciting new cast members. Johnny and the team push the envelope even further in Jackass Forever.

Innovation & Tech Today recently had the chance to sit down with Steve-O and chat about his career, his craziest stunts, and how all of those things led him to where he is today.

Innovation & Tech Today: When I look back at how you guys started on MTV, I think of the Jackass crew as pioneer content creators. Just a group with a camcorder putting out raw, barely edited footage. Did you ever see that type of content becoming the mainstream like it has?

Steve-O: Everyone who was serious about skateboarding in the ’80s and or ’90s got a major head start at content creation, albeit with crappy VHS video cassette tapes. Skateboarding was the only activity that inspired almost all of its practitioners to film and edit videos of themselves (in hopes of landing sponsorships.) Professional skateboard videos were loaded with crazy shit long before Jackass came around.

It was actually a skateboard magazine called Big Brother, and the videos it produced, which gave birth to Jackass. I never doubted that the stuff we did for the Big Brother videos would be popular with a mainstream audience. I just never believed the stuff we were doing would ever be allowed on television. In fact, it wasn’t, but we found creative ways to operate within the rules we were forced to follow.

I&T Today: This last couple of years, you’ve seemed like a guy still rising to his peak but with a renewed energy. Do you credit anything specific for that?

Steve-O: Thanks for the kind words! The main thing I credit for everything I have going on now is finally getting off my ass, learning how to edit videos properly on a computer, and starting my YouTube channel back in 2013. That allowed me to take charge of my own career, no longer needing permission from network or studio executives to do anything.

I&T Today: I know you released an NFT earlier last year. Any thoughts on giving that a try again?

Steve-O: When I heard some of the crazy numbers being attributed to the sale of NFTs, and then spoke with Mark Cuban on my “Wild Ride! with Steve-O” podcast, I had to give it a try. Sadly, it seems I’m not quite popular enough to generate the kinds of numbers I saw in the news (and that’s putting it really mildly), but there’s no reason I shouldn’t keep trying to sell more!

I&T Today: How has it been aging and going back to make Jackass Forever?

Steve-O: Ha! I’m pretty sure aging sucks, no matter who you are! With that said, I’ve been getting by surprisingly well, so far. I’ve managed to avoid any permanent debilitation, and I never stopped doing high-level stunts. Of course, all of my most serious injuries have happened within the last five years … I honestly don’t know if that’s because I’m becoming frail, or because I’ve kept raising the bar with my stunts. Probably both, and I think it’s safe to say that’s why Jackass Forever involved so many trips to the hospital.

I&T Today: I’m sure it’s great to reconnect, but is there ever a sense of dread for what you might do to yourself?

Steve-O: I don’t have to reconnect with the Jackass crew to dread what I might do to myself, but being with all of the guys certainly intensifies that dread!

I&T Today: How much time and planning do you put into a new stunt?

Steve-O: That totally depends on the stunt. For some, there is quite
a lot of planning, but for others,
it’s zero.

I&T Today: If you could take back any one stunt you’ve done in your career, what would it be?

Steve-O: There’s no stunt I would want to take back, but there were a bunch I wimped out on, that I’d love another crack at.

I&T Today: On the flipside, is there one that is an extra special memory?

Steve-O: To answer that honestly, I have to sound like a real douchebag because I have so many special memories of my career; it’s staggering. I can’t even express the gratitude I feel for the life I’ve managed to live. It’s truly fucking insane how many lives worth of experience I’ve squeezed out of this body.

I&T Today: You’ve never made a secret about your journey to sobriety, and your story is a particularly inspiring one. Was it difficult to separate Steve the person from Steve-O the persona?

Steve-O: As much as my journey in recovery has been about staying abstinent from all mind-altering substances, it’s also been an exercise in precisely that: finding separation between the persona of “Steve-O,” and the person who I really am. When I first got clean and sober, I had no clue who I really was. I had no ability to turn off my persona and, ironically, my persona suffered from that as much as I did.

I first realized that if my self-esteem and self-worth are tied to being “Steve-O,” my potential for true happiness is basically non-existent. With the modicum of progress I’ve made in finding that separation from Steve-O, I’ve learned to be much more calculated and strategic about managing my career. It’s pretty crazy that what’s worked for Stephen Glover, has worked even better for Steve-O.

I&T Today: So, what can people expect from the live show?

Steve-O: Earlier today, I had our Jackass director, Jeff Tremaine, over to my house to screen a recording of a live show from my Bucket List tour. It’s a multimedia comedy show about how I’ve been racing against the clock to pull off the craziest stunts of my entire career — before I get so old that it becomes creepy to watch.

After each bit in the show, I screen the footage of that item being “checked off” my Bucket List. The idea today was to see what Jeff Tremaine thinks about directing my Bucket List special, and pitching it to Netflix with me. After he finished watching the hour-long show, he said, “I just don’t see how Netflix could show this. It’s so fucked up, from beginning to end.”

That’s just the opinion of our Jackass director, but what is an objective fact is that, in virtually every city I bring this show to, at least one full-grown man faints in the audience. I’ve never heard of people fainting!