We would like to thank Karin Konoval for taking the time to give us some insight on the Planet of the Apes franchise and “Maurice” to whom she lends her considerable talent.

Innovation & Tech Today: This is your third time playing Maurice in the Planet of the Apes films. How do you believe the character has changed throughout the series?

Karin Konoval: I don’t think Maurice has so much changed as grown more and more into himself through the journey of these three films. What I mean is: before meeting Caesar in the San Bruno facility in Rise, Maurice had previously been a performing orangutan in a circus and most distrustful of not just humans, but of everything. In connecting with Caesar (who understood sign language, like Maurice) I think that was possibly the first truly meaningful connection in Maurice’s life. The friendship and trust that has grown between them since then has encouraged Maurice to become willing to express himself, to engage with the ape community, and beyond that to also make significant connection with two humans – the boy Alexander in Dawn and now Nova in War.

I&T Today: Do you remember your very first experience with motion capture? What was that like?

Karin Konoval: Playing Maurice has been my only experience working with performance capture technology. To be clear, the challenge of the role is to play a mature male orangutan character in all of his physical, psychological, and vocal integrity. There’s no particular challenge for me as an actor with the technology itself – what’s challenging is playing Maurice! And Weta Digital’s brilliant work in capturing our performances has grown increasingly sophisticated and even more meticulous with each film. That said, I can tell you that the first time I tugged on the grey “pajamas,” got body wired with all the battery packs affixed to various places down my backside, and put on the helmet with face cam, I looked in a mirror and thought, “Well, this outfit sure couldn’t be any less flattering!” But very soon you kind of forget about what you’re wearing and get on with the focus of acting. The only other thing I could say is that by the end of a long day of filming it’s a relief to get the helmet off and be freed from the weight of the battery packs – and the sound of Velcro ripping on or off (there’s A LOT of Velcro used) is a sound that haunts me long after each film has wrapped!

I&T Today: What are some of your favorite parts about motion capture acting? Your least favorite?

Karin Konoval: Again: playing the role of Maurice is no different for me as an actor than any other role I’ve played. Just because my performance is being captured using this technology doesn’t make it a different kind of acting. What IS different from other roles I’ve played is, again, playing a mature male orangutan character – which has been both one of the most challenging and rewarding experiences of my career. Regarding “least favorite” stuff, I can only reflect on some of the tougher geographic locations and weather conditions we’ve filmed in on the POTAS. Snow, rain, sleet, broiling heat, big winds, up mountain sides, at the bottom of holes underground, hanging off ledges, etc etc – we’ve done it all. It calls for a lot of endurance, patience, and stamina. But: worth it!

I&T Today: Beginning with 2011’s Rise of the Planet of the Apes, the franchise has gained newfound popularity. Why do you believe the films resonate with modern audiences?

Karin Konoval: It’s a wonderful thing to ponder, isn’t it? I don’t know the answer to this, but perhaps a part of it is the opportunity to look at ourselves as a species through the eyes of our closest three relative species – chimpanzees, gorillas and orangutans. We do share over 97 percent DNA with each of them (it’s a slightly varying percentage with each too – could that be a part of it? To gain some particular sense of perspective and reflection on ourselves as humans? It would be wonderful to ask that question widely of devoted fans of the POTAS, and see what they say!

I&T Today: I read about the orangutan you studied for the role of Maurice. Could you tell me a little bit more about that experience? 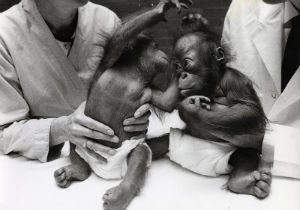 Towan (right) and his sister Chinta were the first twin orangutans born in a zoo. Photo courtesy of Woodland Park Zoo and Robert Kelley. Circa: 1968

Karin Konoval: Towan. His name translates as “Master” and he always will be that for me. One of the most amazing individuals I’ve ever met in my life. I first went to observe Towan where he lived at Woodland Park Zoo in 2010, and was fortunate to know him for the last six years of his life. He has been the heart and soul of my inspiration for Maurice. The journey of knowing Towan and what I learned from him could fill a book. In brief though: the first time I went to observe him he chose to come to the window and studied me closely. It was a profound experience, and grounded my portrayal of Maurice from then on. A year later after Rise opened I was invited for a personal introduction. I brought a gift of art supplies – like me, Towan was a painter – and had the opportunity to watch him paint. He chose all his colors, moved his canvas from here to there studying his work – the same focus and authority as any human artist. A few months later I returned with a canvas of my own and he watched while I painted. That was the beginning of a journey that continues. Not just 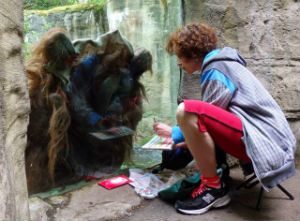 getting to know Towan and the rest of his orangutan family, but through two of his caregivers (Laura McComesky and Andy Antilla) I was introduced to the Orangutan SSP and the wider world of orangutan conservation. Orangutans are critically endangered in both Sumatra and Borneo (and for anyone who would like to know more their conservation, there’s an orangutan page with helpful links on my website). I’m now one of the “foster people” to six wonderfully individual orangutans in Sumatra, Borneo, and at the Center For Great Apes in Florida. It was Towan, his profound and compelling presence, that drew me into the world of orangutans in a way that has grown far beyond the world of the films and playing Maurice. Towan passed away the week after I wrapped on War for the Planet of the Apes. At 48, he was the oldest male in North America when he passed. I spent his last afternoon outside with him, painting for him at the window where we first met. As you can imagine, the loss of him to me and many others has been enormous. 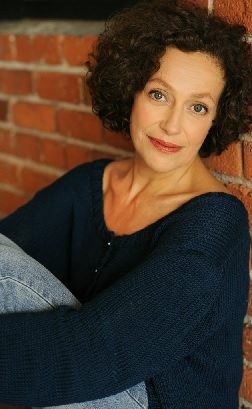 I&T Today: I saw that you also published a children’s book a few years ago. Is that something you’d like to continue to pursue?

Karin Konoval: Jeffrey Takes A Walk In December is my first published children’s book, and yes I believe there will be more. As an artist/writer, I’ve been creating stories in painting since 2006. All of my solo gallery exhibits are series of paintings that tell a story as you move round the room. I’ve had three gallery exhibits this past season – the artwork and story for “Jeffrey,” another story in paintings “tiny clown long wait,” and a series titled “Gore and Cordova” about a street corner. While I was previously published as a writer before beginning to paint, I’ve found that storytelling through painting and writing together is something I’m compelled to do. So, yes, there will be more books I hope!