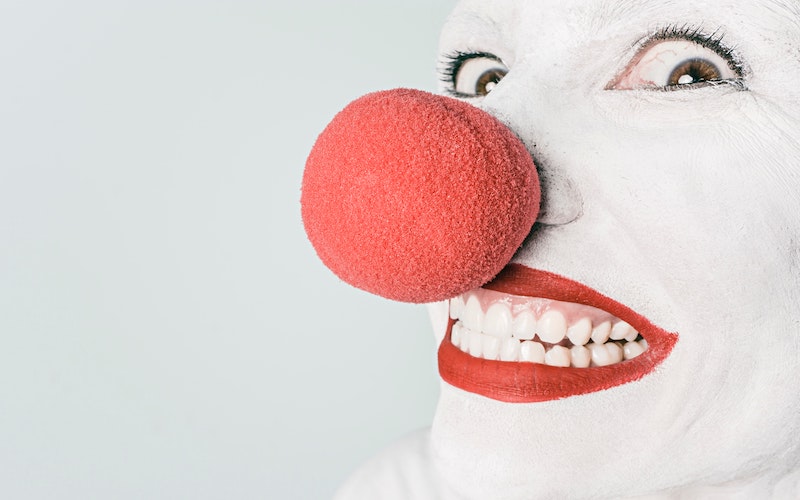 In this installation of Quick Bytes, we’re bringing you the strangest, latest tech and science news. Tell your coworkers around the proverbial water cooler. Impress your friends at parties. But first, you have to give this a read.

Clowns: Scientifically Proven to Be Scary

Getting any kind of shot can be nerve-racking, especially for children. Many doctors attempt to reduce this anxiety with a promise of candy after the immunization is done, something that still works for many of us into our adult years. However, in news that should surprise absolutely no one, it appears one factor is not very effective in improving the process: clowns.

A recent study published in the Annals of Physical and Rehabilitation Medicine looked to see if clowns were effective in reducing both fear and pain involved with receiving an injection. This was done by testing those factors during administration of the botulinum toxin injection, both with and without the use of “medical clowns,” which is apparently an actual term. Unsurprisingly, the clowns were ineffective at properly distracting the children from having metal stabbed into them. In a related story, clowns are also ineffective at making people laugh, not scaring people, and not ruining children’s birthday parties.

Tattoos for Your Health

Tattoos have become the modern way to express individualism by picking a picture from a book of images to be imprinted onto your body forever. Oftentimes, people prefer to have a certain meaning for their tattoos. Well, for anyone looking for some extra justification for that Sonic the Hedgehog tattoo on your lower back, there’s now a scientific rationale.

New research from the University of Alabama suggests that getting multiple tattoos can improve your overall immune system. The research even compares getting tattoos to working out, as both put stress on the body that can be strengthening. Going by this logic, that means that the buff guy at the gym with 96 percent of his body tattooed is the healthiest human on Earth.

However, because of the relatively small sample size of the study, there is still further research needed to conduct the correlation between getting ink and staying healthy. So, while it may seem like a good idea to get that dreamcatcher tattoo in order to cure your sniffles, you’re probably better off taking some DayQuil instead.

Bees Can Do Math

Bees are undoubtedly an important part of our ecosystem. And, in addition to pollinating flowers, producing honey, and stinging me in front of the entire class in third grade, bees also have another skill many of us humans lack: the ability to do basic math.

According to a study by RMIT University, bees have the capability to do basic addition and subtraction through memorizing colors, even allowing them to solve arithmetic problems. The bees were rewarded with sugar water for answering a correct question and presented a less tasty solution for a wrong answer, something that we should consider implementing into our own schools.

The fact that bees are capable of mathematics may have larger implications for tech as a whole, as the process can be applicable to rapid learning for artificial intelligence, something that would really be the bee’s knees for the technology. (Editor’s note: We’d like to apologize for the previous line and urge you to move on to the next story.)

Getting Sick on Purpose

You know when somebody sneezes into their hands and proceeds to initiate a handshake? Well, thanks to our society’s eagerness to be terrible with money, you can now have that very experience for a paltry $80.

Vaev, a Copenhagen-based startup, has debuted a specialized tissue that helps you “get sick on your own terms.” The tissue, which sells for $80 per sheet, is intended to train the immune system in the same way that a musician develops calluses. Why pay that much for the experience of getting ill when you could just lick a doorknob or eat at Papa John’s?

While it may seem like a strange idea, Vaev’s tissues appear to be popular, as they are sold out at the time of this writing. Additionally, the product could be a great inspiration for other business ventures, such as a fire extinguisher that sprays lighter fluid and a styrofoam bulletproof vest.

The Science Behind Comedy

Satire is one of the cornerstones of comedy. Whether you prefer The Onion, The Daily Show, or the much higher-quality writing of Quick Bytes, there’s a good chance that you enjoy a hearty laugh at a well-crafted joke. “But what’s the science behind this comedy?” you’ve probably never asked yourself.

During the AAAI Conference on Artificial Intelligence, researchers revealed how a simple shift of words makes a phrase more comical due to a structure they dub “false analogy.” This concept can be seen in satirical headlines such as “BP Ready To Resume Oil Spilling.” And, as we all know, learning the scientific reason behind what makes something funny makes it even more hilarious. This research could also mean that artificial intelligence itself could begin writing its own jokes, meaning that the hardworking writers of comedic quips could soon be out on the streets. Thanks a lot, science!

To the Heart, Through the Stomach

Dating apps have become a major part of our modern society. Popular applications such as Tinder, Bumble, and Hinge have revolutionized dating, turning the all-important quest for a personal companion into swiping endlessly after drinking heavily. However, while those apps tend to match users based on interests, Samsung’s new dating application looks to match users based on the contents of their fridge rather than the contents of their hearts.

Refrigerdating, an app offered on the Samsung Family Hub Refrigerator, allows you to match with others based on a photo of the inside of their fridge. The idea gives users great conversation starters for their first date, such as, “Why would a grown adult only have Sunny D and half a taquito in their fridge?” And, because it’s also available through web browsers, Refrigerdating looks to unite even more couples that will most likely lie about how they met.

With the massive growth of remote employment, Skype has unsurprisingly grown into a vital tool for offices to keep in touch. However, there are some unfortunate side effects to this, as societal pressures have forced humankind into a fascistic reign of cleanliness and organization, meaning you still need to keep your living space clean during these video calls. However, there is good news for you, my fellow loafers, as Skype has introduced a new feature that allows you to blur out the background and cover your shame.

This background-blurring feature, which is available on most laptops and desktops, utilizes AI that identifies human forms to focus in on people in a picture. This is undoubtedly great news for those of us who would like to continue being employed without the burdens of actually having to maintain a liveable abode. And, if this progress continues, we will hopefully have a feature in the future that allows us to blur out the entire screen so that we will also not need to put on clean clothes before an important video meeting.

Amazon’s Alexa has become a household name, acting as a smart hub for homes across the world. This is for good reason, as Alexa has an incredible amount of skills, from answering questions and controlling lighting to changing music and stealing personal data. However, the unprecedented number of applications for Alexa has been revealed to be an incredible 80,000. This is likely due to the 10,000 employees working on the voice assistant as well as the 100 million Alexa devices sold. Hopefully, this success means that Jeff Bezos can afford the Beluga caviar fountain he’s been planning to install in his office.

While the list of Alexa’s skills was listed as 70,000 as recently as December, that number has risen to the most recent 80,000 and will likely continue to grow. This is especially impressive as, while Alexa has learned 10,000 skills since December, most of us have simply broken our New Year’s resolution and succumbed to seasonal depression in that time.

Legos are best known for highlighting the department store toy section, starring in new animated films, and really hurting whenever you step on them. However, they’ve also gained a brand new use in the scientific community: something to swallow. Is it possible that medical science has simply gone too far?

A group of six physicians swallowed the small plastic toys to determine whether the toys can pass through the digestive system. A surprising amount of children end up ingesting inedible objects, which one participant admitted happens almost daily. While they did not reveal whether or not they taste better than Mega Bloks, the doctors did confirm that the Legos, to put it as delicately as possible, successfully made the journey through the digestive system. The experiment as a whole looks to quell the fears of concerned parents as, in most cases, anything non-toxic and dull will simply pass through the digestive system. Additionally, this experiment also explains the new sign on Legos boxes that reads, “Warning: Choking Hazard for Children and Professional Physicians.”