With Dan Kurzrock of ReGrained.

“Granola” has become a playful slur for environmentalists over the years. When you say, “He’s pretty granola,” you’re immediately summoning an image of hippie parody – the lanky arms, the tie-dye shirt, the sticky So-Cal accent; it’s the caricatured person a of “going green,” the guy you could easily imagine being chained to a tree somewhere.

But, despite being both a figurative and literal ambassador for “granola,” Dan Kurzrock comes off more like a Shark Tank contestant. He’s a fast-talker, his voice sharply nasal, enunciating everything without much hem & haw – even when he’s pitching his recycled beer cereal bars to hundreds of business leaders. 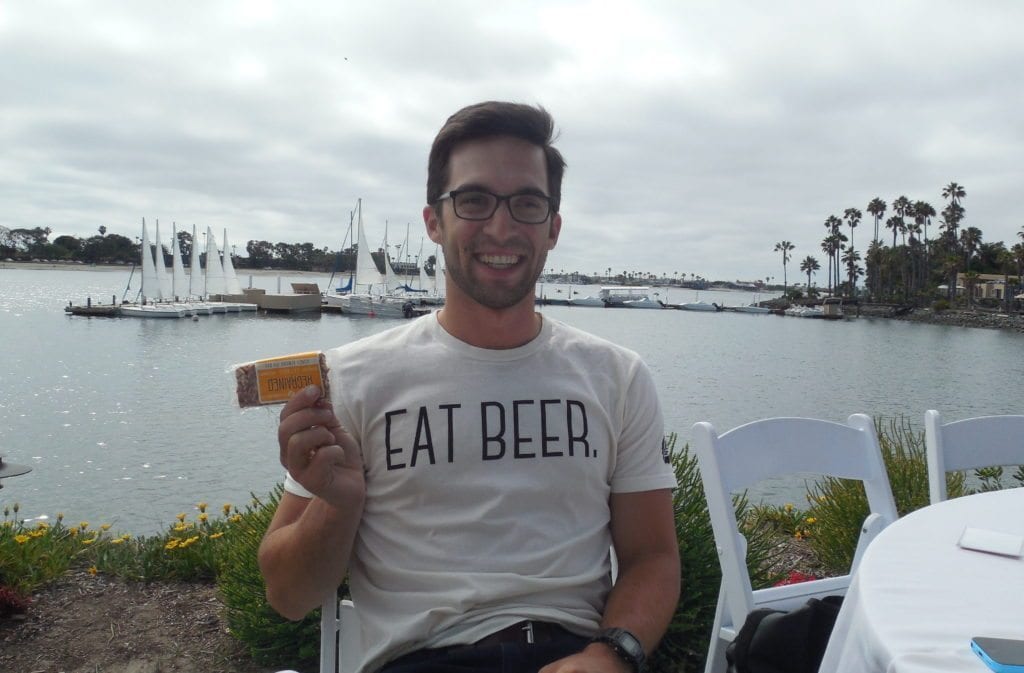 His argument’s compelling. Craft beer’s rise in popularity has resulted in a wildfire of urban microbreweries, whose waste, as Kurzrock proves, makes for some pretty decent grub. When a brewery is located in a more rural area, he explains, it’s pretty easy to find a place for all of those leftover grains (farms), but with urban breweries the logistics and costs are a bit trickier. Kurzrock encountered this predicament firsthand, and on a smaller scale:

So I was making beer. I started brewing when I was a 19 year-old in college. I loved that I could make beer myself and buy the ingredients. And it tasted good. You know, it was just a great hobby. And then as I got more into the hobby, I started brewing in a certain way. It was called all-grain brewing, which is like a mini-version of what commercial breweries do. At that point I was making five gallons of beer at a time, so not a lot of beer. That’s like a third of a keg. And I would use 15-30lbs of grain, just to make that volume of beer. It was like I was making a cafeteria-sized batch of oatmeal, and I didn’t even have a compost bin. I was a student at UCLA. We had a dumpster. I mean, the stuff smelled good, tasted good. My inspiration was trying to do something with it.

This led to his sustainability-themed business ReGrained. Its tagline, “Eat Beer” is emblazoned on his shirt as I talk to him during one of the breakout sessions at last year’s Sustainable Brands Conference in San Diego. He hands me one of the bars, the Honey Almond IPA, and I take a bite. It’s nutty and sweet. Despite being made from beer waste, it tastes like a regular breakfast granola bar, a good one too.

Obviously, we’re very provocative with our marketing, with the whole beer thing. We want people to pick it up. Hence the giant eat beer logo on the T-Shirts. But we’re making food. We want people to really want to eat it. If someone were to hand that bar to you on a ski lift chair, we’d want you to go, “Wow, what is that?” And then get even more pumped up when you learn what it is.