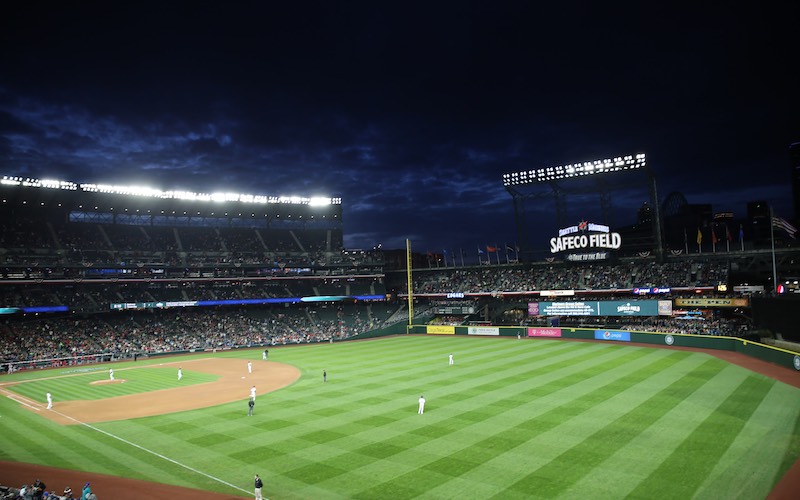 PlanLED is on a Mission to Make Stadium Lighting More Sustainable

In an effort to be more sustainable, the Seattle Mariners partnered with PlanLED to install LED lights in their home stadium.

With 150 years of history in the United States, baseball still looks and plays very similar to how it did when it first originated. With that kind of consistency, it may be surprising for such a traditional game to be a driver for change in the modern era. Enter the Seattle Mariners in 2015. That year, T-Mobile Park (formerly known as Safeco Field), where the Mariners play, became the first Major League Baseball park to install LED field lights. Working with PlanLED, who has since worked with a variety of other fields and stadiums, T-Mobile Park pioneered a new era of energy efficiency in sports.

The decision was based on two main principles: improved sustainability and visual experience. However, it wasn’t a decision made without risks. “There was some hesitancy,” said Mariners’ Senior Director of Construction & Planning Ryan van Maarth. “I think everybody wanted to switch to LED field lights, but no club wanted to be the first ones to do it in fear of messing up or making a mistake or compromising the play on the field. We stepped out on a ledge; we took a very objective approach to it. We had contingency plans in place, executed it, and we were the first in baseball. And since then, several others are following.” And following they are.

The New York Yankees are among those that have also installed LED lights. Outside of the MLB, the Portland Trailblazers and the Denver Nuggets both collaborated with PlanLED to install LED lights in their arenas as well. This is clearly the direction sports stadiums are heading. “MLB is going that way, and we’re not the only company out there doing it,” explained Gary Chittum, VP of marketing at PlanLED. “There are a lot of sports companies out there and they’re doing almost every stadium. I would expect Major League Baseball, within the next five years, to be completely LED.”

The benefits of this shift have been clear, at least in the case of T-Mobile Park, on the tiers of visual experience and sustainability.

LED lights have the ability to bring a much more natural lighting to the field, which enhances the experience of a night game for both the players and fans alike. “We went from our old system that had 3,700 Kelvin on the color temperature range to over 5,000,” van Maarth explained. “The color rendering index went from 60 to 80. So what that means is that the light that we have here in the ballpark is a better representation of more true natural daylight.”

As any baseball fan knows, the game is one of superstition, where oftentimes players don’t like anything messing with their “mojo.” That was part of the concern with the initial idea to install LED lights. Would it adversely affect the player experience? Would players blame low batting averages on the lights? Would outfielders lose pop flies? However, so far the feedback has been positive. Chittim actually had the opportunity to speak directly with Mariners right fielder Nelson Cruz about the new lights. “He was saying that for the first time in his career he could pick up the spin of the ball in a night game. In the daylight, he could always see the spin on the ball … We’ve tried to get as close to daylight as we can. The uniformity and the levels in here are as close as you can get.” Van Maarth confirmed: “All the player feedback we got from the new system is great … They feel like they can see the ball better. They feel like they just have a better opportunity to play more naturally.”

The fan experience, too, is enhanced. Not only can fans also see better with the new lights, the stadium can add different elements for different events. “There are event mode settings now,” van Maarth said. “Our lights are automatic on, automatic off. We can individually address them. They can flash and flicker with different events. When we win, the lights flicker and everybody celebrates – it’s great.”

While player and fan experience is important, the sustainability benefits of LED lights is really where they shine. When T-Mobile Park switched from metal halide lights to LED, the facility saved 60 percent energy consumption on gas use alone. Additionally, while the old lights only lasted a few years and ended up in landfills, LED lights are the opposite, lasting years at a time and being completely recyclable.

“Almost everything is recyclable,” Chittim explained. “This is not gas in glass; this is not mercury that they’re pulling out that you have to treat and take to a landfill. And that’s what they had to do with the old lights that they had here … With the limited use that they have here, these lights will be the last set of lights ever bought; this will last as long as the stadium.”

The sustainability efforts of the Mariners landed them the Green Glove Award in 2017, dethroning the San Francisco Giants after a nine-year reign. As Mariners Senior Vice President of Ballpark Operations Trevor Gooby told MLB.com, “We have worked hard over the years to make T-Mobile Park one of the ‘greenest’ ballparks in pro sports.”

Along with their efforts to reduce waste via recycling and their “urban garden” which provides fresh vegetables and fruits to concessions, the MLB also cited T-Mobile Park’s energy-efficient LED lights as a reason why the organization received the award.

T-Mobile Park is a shining example of the many benefits of LED lighting, even in energy-intensive facilities such as arenas. With multiple organizations across multiple sports leagues adopting more energy-efficient practices that not only enhance player and fan experience but also help save money and energy, the future for LED lights in stadiums is bright.