Geneva, Switzerland – Throughout his childhood in Nyon, Vaud, Switzerland, Mike Barry Ehouman had one all-consuming hobby and one professional goal. Raised a devout Christian, Barry aspired to become a pastor.

His hobby, by contrast, was mechanical, not spiritual. He enjoyed breaking down and reassembling mechanical watches. Growing up in a neighborhood of watchmakers, not far from the Geneva headquarters of Rolex, an industry icon, Barry amassed a vast collection of watches, from Armani to Zenith, to feed his obsession.

Barry’s mother encouraged him to pursue both his passions. “My mom, Marin, was very forgiving,” said Barry. “When she caught me disassembling one of her Rolex watches, she wouldn’t punish me because she knew I could put it back together, sometimes I even improved its performance.”

After serving as a youth pastor of Bonne Nouvelle, a charismatic church that allowed him to preach in parishes throughout the world, including Africa, Rome, and the U.S., Barry returned to his hometown where he launched his digital product design company, Mikevision Technologies, in 2013. The 44 year-old CEO’s first product, naturally, would be a watch, but unlike any of the luxury, mechanical watches that fascinated him as a child and raised Switzerland’s profile worldwide. He designed an internet-connected digital watch that would be loaded with more computerized and multimedia features than any smartphone on the market. He named it the Sandfox Smartwatch.

Loaded with artificial intelligence, two cameras, a hard drive, a phone and much more, the Sandfox impressed attendees and journalists during its recent launch at the 2017 Consumer Electronics Show (CES) held in Las Vegas, NV. The watch was so impressive, in fact, that Mikevision received the Editor’s Choice Award from Innovation & Tech Today Magazine. 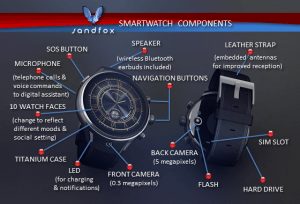 “We’re promoting the Sandfox as much more than a smartwatch,” said Barry. “It’s a computer and multimedia communications tool on your wrist-with so many features Dick Tracy would be proud to wear it!” Hoping to compete with Apple’s Siri, Cortana, and Google NOW, the Sandfox contains digital assistant technology enhanced with artificial intelligence (AI). The technology will learn from voice-activated commands on how to become more “human”, making the Sandfox the smartest of all smartwatches.

Other cool features include a radio, blue-tooth stereo output (two blue-tooth earbuds are included), GPS, Wi-Fi, an SOS button, ten alternate watch faces (allowing you to change the look of your watch depending on your mood), and a tiny pocket-size pico projector, allowing watch owners to project a PowerPoint presentation or movie directly from the watch onto a nearby wall.

Priced at $850, the Sandfox enters the market just as Swiss watch industry experts predict a high-end,smartwatch boom, a growing consumer demand for high-end, Swiss-made versions of the technology.

“If it is true that Apple has sold where we should move around 20 million Apple Watches (average retail price – $350) and has a market share of around 50 percent, then the potential is enormous,” said Jean-Claude Biver, head of LVMH watch brands including TAG Heuer, Hublot and Zenith.

While the mechanical watch industry struggles (exports of Swiss-made watches have fallen for 15 consecutive months), the Mikevision team continues to add more features to the Sandfox (a waterproof version is in development). Their plan – promote the Sandfox as the Swiss-made luxury watch of the future that happens to be digital.

Despite his busy schedule, Mike Barry occasionally finds time to revisit his childhood hobby of breaking down and rebuilding mechanical watches “just for fun”. But the former pastor says he’s having more fun growing his company and adding more features to a watch he hopes will one day add to the luster of Switzerland as the world’s leading provider of luxury timepieces, both mechanical and digital.