From his Oscar-winning special effects work in What Dreams May Come to his invention of “bullet time” in The Matrix franchise, John Gaeta has been at the forefront of technology his entire career. While working on natural and human interfaces at Float, he helped Microsoft future media labs develop Kinect and HoloLens. He then moved to Lucasfilm to help Disney relaunch the Star Wars franchise, and then founded the Lucasfilm and Industrial Light & Magic immersive entertainment division, ILMxLAB. Today, Gaeta serves as senior vice president of creative strategy at Magic Leap, the company that’s pushing mixed reality with its $2,300 Magic Leap One: Creator Edition goggles.

Based in Plantation, Florida, the startup has raised over $2.3 billion from tech giants like Google and Alibaba with the goal of bringing light field technology to the mainstream. The mixed reality goggles project a digital light field into the user’s eyes to blend 3D computer-generated imagery with the real world across a variety of apps.

Gaeta explained that Magic Leap has been built atop the foundation of video games, which have been forging interactive stories for decades.

“We stand on top of that, but it’s still quite different because inside the video game is a world of your creation,” Gaeta said. “Mixed reality incorporates the real world, which is unpredictable. There’s emergent gameplay in some of the new video games with experimentation where characters can learn and have forms of awareness that we haven’t seen before, but now if you’re in the real world, walking out on the streets, who knows what will happen with cars and people. So a new special computing mechanism has to be put in place in order to understand what’s happening out there.” 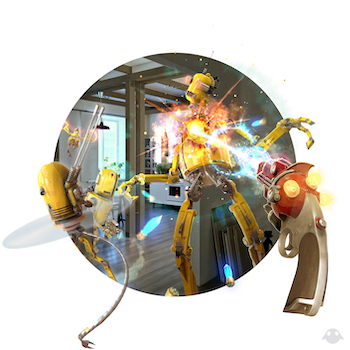 In Weta Workshops’ new Magic Leap game, Dr. Grordbort’s Invaders, the real-world room you’re playing in has its walls ripped open by robots of all sizes. This shooter offers plenty of special weapons to rip limbs from robots or melt them into oblivion, as wave after wave of cartoonish 3D-animated invaders attempt to rule the world.

This first-generation example of mixed reality gaming will get turbocharged in 2019 and beyond as the big wireless carriers launch 5G.

“With 5G you have really high-fidelity capabilities, allowing people to travel around the world without ever leaving their home,” Gaeta added. “With co-presence, you suddenly have changed the nature of communities because people can be in different places at once. VR is very isolating. Magic Leap allows families or friends to play together from anywhere and be volumetrically present together. There still will be online and VR games for exploring game worlds in a virtual fantasy universe, but mixed reality and facial computing will change the way developers think about universes that can couple with the real world, or make sense logic-wise with the real world. As it becomes possible to house and serve persistent, adaptive content in the real world, there’s a whole evolution of that type of game and content that’s coming.”

Magic Leap already has games like Angry Birds: First Person Slingshot, Luna Moondust Garden, and Seedling available, even though this early version is really for game developers and enterprise. Over time, as the price point drops, more developers will have different interactive experiences available that fuse the real and CGI worlds.