The Finch That Lost Its Way … And Started Its Own Species

Lost at sea for he couldn’t remember how long, our protagonist found refuge on the island of Daphne Major amongst the Galapagos island chain. It was the late 1970s and he had traveled nearly 100 kilometers to his destination. Without the ability to get home, he didn’t despair, rather, he assimilated with the locals. In only three generations, a new species was born. 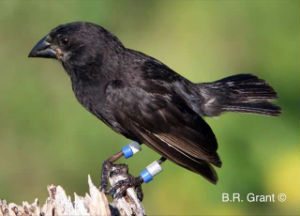 This is the story of the G. conirostris male finch, the subject of a 36-year study. In 1981, a group of researchers on the tiny volcanic island Daphne Major noticed a strange bird that looked different than the others typically found in the area. Not only was it sized and built differently than the other birds, it sounded different as well. A quick test of the bird’s blood revealed something shocking.

Prior to this discovery, it was widely accepted that it would take over hundreds of generations to establish a new species through reproductive isolation. On the island of Daphne Major, however, a new species came to fruition in just two generations. Lost on this new island, our protagonist was able to mate among the native finch species, resulting in hybridized offspring. These new and unnamed birds were simply called “Big Bird,” because, well, they were bigger than the other native birds. After reaching maturity, the Big Birds were heartbroken when they struggled to attract mates. Due to their hybrid nature, they were unable to replicate the native bird songs. This, along with their size difference, made it difficult to attract the native finches. However, they were able to attract each other, and this interbreeding resulted in even more Big Birds on the island. After six generations of observation by researchers, the Big Birds are now their own established species consisting of approximately 30 individuals. 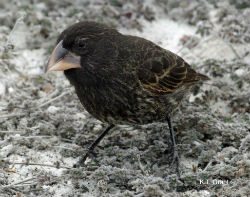 One of the critical requirements for speciation to occur is that the new lineage must be ecologically competitive, being able to compete with other species for food and other resources. And, over the years, Big Bird was able to prove its competitiveness. In fact, Big Bird was able to become its own species in just two generations. According to the authors of the study, it is likely that new lineages have developed many times during the evolution of Darwin’s finches. Many of them have gone extinct, while others led to the species that reside amongst the Galapagos today. While researchers are unsure about the long-term survival of the Big Birds, there is potential for success in longevity. It’s safe to say that Darwin’s finches aren’t done puzzling and exciting researchers. As Leif Andersson, professor at Uppsala University put it, “Charles Darwin would have been excited to read this paper.”

Featured Image: The breeding of two distinct parent species gave rise to a new lineage (termed “Big Bird” by the researchers). This lineage has been determined to be a new species. This image is of a member of the Big Bird lineage.

All Images Are Credited to and Copyright by  B. R. Grant

The Finch That Lost Its Way … And Started Its Own Species