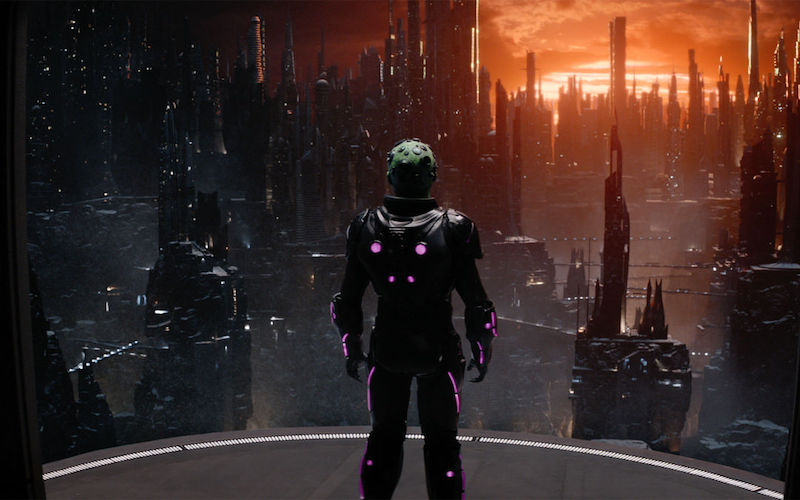 While there are thousands upon thousands of DC comic books featuring Superman, the backstory of the Man of Steel remains untapped territory. So while Superman (also known by his birthname Kal-El) continues to fight for truth, justice, and the American way in Warner Bros.’ Justice League and standalone movies, the stories of his grandparents and the elders of his now-destroyed home planet are explored in the Syfy TV show Krypton.

The show, which debuted on March 21, 2018, was created by David S. Goyer, who has experience with both the DC and Marvel universes, having written the Blade movie trilogy, Christopher Nolan’s Dark Knight trilogy, and Man of Steel as well as its sequel Batman v Superman: Dawn of Justice.

Krypton follows Kal-El’s grandfather Seg-El (played by Cameron Cuffe). The House of El is in turmoil, which serves as the dramatic backdrop for the guilds on the alien planet that are vying for power. There’s also another popular lineage from the mythology, the House of Zod. And connecting this backstory directly to Superman, there’s Adam Strange (played by Shaun Sipos), a human time traveler who tells Seg-El about the imminent threat of Brainiac trying to prevent the birth of his future grandson, Kal-El.

Cameron Welsh, an executive producer and writer on the series, has been given the freedom to chart new territory in one of the most recognizable superhero backstories. He was at San Diego Comic Con along with key cast members to talk about the show, which has a second season debuting in 2019.

“This job is a dream come true for me because I’m a huge Superman fan,” Welsh explained. “He’s always been my favorite character. I never in my wildest dreams could have expected to have this opportunity. To work on this show is a huge responsibility and I feel very honored to do it.”

Welsh acknowledges that there were 80 years of Superman before this series was born: “To have an opportunity to add my little piece to that mythology is amazing, but I also feel the weight of that responsibility and I take it seriously.” Because Krypton is set 200 years before the birth of Kal-El, Welsh had a pretty blank slate to mine.

“With our show, we’re in the best of both worlds, where we have this divergent timeline, so we have a lot of freedom there,” Welsh added. “We can go anywhere we like, but we also have all of that 80 years worth of mythology to cherry pick from and take the bits that we need and that we want to use, but also put our own spin on it.”

Sipos is also a believer in the power of comic book mythology. “It helps to guide our lives and helps make sense of what we do here on Earth,” Sipos said. “People may look at comics and think it’s nicely colored artwork and it’s just stories, but really, they’re very powerful and they’re very rooted in mythology.”

Sipos believes the story of Superman has stood the test of time because he helps people simply because it’s the right thing to do. “He’s been put up as a shining example of what mankind can be even though he’s not a human – he’s a Kryptonian,” Sipos explained. “Plus he can fly, and every kid, and everybody, wants to fly.”

Fans got a glimpse of Krypton in Man of Steel, but this show delves much further back into
the timeline. That allowed the set creators to bring a bustling Krypton to life on a Belfast, Ireland soundstage, which helped the actors
get into character.

“The sets are magical because the world is around us and we’re stepping into that world,
so our imaginations are immediately triggered,” said Ann Ogbomo, who plays Jayna-Zod, an original character created for this series. “I love the Rankless district. Jayna-Zod is meant to hate that district, but as an actor I just love being in there because the finest details down to little items on the floor are all deliberately placed.”

As the first-ever female General Zod, Ogbomo’s Jayna-Zod is tasked with defending Krypton at all costs, making sure all of those details in the city remain intact.

“This show is an opportunity to explore a character who is responsible for protecting an entire city,” Ogbomo added.

When she first got the part, she wanted to find out as much as she could about this original character in as much depth as possible, so she can bring that to the show, as well as to the larger comic book mythology. She also has been able to traverse two DC universes, having starred in the Wonder Woman and Justice League movies as Philippus.

“Krypton’s been great because it’s my own creation and the writers’ creation, so it’s actually easier than having something that is set or a character that everyone knows,” Ogbomo said. “This new mythology is good because it means we can do whatever we like.”