IRONMAN Triathlon Hall of Famer Julie Moss thrives and depends greatly on the sports technology of our times. She benefits from forty years of training knowledge – and the most memorable moment in triathlon history, viewed by millions on ABC’s legendary anthology Wide World of Sports.

She is one of very few 60-year-old world-class elite athletes on the planet. Certainly, she is one of the fittest sexagenarians alive. As Moss prepares for October’s IRONMAN World Championship in Kona, Hawaii, she again has the triathlon world abuzz. Can she beat her previous time of 11 hours, 10 minutes, and nine seconds for 140.6 miles of swimming, cycling, and running? Moss previously accomplished these awe-inspiring numbers in 1982 when she crawled across the finish line, making the sport – and herself – a global sensation overnight.

You read that right. At 60, Moss can match her time the day she became the most recognizable athlete in triathlon history. If this sounds far fetched, Moss matched it at the IRONMAN New Zealand in March – after beating it by 30 minutes in the April 2017 IRONMAN North American Championship.

“All of that would be really nice,” the vivacious Moss says with a smile, “but this year, I just want to run a really good race. I’ve had such a love-hate with that course, and I just want to be solid. This is my love letter to Kona, the race I’m running for everyone who’s supported me or come out to watch the last 36 years.”

It’s an auspicious time for Moss. Her long-awaited memoir, Crawl of Fame, releases worldwide on October 2, just 11 days before she starts her 140.6-mile IRONMAN day. Movie talks are also underway, helmed by long-time 60 Minutes correspondent Armen Keteyian, whose 1982 story on Moss netted him the Sporting News Sports Feature of the Year.

How does a 60-year-old woman swim, bike, and run as fast as she did at 23? How is that possible? Besides her devout training, Moss cites changes in workout regimens and technology. In 1982, she used her own bike, a borrowed t-shirt and running shorts, a trucker’s cap, and basic running shoes. Her “kit” and equipment cost a few hundred dollars, no more. Today, her gear includes a state-of-the-art Performance bike worth thousands of dollars (computerized models can run upwards of $20,000), top-of-the-line Hoka One One shoes and apparel, and similarly advanced products from her other sponsors.

“I give a lot of credit to the technology,” she says. “It is so much further along. We can measure everything about our workouts, fitness, exertion, heart rates – everything. We can calibrate our workouts so precisely, and the equipment – and shoes – are so light and tough and tailored to what we need, giving us advantages we never had when I was a young professional.”

In Kona, Moss will focus on her own race – but it won’t be easy. Also on the line will be her son, Mats Allen, making his professional debut. Mats’ father, Mark Allen, won a record-tying six IRONMAN World Championships from 1989-95. Mats is the progeny of two iconic superstars.

“I’m looking forward to coming across the line and seeing my son cheering for me,” Moss said. “For myself, I want to finish knowing that I did everything I could, and I gave the race everything I have. If I hit the time, that’s a bonus.” 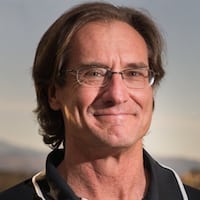