Bugging Out: How Insects are Hopping into the American Diet

“Yet these you may eat among all the winged insects which walk on all fours: those which have above their feet jointed legs with which to jump on the earth. These of them you may eat…” Leviticus 11: 22-24

CEO Rose Wang can’t help but grin as a scrum forms around her. It’s about 4 p.m., and the audience members who have lingered after the presentation are hungry – curious, too, as they snag some of the brightly colored chips from the bags on the table. They look like Doritos, and, as I try one myself, the taste isn’t too different, despite the key ingredients being worlds apart. The packaging is full of primaries – reds and yellows, a heavily stylized font. It has all the trappings of your standard supermarket snack brand. Chirps, the label reads.

Wang’s is one of many companies exhibiting at the Sustainable Brands conference. Held in Detroit this year, the annual expo of green products boasts partnerships with a plethora of major corporations: Amazon, Target, Nestle, Proctor & Gamble, to name just a few. However, there’s also room for startups like Chirps to show off their wares, turning the conference into an acid test of trials, errors, and, ideally, trends.

One of this year’s biggest buzzwords isn’t easy to say – nor, for some, to swallow. “Entomophagy,” or the human consumption of bugs, is starting to get some attention, especially in these circles, as livestock agriculture is viewed, more and more, as one of sustainability’s worst offenders.

Last year, for instance, the journal Science published a study claiming that rises in total methane emissions since 2006 were likely attributable to agriculture, even more than the fossil fuel industry. There are about 1.5 billion cattle in the world, after all, and the average cow emits 30 to 50 gallons of methane per day. And, when compared to CO2, methane is by far more virulent to the environment. For example, according to the U.N.’s Intergovernmental Panel on Climate Change, methane’s increased heat-trapping properties mean that it warms the planet 86 times as much as CO2.

Combine numbers like these with the resources it takes to breed, feed, and slaughter the livestock needed to satisfy growing billions and you have a system whose projections are so bad they’re driving the West toward a foodsource not usually seen outside of a playground dare.

“It takes approximately 2,000 gallons of water to make a pound of beef compared to one for a pound of crickets,” Wang tells me.

I take a seat next to the young bug food CEO. She’s lively, eloquent, the kind of person who’s good on camera. Earlier this year in fact, Wang appeared on ABC’s Shark Tank with her co-founder, the latter bursting out of a paper sign in a cartoonish cricket costume. As a contestant, they were among the show’s oddities and longshots – joining the ranks of Bluetooth surgical implants, anti-flatulence underwear, and bacon-cooking alarm clocks. To be clear, it’s hard to imagine prime time corporate titans like Robert Herjavec, Barbara Corcoran, and Mark Cuban putting up for a company whose grand enterprise is convincing Americans to gobble insects by the pound.

However, after grilling the contestants for several minutes and sampling one of the chips, the most well-known Shark, Cuban, looking over the bags and at one of the founders in her cricket costume, committed to an investment of $100,000.

There have been several studies indicating that Cuban’s reception could be typical of other Westerners exposed to this unorthodox diet. For instance, researchers examining Australian and Dutch responses in 2014 concluded that, with proper education (and by tasting the food itself), consumers could become more comfortable with the practice. And, as I watch people sampling Wang’s Chirps at the conference, I can see a similar response. People seem pleasantly surprised by the texture and flavor and several remark that they might eat bugs again if they have the chance.

Cuban’s $100,000 investment wasn’t an anomaly either. Fellow entomophagy company Chapul also received $50,000 from Cuban in 2012. And, last year, bug protein bar company Exo was able to raise a whopping $4 million from various investors after a series of funding rounds. Numerous other startups are joining in too, all vying for early dominance in an industry that has the potential to change the American foodscape. Already, there are niches and offshoots forming, like Bug Muscle (a cricket-based bodybuilding supplement) and Anty Gin (a gin distilled from ants).

Indeed, though bizarre to the uninitiated, bug food is big business – with the potential to become bigger business if entomophagy becomes more mainstream for American and European consumers. Bugs are already a part of the regular diet for approximately two billion people worldwide. And the promise of a new cheap and sustainable protein source is a huge enticement. “Portable protein is a $55 billion market across snack bars, protein powder, and protein ingredients,” according to Exo investor Lauren Jupiter in a piece for Wired. “This total global market expands to $371 billion when considering the applications for crickets and cricket ingredients in pet food, nutraceuticals, livestock feed, and other industrial uses.”

And, as a mass protein source, bugs are especially viable. Gram for gram, insects like crickets and caterpillars contain more protein than chicken and steak. They’re also packed with important micronutrients like copper, iron, and magnesium, according to the Food and Agriculture Organization. Finally, and perhaps most obviously, farming crickets doesn’t require nearly the amount of space of farming cattle or pigs. As many have pointed out, with so much farmland at or over capacity, and with food scarcity becoming more of a problem, it seems downright foolish to ignore a major food source when the only real objection is “bugs are icky.”

However, the challenge of marketing the Timon and Pumbah diet to Americans shouldn’t be taken lightly. Although the rest of the world (and human beings in general) have been eating insects for thousands of years, the practice is revolting to most Western consumers. There are just a few exceptions, including escargot and Casu Marzu cheese, a delicacy containing larvae, which also happens to cost $100/pound.

It goes without saying though that diet is often just matter of taste, and tastes change. Right now, the lobster, commonly referred to as a sea bug, is the paragon of cuisine – something you can expect to tack on an extra $5-$10 for if it’s added to your ravioli. But, according to Linda Greenlaw’s book The Lobster Chronicles, in the 1800s lobster was so reviled that it was considered to be cruel and unusual punishment to feed it to American prisoners more than once a week. 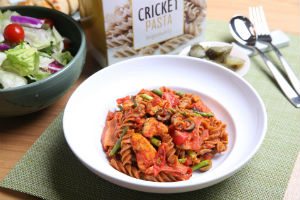 Advocates for Americans adopting the bug diet have been around for decades, but it’s only now that they’re message is beginning to catch on. And, as discussed earlier, the sheer amount of money being poured into the industry means that marketing initiatives are sure to follow. Though the conversation is still fairly academic at this point, with billions in backing, it may be only a matter of time before we see the first bug-infused fruit roll-ups appearing in a commercial on Nickelodeon.

Furthermore, many ento-companies, aware of the inherent aversion to their product, are taking extra steps to appeal to the Western palate – emphasizing pleasing textures and de-emphasizing the presence of insects in the food. “The insect is hidden…Just knowing that there’s an insect in a chip is the first step, and that’s enough,” says Chirps’ CEO Rose Wang.

Ironically though, as American culture begins to dip its toes into the bug diet, the opposite is happening elsewhere, as cultures in Africa and Asia become more familiar with Western norms, marginalizing indigenous entomophagy practices. “I want to point out that it’s really important for us to start in America, because we’re the leaders of livestock consumption,” Wang continues. “China is going to beat us soon because they have so many people…And so this is where we need to start the consumption change, because that’s where it’s going – to a lot of the rest of the world.” By this point, it’s way past time for dinner. Shaking hands with Wang, I leave the conference room and head for the mobbed buffet line. Tonight, it’s chicken. And I’m finding it hard not to be a little skeptical of what I’ve heard this evening.

Eventually, I make my way to the plenary room where all the big presentations are. This is the stage where the major industry players regularly make their appearances. Last night, it was Hamdi Ulukaya, CEO for the popular yogurt brand Chobani.

Tonight marks the event’s Innovation Open, a kind of startup challenge where one new company is awarded free consultation from executives at Whirlpool and the Ford Motor Company. This year the winner is local: Michigan’s own Detroit Ento, which has set up a 3,000-square-foot production space in the city where it prepares crickets – what some have dubbed “the gateway bug” – for human consumption.