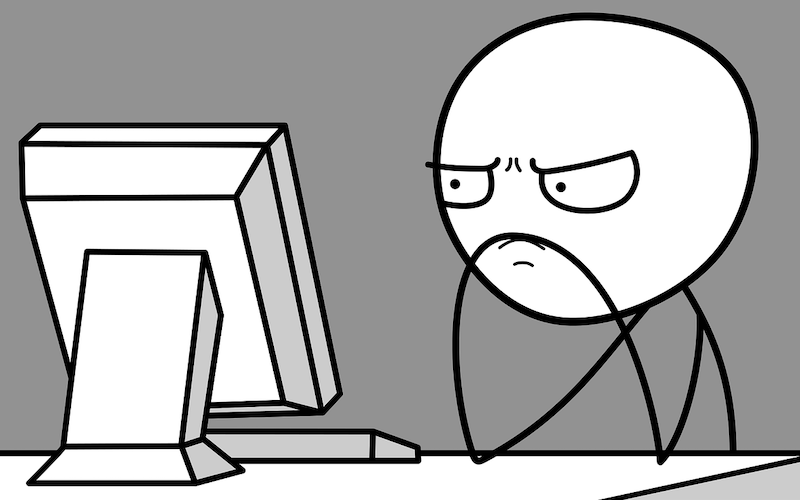 Image by OpenClipart-Vectors from Pixabay

We all know the great impact that technology has made on our everyday lives. Being 33 years old, I’ve seen a lot of these changes happen in my lifetime. My favorite of which being when tech brought entertainment to pooping. It’s my favorite! I love it so much I’ll just sit on the toilet with my laptop and/or cell phone ‘til my legs are sore. I’m only actually pooping for the first 5-10 minutes, but I’m having so much fun that I choose to continue sitting there. It’s the highlight of my workday! Hashtag praise up! But as great as technology is, it’s been a very bumpy road to learn how to use it properly.

I learned real quick not to f*** with technology when I played Oregon Trail for the first time in 2nd grade. Computer Lab was a new class where we would learn how to use computers, mostly by playing games. It was f*****g awesome. At least that’s what I said when I was in 2nd grade. I eagerly started my game, named my characters after myself and my family, then hit the trail. It was a blast for about five minutes. Then I watched as my family members died one by one. There I was, a seven-year-old, watching myself die from dysentery. Instead of leaving excited about computers, I left wondering what the meaning of life is. Just a seven-year-old nihilist wandering the halls in his Batman backpack. I cut back on the Oregon Trail after that. It was too heavy.

When I was in high school, technology turned into an escape. I would sit in my basement all day playing Xbox on a s****y TV we had. It was f*****g awesome. At least that’s what I said when I was in second grade. Unless they were doing laundry, my parents would leave us alone if we were down there. They were just happy that we weren’t out smoking weed yet (we were). Because they left us alone down there, I knew I could use it for cover. One day I told my parents I was going to play Xbox in the basement, but I had other plans. I wanted to explore my body.

We didn’t have anything with nudity down there, so I just watched MTV because there was some chick in a bikini on. That was more than enough for a curious 15-year-old boy. I was so into it that I didn’t hear someone coming down the stairs. Then, all of the sudden, my dad pops in. There we were, staring at each other in silence, only one of us with pants on. He broke the silence. “You want Chipotle?” “No,” I replied. He went back upstairs and I wanted my 15-year-old life to end. The truth is, I did want Chipotle. I was starving. But I didn’t deserve Chipotle. At least that’s how I felt. I never used my Xbox for cover again. It was just too risky.

Being 33 now, you’d think I’d know better how to deal with technology, but I continue to let it get me. Just this year, I saw a joke on Facebook that made me wonder if sexy Harry Potter fanfiction was a real thing and, unfortunately for me, it is. I looked it up on my work computer and had to go do something else, but I left the web browser open. While I was gone, a coworker saw it and showed it to people. Nobody said anything for months. Finally, one of them said that they saw it, and now when anybody asks me about it, it just sounds like I’m scrambling to make up a bad lie so they don’t think I’m into it. Even now, writing this, it’s like, “Why are you even bringing it up? If it bothers you that much, it’s probably true.” FOR THE LAST TIME, I’M NOT INTO HARRY POTTER EROTIC FANFICTION AND MY SCREEN NAME ISN’T HarrysBigCrookedWand420!

As technology continues to develop, I know I’m going to keep making these dumb, embarrassing mistakes that have plagued me from the beginning. It’s just my nature. I’m sure I’ll be getting caught with my pants down by the robot overlords in no time.

My legs are getting sore, so I’m going to get off the toilet. Thanks for reading.