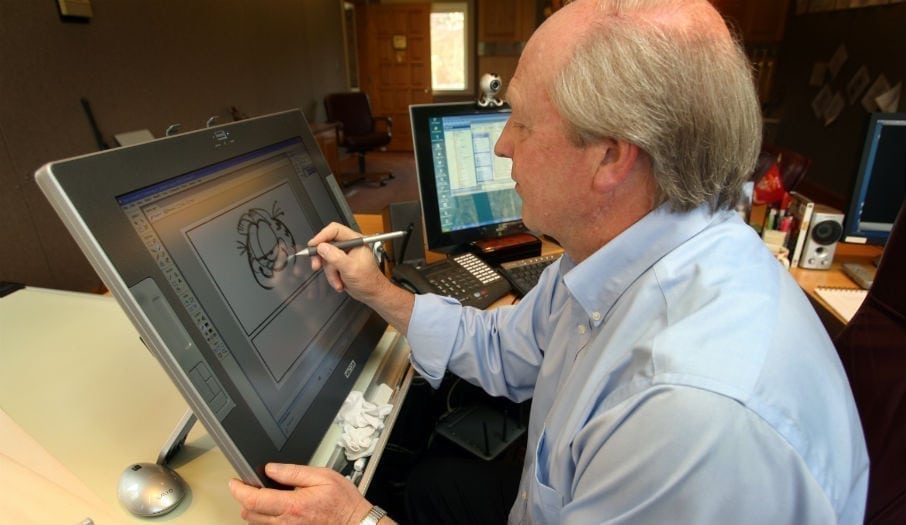 Garfield Creator Jim Davis on How He Got into Creating Comics

One of the most recognizable characters in popular culture, Garfield has been a staple of the world of comics for decades, running daily for over forty years. Outside of a popular comics series, Garfield has been adapted to a number of animated series, holiday specials, live action films, and even video games. We had the opportunity to speak with Garfield creator Jim Davis for our summer issue as part of our special feature on comic book creators. In this exclusive interview, Davis opened up about how he first got into making comics, how the industry has changed throughout the years, and how he imagines his long-running comic will end.

Jim Davis: I started playing around with drawing when I was a kid. I was asthmatic as a child and we lived on a farm, so consequently, I spent a lot of time in bed. My mom used to shove a pencil and a pad of paper in my hands and tell me to “keep busy.” The drawings were so bad at first, I had to label them. But I got better in time and did some cartoon illustrations in my high school yearbook. In college, I majored in art and business (I took the business classes to appease my parents), and shortly after college, I got a job in advertising. Then I heard about a cartoonist in my hometown who needed an assistant. I went to work for T.K. Ryan (Tumbleweeds) and from that point on, making a comic strip was imprinted on my DNA.

Jim Davis: I work with a few assistants and also my son James on coming up with the storyline for the strip. Sometimes we do an entire week with a theme, but mostly it’s random. It helps me to have people to bounce ideas off of – and since Garfield’s two primary concerns in life are eating and sleeping, there’s plenty of material to be had.

Jim Davis: The internet has affected the biggest change in the comics since the very inception of the comic strip. Thirty years ago there were around 300 syndicated cartoonists. There are only so many newspapers and only so much space on the comics page.

Today, anyone can draw a comic strip, put it online, and be a cartoonist. So the ranks of cartoonists have swelled from 300 to, probably, 30 million! And, as cable TV heralded the end of heavily-censored programming content, the internet has freed cartoonists to address edgier and more mature subject matter.

The fact of the matter is that a lot of these young cartoonists are very good, and that’s a motivator for our generation of cartoonists.

Jim Davis: Find your voice. Don’t try to copy another cartoonist’s style. Stay true to what you know.

I&T Today: Is there a Garfield comic that you’ve always regarded as your personal favorite?

Jim Davis: I don’t think I can boil it down to one strip. Garfield’s nearly 40 now so that’s over 14,000 comic strips. I still have not written the one strip that makes everyone in the world laugh. That would be my dream come true.

Jim Davis: Currently, we’re working on a series of Garfield shorts – 30-second animations bundled thematically to produce a 2 ½ minute cartoon. They’re a lot of fun to work on – you can do things in animation that you just can’t pull off in a comic strip. We’re also working with Six Flags in China on new Garfield theme park rides and entertainment. And we have a movie development deal with Alcon Entertainment, but we’re not officially in production with a movie yet. Once we are, it will be a fully animated theatrical release, something I’m looking forward to with great anticipation.

I&T Today: Garfield has been running daily for nearly 40 years. Do you have any ideas for how you’d like his story to end?