Not many places frighten Bear Grylls – nor do many situations bring him to tears. His televised survival missions on Running Wild with Bear Grylls and Man vs. Wild, harrowing trips with celebrities, and thirst for adventure bear out a simple fact: he is one of the few people on Earth who can be dropped into any of the most hostile, formidable climates and terrains and make it out. His engaging personality, brilliant intellect, and quick wit further draw us into his world, a world he is more committed than ever to presenting and preserving. Our own innate sense of adventure keeps us there. The man knows how to keep us in our primal instincts, even while watching him on TV.

In Grylls’ eyes, razor-sharp despite a week of shooting that began in the Arctic and ended in the Chilean desert, never has it been more important to expose us to the wilderness. In it, he says, we learn the keys to survival, adaptability, and growth as a species in these dangerous climate change times. Now, as the host of the new National Geographic Channel series Hostile Planet, which premiered on April 1, he’s going a step further, giving us the stories and perspectives of the greatest adapters of all – the animals making it work in a stressed environment. 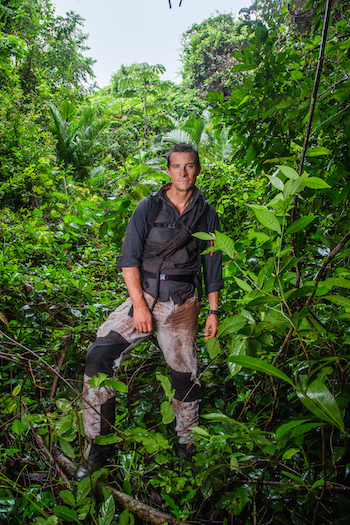 Bear Grylls during production of Hostile Planet in Panama for the Jungles episode.
(National Geographic/Tito Herrera)

“One of the things I’ve gained from traveling around the world for all of these years and doing all of these shows is that I have seen the hard, ugly end of climate change, and the effects it has not just on wildlife, but on the wilderness,” Grylls said, his eyes darting, ever alert to people and surroundings in all 360 degrees of a not-so-wild suite at Pasadena’s posh Langham Hotel. “I think Hostile Planet is smart because it really follows stories, rather than saying, ‘Oooh, look how lovely this is.’ It actually follows the hard reality of what these animals are going through, and the effects of having to live through these changing environments and changing terrains, more extreme droughts and fires and heat and all of that. It’s been a humbling process to not only work on this show with its team, but also just to be able to tell the stories of these animals.

“We see so many people debating climate change. ‘Is it real? How bad is it, really?’ Obviously, the best way is to let the animals tell the stories. It’s heartbreaking – really heartbreaking. I don’t often have tears when I’m taking people out on the other shows, but to see these animals? Really heartbreaking.”

To say Grylls is a champion of environmentalism, conservation, sustainability, and wilderness education understates his value to the planet. The 44-year-old British Special Air Service (SAS) honorary lieutenant colonel and former survival instructor is the world’s leading TV personality advocating the wilderness and the animals in it, thanks to the booming success of Man vs. Wild (2006-12), Running Wild (2014-Present), and his 2012 autobiography, Mud, Sweat and Tears, a runaway bestseller. His resume is so packed with feats it’s almost ridiculous: a second-degree black belt in Shotokan karate, taken to deal with relentless bullying at school (in Mud, Sweat and Tears, he famously quips, “And the bullying? It stopped.”). Then, he attended prestigious Eton College and spent four years as the SAS’ most elite survival expert, only to receive a medical discharge after breaking three vertebrae in a parachuting accident, and summited Mt. Everest.

After all of that, he turned 24. Since, he has mastered three languages, married his wife of 19 years, Shara Cannings Knight, circumnavigated the British Isles on a jet ski, hosted the world’s highest hot-air balloon dinner party at 25,000 feet, parasailed above Mt. Everest in 60 degrees below zero temperatures, climbed remote peaks in Antarctica, and embarked on hundreds of other adventures into which we were invited via TV. And he’s been the U.K.’s Chief Scout – the head of the Scouting program – for eight years.

He started off with solo missions to the most forbidding places and climates, like Man vs. Wild and the aptly-named six-episode Escape from Hell. In Running Wild with Bear Grylls, he brought along some friends whose power in the world seemed to vanish when faced with survival challenges. Among them were President Barack Obama, tennis great Roger Federer, actors Kate Winslet, Ben Stiller, Michelle Rodriguez, and Michael B. Jordan, along with NFL Hall of Famer Deion Sanders.

Now, he’s switching gears and delivering the stories of animals who must contend with the most hostile environment they’ve known for millennia, reminding us of the fragility of the planet – and the need for mankind, businesses, and technology to keep innovating and working tirelessly on behalf of it.

“One of the reasons they asked me to get involved is that they know I’m going to understand a little bit the survival traits needed for these animals to survive what they’re now battling,” Grylls said. “That includes change in terrain, change in climate, and change in some of the predators. I’ve developed an appreciation for the value of resilience and resourcefulness and adaptability as a survivor myself. It’s key. It’s powerful when you see animals. I watch them and think, ‘Wow, they are really, really thinking like a survivor.’ They’re probably not thinking; they’re instinctively adapting. That’s raw nature, isn’t it?” 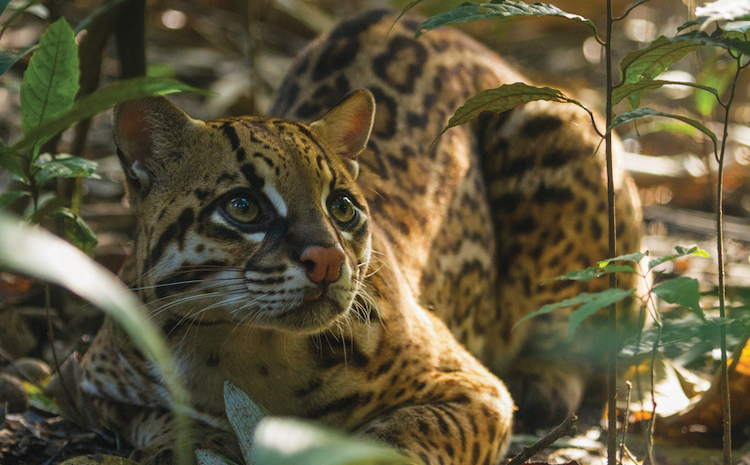 Grylls’ love for the Hostile Planet crew is evident. He’s enthralled with their stripped-down, raw, unintrusive approach to filming animals. Unlike animal docs dating back to the famed Disney pieces of the 1950s and 1960s, there is no written script. Crews set up and wait for the shot that continues the story. They waited five weeks for a jaguar. They waited another six to film a crocodile snapping down on big prey. They watched hatchlings tumble over a cliff – and, in some cases, die. “One of our biggest rules is to let nature be nature; we do not interfere at all,” show producer-director-cinematographer Mateo Willis said. “Even though we want to save an injured chick, we don’t. We don’t want to do anything to impact the natural order.

“We wanted to follow the lives of animals as they live in the modern world,” Willis continued. “Obviously, part of that is adapting to a changing world. We just want to show the reality. We don’t want to preach to people. We have a footprint, too, but we want people to engage emotionally with these animals, feel deep respect for the amazing ways they overcome the challenges of being in the natural world. By making that emotional connection through storytelling and dramatic scenes, we hope to encourage a deeper appreciation. We won’t be able to stop climate change, but we can all do something – even using one less plastic cup a day can help, and it gives you something to feel good about, doing something, instead of feeling hopeless.”

While Hostile Planet isn’t a climate change show – it’s an animal show – Grylls and Willis feel the best way to vest themselves into the production is to present the animals’ lives in ever-toughening conditions, show the impacts of climate change, and let viewers sort it out through the eyes of the animals. Which is why they hired Grylls.

“We know it’s happening, climate change – the world is a lot different than it was even ten years ago. But people go on with their lives as if nothing’s happened, most are doing nothing about it…. But again, watching the animals, they will change and adapt and do whatever it takes to survive, to carry on,” Grylls said. “But the heartbreaking thing is sometimes, even with all of their adaptation and survival skills, they just cannot adapt. Then you have extinction, which none of us want.”

Beyond the physical aspects, Hostile Planet drives to the root of Grylls as a communicator. He loves to tell stripped-down stories that impact our instincts, intellects, and emotions in a compelling way. Not an easy task. Mud, Sweat and Tears is comprised of more than 125 such stories, all as crisp as a songwriter snapping off three-minute radio tunes – but a hell of a lot deeper. Now, he’s working on a series that takes him back to his childhood.

“As a kid growing up, I used to be glued to so much of the natural history shows, like Planet Earth and Blue Planet, but it was always a kind of spectacle of, ‘Wow, this is beautiful…’ And that is how Hostile Planet is, and sometimes it works out, and it’s an amazing triumph,” he said. “And you’re rooting for them: ‘Go! Go! Go!’ And then sometimes it’s heartbreaking and really tragic. But that is the nature and the reality of the world of natural history.

“We’re showing life on the edges. Not just the spectacular, beautiful stuff, but really on the edges and how hard it is for many animals – it’s often the unsung, the ones you don’t even think about, in the world – to work together as a family to survive. And we see so many of the traditional ones. There’s a lion going to hunt whatever. We’ve kind of flipped it. There’s the gazelle, the little baby gazelles in the grasslands, where something like 50 percent don’t last longer than an hour, because they’re surrounded by hyenas and everything. Some of them survive – but how? Seeing it from that angle, for me, was mesmerizing,” Grylls added.

Grylls is riding the peak of his incredible 21st century contribution to entertainment and education. Running Wild has just moved to NatGeo after five years on NBC. Hostile Planet is airing in April and May. He’s flying high in the ratings, and flying deep in humility, always looking for someone else to credit or another animal to feature, always looking out for others. Best of all, his most recent work has been soundly endorsed by the toughest audience in his world.

“I have a family who are very cynical. I have three young boys, and my wife sees lots of our TV shows, and she’s a hard audience to please. And she’s been texting me – they’ve seen some of these clips – and they’ve just been going, ‘Unbelievable! And I haven’t cried watching a TV show for a long time.’ That’s a good sign.”

Author Bio: Robert Yehling is the Editorial Director of Sustainability Today, and STEM Today. He is the author, co-author and ghostwriter of 18 books, including the acclaimed "Just Add Water" (Houghton Mifflin Harcourt), the biography of autistic surfing great Clay Marzo, a finalist for the 2015 Dotty Gray Literature Award for outstanding writing on autism; and Writes of Life: 366 Exercises to Fulfill Your Writing Life (Open Books Press), called by the Midwest Book Review the most comprehensive, diverse, and enjoyable writing exercise book on the market. Yehling has edited and shepherded more than 130 books in all genres, including New York Times bestselling memoirist Lynne Martin ("Home Sweet Anywhere"), and 2015 International Book Award and IPPY Gold Medal winner for Visionary Fiction Lynnda Pollio ("Trusting the Currents"). His engaging, informative presentations have inspired writers for 15 years, and take him to conferences and classrooms throughout the country.