Of all the technologies in the digital age, 3D printing is arguably one of the most revolutionary. It has helped to transform product development by optimizing the design and manufacturing process. Product manufacturers can quickly and inexpensively design, produce, and modify their prototypes and then expedite many of the complicated tooling processes needed for mass production.

3D printing has also democratized product design with inexpensive tools and materials that allow just about anyone to print their own creations. 3D printing plays an important role in maker culture, and it has greatly accelerated the rise of the hacker movement responsible for consumers modifying and repairing their own gadgets.

Over 30 million people worldwide are in need of prosthetic limbs, braces, or other mobility devices, but less than 20 percent have access to them. One of the reasons for the shortage is that the process of producing prosthetics can be time-consuming. An uncomfortable or incorrectly worn prosthetic could quickly go unused and be more prone to damage, so it’s important each prosthetic device be carefully fitted for its user. Moreover, the high costs of some prosthetic devices can make them difficult for users to afford or unsustainable for manufacturers to subsidize.

With a low cost to print and the ability to easily customize the design, 3D printing is making it possible for more patients, particularly in developing nations, to receive bespoke, high-quality prosthetic limbs.

Mick Ebeling, founder and CEO of Not Impossible Labs, realized the advantages of 3D-printed limbs when, in November 2013, a simple project to print a prosthetic arm for a young boy named Daniel became a full-blown 3D printing lab for his entire village in war-torn South Sudan.

Similarly, the organization e-NABLE mobilizes a global network of thousands of volunteers to help design, print, and test basic prosthetic hands that can be provided to underserved populations. Their designs cost as little as $35 for materials and are available to anyone to print.

The rest of us might someday wear a 3D-printed device while nursing an injured limb. Instead of an itchy and smelly plaster cast, a breathable, lightweight, and sturdy splint could be printed on demand directly in the clinic to help immobilize an arm or foot.

One company, Colorado-based ActivArmor, offers such 3D-printed splints that are not only customized to perfectly fit the patient, but could be easily modified to accommodate medical devices that can promote healing or to expose incisions and surgical screws/pins to monitor for the risk of an infection.

3D printing technology can also give other mobility devices some TLC. As part of the hacker movement, broken and discarded wheelchairs, crutches, and mobility aids are being quickly and inexpensively repaired with printed parts. Some hackers are even modifying these devices with 3D-printed parts and electronics to make them more useful for patients.

Two of the most vital organs that support the entire body, the brain and the heart, are naturally considered the riskiest parts to operate on. Both contain certain anatomical features that are unique for every person, which often make them extremely delicate to navigate. Therefore, careful planning must be done before an operation so that the surgeon’s every movement and incision is precisely performed.

Typically, surgeons plan for these complex procedures by studying images or 3D renderings on a screen generated from computed tomography (CT) or magnetic resonance imaging (MRI) data. Though useful, 3D renderings can’t offer surgeons any kind of tactile interaction, which can be invaluable in planning for any potential complications that might arise during the procedure. However, with printed models based on 3D renderings, surgeons can get a far better, more hands-on look.

For example, a full-size body part can be printed using transparent or flexible materials to help surgeons see and feel its internal structures and even train on it with surgical tools and medical devices. Desired sections can be enlarged and printed separately to study the tiny, but crucial anatomical structures that require extra careful attention. And the prints can become a useful visual aid to help in conversations with patients, caregivers, and other healthcare professionals.

Phoenix Children’s Hospital in Arizona has printed over 260 hearts to date that have helped to save the lives of children born with congenital heart defects. The hearts have helped in surgical planning, as well as medical education and family consultation.

Print Two and Call Me in the Morning

While drugs are often touted as a panacea for a great number of health problems, the truth is that they don’t always work. Even worse, drugs that don’t work can still cause side effects. For this reason and others – such as finances, unclear instructions, or a confusing number of pills – patients are not taking their medications when they’re supposed to. Consequently, patients aren’t getting healthier, and medication non-compliance is costing our healthcare system billions of dollars in increased costs.

Some patients don’t adhere to their medication because they simply have difficulty ingesting it. In 2015, the FDA approved an epilepsy drug called Spritam that addresses this problem; it’s 3D-printed with a porous structure to allow for rapid disintegration and easier ingestion. UK-based FabRx is researching how the size and shape of 3D-printed pills affect how quickly they dissolve and are absorbed in the body. They found that by increasing the surface area, the drug is released more rapidly. That could be great news, especially for children who might find it easier to take a rapidly dissolving pill in a fun shape instead of a capsule.

Last year, Daniel Kraft, a physician and inventor, gave a TED talk where he presented the idea of a “PolyPill” that integrates multiple medications into a single capsule. The PolyPill would be 3D printed automatically in a patient’s home with custom-tailored doses of medication based on his or her medical needs. Additionally, the dose in each PolyPill could adapt to data received from smartwatches or other medical gadgets; an overnight increase in blood pressure, for example, could trigger a higher dose of blood pressure medication to be printed onto the PolyPill the following morning.

Personalized, 3D-printed drugs like the PolyPill could potentially increase its effectiveness by helping patients stay compliant to their treatment plan, as well as reduce the likelihood of nasty side effects that often come with a one-size-fits-all dosing approach.

Of all the amazing uses for 3D printing, the ability to print a fully-functional replacement body part might seem the most fantastical. Yet, this technology, known as bio-printing, is actually one of the oldest applications of 3D printing in medicine. In 1999, Dr. Anthony Atala of Wake Forest University successfully used a modified inkjet printer to create the world’s first engineered organ – a human bladder. Since then, his team and numerous other researchers around the world have printed tissues and organs from nearly every part of the body.

It’ll still likely be many years, however, before entire 3D-printed organs will be implanted in patients. Not only do they need to be structurally similar to their native counterparts, but bio-printed organs need to perform all the complex functions of real organs, as well as live in harmony with the rest of the body once they’re implanted. These complexities, as well as the high costs and time it takes to create an organ, will need to be resolved before the replacement organs can become viable. 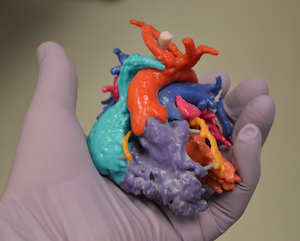 But while we haven’t implanted a completely bio-printed organ into a human yet, research has steadily progressed toward the use of smaller and less complex bio-printed tissues. Functional ears, heart valves, and blood vessels are just some of the simpler parts that researchers have successfully printed over the past few years. Several groups have even developed a special bio-printer that can print new skin cells directly on top of wounds.

Bio-printed tissues are already playing an important role in drug development and education. Since 2014, San Diego-based Organovo has offered a line of 3D-printed liver and kidney tissue that can be used to test the toxicity of drug candidates. And in 2017, Shanghai-based JALA Group, a cosmetic company, successfully bio-printed biologically accurate skin to test their products. The major benefit of these bio prints is that products can be tested on human-based tissues without harming animals.

Both outside and inside our bodies, 3D printing has the potential to radically disrupt medical technology. While many of its applications have a long way to go before they become mainstream, we’re already starting to see some of the ways it’s making healthcare more accessible, affordable, and personalized for patients.