“Love what you do” is a touted mantra of today’s corporate world. However, the stereotype (and often the reality) of Bill Lumberghs and the workaday routine are hard to smother. So, to boost morale and creativity, many companies have taken to hiring specialty consultants for fun team-building exercises. And, as Director of Games for The Go Game, Jenny Gottstein has her finger on the pulse of this intriguing business trend. In this exclusive interview, Jenny Gottstein chats with I&T Today about the implications of injecting a much-needed sense of joy into the workplace.

Innovation & Tech Today: It’s not the most common job title. Introduce the concept of “Director of Games.” How did you become involved in this kind of work?

Jenny Gottstein: I’ve always been really interested in experience design. My background has been in events…Immediately prior this job, I was working in nightlife in New York. What’s interesting is that play and parties are actually really similar as far as mechanics and architecture. One you get a trophy, and one you don’t, but you’re still taking in the same considerations. The basics of Maslow’s hierarchy of needs – making sure everyone who is participating is feeling good and taken care of. Beyond that, you’re really thinking about a group dynamic and perception and how to encourage people to participate in a group activity when they may not be inclined to do so. There’s a lot of overlap interestingly.

As far as how one gets to director of games, I don’t think there’s any right or wrong way. I think it’s just a willingness to celebrate absurdity and find the right people that want to do that with you. So, I started working with Go Game in 2010 as a full-time game producer. So I was producing about 100 games a year…

Our games are real-world adventure games with technology that will turn anywhere in the real world into a game. So, in the course of the game, which could last for a few hours, or a few days, or indefinitely (most of them for a few hours, but we’ve had a full range)— In the course of that game players are receiving missions on their phone that send them around what we call a game zone. And a game zone can be a building; it can be a neighborhood; it can be multiple neighborhoods; it can be multiple cities at once. In the course of the game, players are receiving missions on their phones that have them interact with the environment in unique and interesting ways. 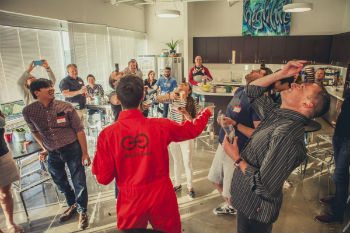 So, for example, one type of mission that they will receive is a location-specific challenge. Like A word clue, or a puzzle that is baked into the physical environment. You have to go somewhere, look around, and figure it out.

Another type of mission is the secret agent challenge where we hire actors and plant them throughout the game zone. Some are in costumes; some are incognito, so players don’t really know who’s in on the game and who isn’t. We do give them some basic parameters. They have to find these secret agents and engage with them with goofy challenges for points.

We also have what we call head-to-head missions where teams can challenge other teams to a duel. A duel can be a dance-off or a compliment-off. It can get pretty heated, as you might imagine.

Then the crown jewel of these activities is this thing called “Creative” where players get open-ended prompts on their phones that they have to respond to with creative photos or videos. At the end, we take those photos and videos and add music and sound effects and the rest of the group gets to vote on them American Idol-style on their phones. That is our flagship. What I described is the most basic game that we do.

We actually started doing these back in 2001, so the original games were played on the Nokia brick phones. You could play Snake and you could play a Go Game. And we’ve evolved. Nowadays, we do all sorts of spinoffs of that basic concept. We do espionage games, music video games, game show games, zombie apocalypse and disaster preparedness games, and we’ve really taken this format, which was originally just for the heck of it to have a good time, and turned it into a vehicle for what we call “applied play” — using play for some other means, be it training, team-building, marketing, tourism, preparedness.

These days we run about 1,000 games a year all around the world for all kinds of clients for different kinds of reasons. As Director of Games, my job is to both manage our domestic game-running team and work closely with our tech team as we’re developing new features, new products, and also to work with our international partners as they bring this technology but their local know-how to their specific regions and design teams in completely new contexts.

I&T Today: How would you pitch, say, IBM the idea that they need to celebrate absurdity?

Jenny Gottstein: We don’t have to do that much pitching because, thankfully, in recent years, there’s been this acknowledgement, both in the academic community and also in the private sector in general, that creativity is essential in any industry at any stage of the game. Thinking critically, thinking with new perspectives, mobilizing with innovation – that’s generally valued across the board.

Now the conversation is, “How do you do that? How do you create that culture of creativity? How do you encourage people to take agency and ownership in their work and think about how they can improve it and do great things with the tools that they have?”

I&T Today: Do you have any stats that prove the long game of this tactic? Proven long-term benefits of adding play to the workplace? 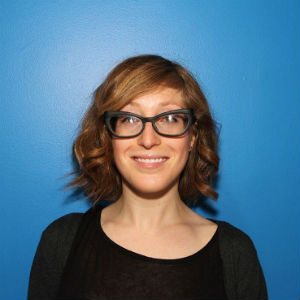 Jenny Gottstein: One thing we have been plugged into – just because it’s easy and hyper-public, which I think speaks to the long-term impact of not play in and of itself, but in general: fostering soft connections between individuals in the workplace. Google did a massive internal study called Project Aristotle. They were trying to get to the bottom of what makes for successful teams. Obviously, being Google, having strong teams is important to them, and they were looking at all of these different factors. Like, is a strong team all extroverts or is a strong team all introverts or is it a mixture? Looking at all the different elements that could make or break a team cohesion.

What they found is that nothing really matters all that much. Nothing has a huge impact, except whether or not a team has a sense of psychological safety with each other. In other words, if participants, if members of the team, feel safe taking risks, being creative, speaking up with their teammates, the matter of hierarchy within that group, if they feel safe and represented and welcome. That team is going to do much better than any other configuration.

Then the question becomes “How do you create that special sauce?” That’s where things like play… And I’m not saying you can only do it with play. No, you can do it with a lot of things. You can do it by creating beautiful spaces for people to work in; you can do it by all sorts of granular as well as high-level team dynamic and culture strategies. But from our perspective, what we’ve seen day in and day out in presenting these games, is that games provide a pop-up space for feeling safe and having a good time. That and celebrating that and bringing that into the culture early and often can have a long-term effect in building the best, most successful teams in the world.

At this point, the data that we have is 13,000+ games that we’ve done and just seeing the results over time. And the fact that we don’t have a marketing team; we have a small field that receives incoming inquiries and that’s our entire inquiry process. Our clients are repeat clients over years.

I think that is the evidence we need to keep going. That obviously something is working for these people. And it’s evolving as the industry evolves. So, in previous eras games were used for different reasons. Like, in 2008, games were used for morale. It was such a stressful time. In flux. That games were kind of the touch point where people could come and circle up and be supportive of one another. Now, games are being used for recruitment, to show others how exciting it is to work with a particular company. So they have games for prospective employees. So, there’s always different use cases, and we’re seeing it change over time, but I think the consistency to which people turn to play is the proof in the pudding that it’s having the desired impact.

You can learn more about Jenny Gottstein and The Go Game here.