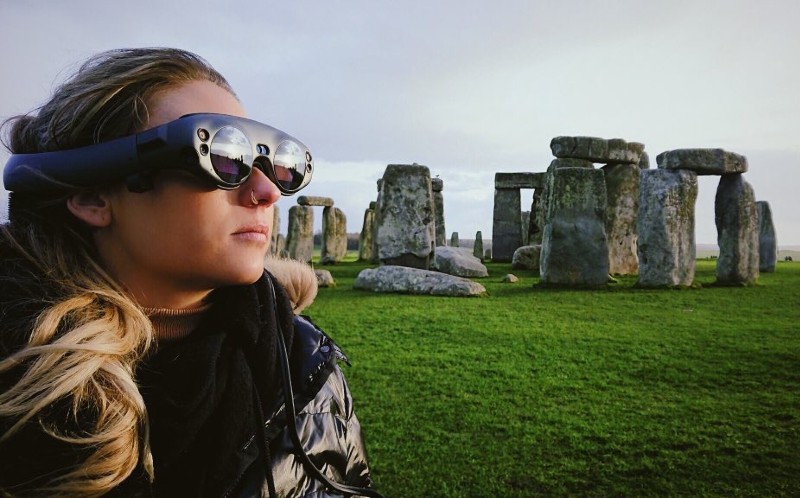 Of everything CES has to offer, one of the most fascinating areas is the virtual, augmented, and mixed reality section. There’s something incredible about standing in a convention center and finding yourself suddenly transported to another world.

Whether you’re riding a roller coaster underwater or driving a car through a virtual city, the experience is somewhat disorienting while simultaneously magical. This year was no exception, as dozens of VR, AR, and XR companies offered demonstrations and exhibits built to entice and inspire.

Though there’s never enough time to try them all, these are a few that made a lasting impression long after the show ended. 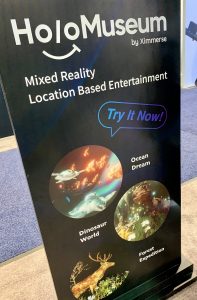 The HoloMuseum by Ximmerse offers an immersive mixed reality educational experience for people of all ages.

Imagine turning any space, like your living room or a classroom, into a virtual museum. With HoloMuseum XR, any room can be instantly transformed into an interactive educational world. Featuring a lightweight headset (more like a headband with an eye visor) and an intuitive handheld remote, this Ximmerse innovation is easy to use, comfortable, and awe-inspiring.

The platform offers a variety of educational experiences, but the one they demonstrated at CES centered around dinosaurs. As you look around, suddenly little plants start to spring up and a narrator’s voice projects from the headset describing what the wearer is seeing.

A Tyrannosaurus-rex walks in, seemingly from off-screen, and looms ominously over the wearer, displaying not only its immense scale but also its voracious appetite as it bears down on an unsuspecting Triceratops.

Suddenly, a baby T. rex walks in, just a few feet tall, and the wearer is encouraged to pet the animal and feed it virtual steaks. All the while, the cheerful narrator details the animal’s diet, territory, and time period.

The most visually inspiring moment of the demonstration occurs after several minutes interacting with the dinosaurs. The sky begins to darken and red-orange meteors tear out of the sky sending fiery sparks cascading through the air as they smash into the ground. It’s a dramatic way to emphasize the unexpected and horrifying end the giant beasts likely suffered.

For educational purposes and for sheer entertainment, the HoloMuseum XR was one of my favorite mixed reality offerings of CES 2020.

This year, they showed off their ICAROS Home and ICARACE global online multiplayer platform for VR esports.

This unconventional fitness system supports only a portion of the user’s body, forcing them into a sort of plank position. The user wears a VR headset and is immersed into a virtual world where they can participate in different activities like flying, swimming, or racing.

Your entire body controls the motion of the platform, which exercises the user’s core while improving balance and muscle control. At its simplest, it’s a VR gaming platform designed to push users off of the couch and into an invigorating workout routine. 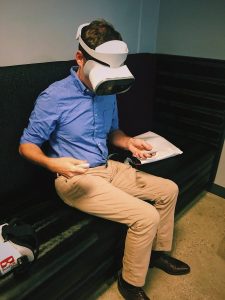 A BadVR employee wades through some virtual datasets. Image courtesy of BadVR.

Step inside your data. That’s the tagline for BadVR and that’s exactly what this future-facing tech allows users to do.

“BadVR brings immersive technology as a scalable, fast, and universally accessible solution for visualizing and analyzing modern datasets,” explains BadVR Founder Suzanne Borders. With this technology, data is no longer an ambiguous set of ones and zeros, charts and pie graphs, it’s a virtual world of information the wearer can visually step into and analyze.

Want to know how many sales developed from the leads you met at a trade show? If you have the data, BadVR lets you see a headcount. Want to know where you receive the best WiFi signal? BadVR turns signal bars into floating objects distributed throughout the room, ranging in color from red (poor signal) to green (strongest signal) so you can visualize the information rather than simply reading it.

Nearly any set of data, big or small, can be translated into a virtual representation for analysis. For the big-data-centric future promised by smart cities and 5G, this type of data visualization will become the cornerstone of turning information into actionable insights.