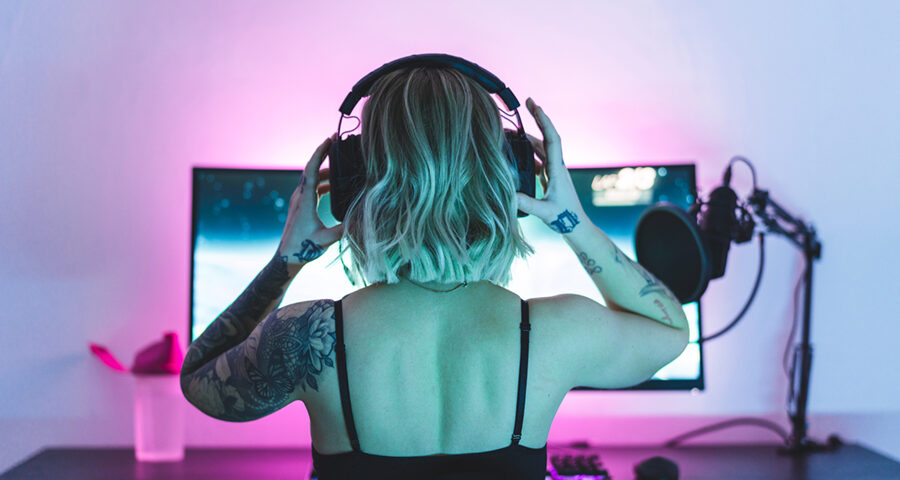 Women face an interesting landscape in gaming, but sexism isn’t the only issue.

Despite its name, there is more to gaming than just fun and games.

There is a controversial dark side of gaming that sometimes leads to a battle between the sexes. While PC gaming has a competitive advantage over console gaming due to faster processing speeds and less lag time, many gamers complain of another unfair competitive advantage — scantily-clad, sexy female gamers.

While gaming has a reputation for being hostile toward women, especially in the past, it’s necessary to unpack this scenario. While some men merely can’t handle being beaten in competition by a woman, the resentment is not necessarily, solely due to sexism. The issue derives from a perceived unfair competitive advantage that female gamers achieve by using their (ahem) assets to gain more online views and subscribers than their male competitors.

Not everyone can earn a living from gaming tournaments, which are separate from everyday online gaming. People who can’t make a living from tournaments (as only the winners and finalists get paid) can potentially earn a living by gaming with spectators, similar to how people earn money on their YouTube channels where the number of subscribers and views drive up their potential value to advertisers.

According to Quartz, “Twitch, the Amazon-owned platform that live-broadcasts gamers playing video games, is the undisputed champion of its arena. It hosts 91% of all video game streaming, dwarfing competitors from YouTube and Facebook.”

On Twitch.tv, subscribers can watch for free. However, attractive women outshine their male counterparts often by enticing people to make a one-time donation or become a channel patron for a monthly or annual fee. Women are earning (some would say soliciting) more donations due to being overtly sexy and not necessarily due to their gaming skills.

While some would argue that no one is forcing anyone to watch them play, parents are crying foul as their kids buy gift cards and make donations with their allowance or parents’ money.

More nefariously, some women in their late 20s to early 30s do their hair and makeup to appear much younger and appeal to a young demographic.

Needless to say, if men in their 30s were dressing like teenagers to solicit money from young girls, this scenario would cause much more of an uproar. However, since women are perceived to be doing the luring, it continues unchecked.

Many channels now have a warning screen stating, “The broadcaster has indicated that this channel is intended for mature audiences.” However, there is no way to verify if the users are mature.

When Twitch was acquired by Amazon, they began age verification. Still, there is no way to confirm the accuracy of a person’s age. Kids can easily lie about their age to get on the platform and give away their allowance by buying tokens for adult gamers.

In response to this scenario, women gaming in athleisure wear with a full camel toe and cleavage more suited for the adult section of a “blockbuster” video store, on-camera can claim all they see are usernames, and as such, they have no idea if kids or adults are providing the donations.

Some women wear t-shirts over just panties, then make excuses to get up from their console to show off their “assets.”

This can be interpreted as borderline sexual role-playing, such as the cheeky “teenager” in her “Catholic high school uniform” answering her phone or getting a drink of water in a thong. While conceivably some people do game in their undies, doing it live appeals to voyeurs.

By comparison, male gamers tend to dress effortlessly or more “come as you are” in sweatpants.

“I watch gaming videos to see people who are better than me, male or female,” said Colton Bostic, an 18-year-old gamer from the Midwest. “But I’m not watching just to look at the girls. If I want to see boobs, there are much better sites for that.”

In these scenarios, women and disturbingly underage girls are much more popular and achieve more views, which generates higher ad revenue due to a higher number of subscribers.

Unsurprisingly female gamers bristle at the thought of being “slut-shamed.” Many view their outfits as cosplay, (think outfits inspired by Harley Quinn, Ghost in the Shell, or Æon Flux, for example) or an extension of their gaming fantasies.

However, these costumes are viewed by some as “camming light” or dressing and acting in a sexually provocative manner to elicit donations and drive up their viewers.

“My prime gaming days were 2004-2007. Many more people are involved in watching other people game with the advent of Twitch and gaming influencers. The community aspect has grown a lot more. The hardware and graphics have improved and become more cinematic,” said Halo player Roger Robinson.

While financially speaking, a console is arguably more affordable than a PC, visually speaking, a PC is able to be “spec’d out” to give almost 3D-like quality images at almost zero latency. A better spec’d PC will perform better against an inferior PC. Sometimes it is almost like cheating to play against someone with an inferior PC. Consoles allow everyone to compete at a similar level.

It’s understandable if someone is willing to invest their time and up to $5,000 into a superior gaming system, they don’t want to level the playing field, they want to dominate it. If that investment is completely laid waste by a hot girl who uses her cleavage to score tokens, resentment can build quickly.

“I’m honestly not much of a gamer,” said Berj Joulyaian.

“I have a Switch that was good for playing Zelda during the pandemic. My sense about the PC/console divide is that you can build a much more powerful desktop than the modern consoles. But, like, Xbox and PlayStation are a much better-tailored gaming solution, in terms of the titles, interface, etc., MS seems to be eating Sony’s breakfast on the cloud gaming side.

“However, none of that matters if I get distracted by boobs.” ■