There are two ways of looking at autonomous vehicles, and both of them are true. A thorough analysis by one of country’s leading automotive insurance research groups threw some hard data—some would say cold water—on self-driving car technology and the reactions were in predictably stark contrasts.

Self-driving cars could only prevent a third of U.S. crashes

12,000 on-road deaths each year could be prevented by self-driving cars

The Insurance Institute for Highway Safety (IIHS), funded by the insurance industry and usually pushing for more stringent safety standards, poured over data from more than 5,000 police-reported crashes to sort out the driver-related reasons for each accident (which I guess technically means it wasn’t an “accident”). In their analysis they found about one-third of the crashes could be traced exclusively to sensing and perception errors—or driver incapacitation.

Traffic experts estimate that nine of 10 so-called accidents are the result of human error. The toll from these crashes is roughly 36,000 deaths per year, as well as a crushing number of serious injuries.

What the IIHS study found was that most crashes resulted from a complex variety of errors, such as making wrong assumptions about what other drivers, bicyclists or pedestrians might do next, driving too fast or too slow for road conditions, or bad driving decisions while trying to avoid something. Many of the problems came about from multiple mistakes.

Autonomous vehicles have been touted as the way to end the scourge of human carnage on the streets and highways. The head of Mobileye, 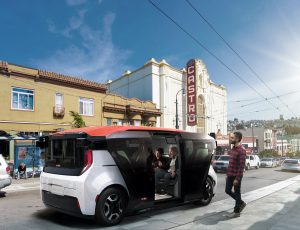 an Israeli tech developer (now part of Intel) that supplies some of the key technologies for self-driving vehicles, told CNN in unequivocal terms that “robotic systems will be better than a human driver.”

This may be the more nuanced real world impact that IIHS discovered. While the goal of autonomous vehicle technology is to replicate the human brain that traditionally controls a car, but without the distractions in order to eliminate collisions, real world examples of short-comings of the new technology are extent.

Several companies have promised that self-driving vehicles would be on the road earning revenue by this year. Two of the top companies in the field—GM’s Cruise and Alphabet (Google)’s Waymo illustrate the unexpected impact of current events and the shift that is going on right now.

Cruise, a Silicon Valley start-up bought by General Motors in 2016, originally planned to launch its commercial self-driving cars last year, but delayed to do more testing. Cruise CEO Dan Ammann was quoted as saying his company was “getting relatively close to approaching that level (a superhuman level of safety performance) of performance.” The company showed off its Origin, the prototype for a multi-passenger autonomous vehicle (i.e., robotaxi) early in 2020.

In spite of attracting substantial investments from Honda and venture firms, the 2020 COVID-19 pandemic produced a hiccup that led the company to lay off eight percent of its 1,800-person staff and halt any definitive predictions of when those robotaxis would hit the streets.

Down the peninsula Waymo also had some big news as the region was about to go on shutdown due to the novel coronavirus. It closed a round of $2.25 billion of external funding, augmenting what had up to this point been an internal project financed by what used to be known as Google. Waymo had developed strong ties with Fiat-Chrysler Automotive (FCA) and Jaguar and was well into its test program in Arizona, where it claims to have more than 1,500 monthly active riders.

But in a recent interview with CNN Waymo CEO John Krafcik made his company’s plans sound rather modest. “The first examples (of commercial self-driving cars) are closer than most people think,” Krafcik said. “But ubiquity is farther away.” He laid out a very incremental strategy based on expanding its Arizona and San Francisco operations bit-by-bit geographically. He added: “It won’t work everywhere, all-the-time.”

So Google’s “car of the future” remains firmly fixed in the future as do full self-driving machines from Ford (in a joint venture with Volkswagen) and several Chinese companies (like Waymo, not all of whom are car companies).

Back to the Study

Two things are clear from this brief review of the autonomous vehicle industry. The technology continues to advance and has reached a quite robust stage. Even with these advances, it is not ready for prime time—and when it does roll out, it will likely be in a limited fashion.

Which leads us back to the IIHS study. While it concluded that self-driving cars couldn’t handle the majority of crashes any better than a human driver, they still could cut road crash deaths by one-third—and that’s a big deal.