Scarlett Johansson on the Cultural Influences of Ghost in the Shell

From our complete interview with Scarlett Johansson, which you can read here.

Innovation & Tech Today: In one of your most memorable performances, you played the digital assistant Samantha in the film Her, and here in your upcoming film Ghost in the Shell, you’re once again starring as an artificially intelligent character. How did you prepare for this role and can you cite any specific influences? 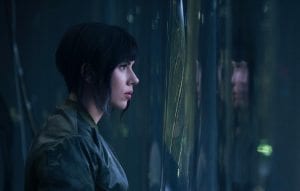 Scarlett Johansson: Well, I wouldn’t say my character is actually an A.I. character because she has a human brain. She’s sort of a cyborg, I guess you would say. I didn’t have any influences really. I think it’d be sort of an impossible character to be influenced because she’s, you know, a person who’s experienced – well, she’s both a person and not [laughs].

I&T Today: Here you are, an empowered female main character in a futuristic police surveillance state where everyone is connected through technology. Dare I ask, Why now? What drew you to this role and what do you think makes its themes particularly relevant today?

SJ: I think oftentimes when we see the future, it’s portrayed in a dystopian way and other times it seems sort of sterile and characterless. I think Rupert’s [Rupert Sanders, the director] idea of the future is one that is a lot more realistic, or at least based in some kind of realism. I think it shows a society that is very much disconnected as a result of how connected they are. And, I think also of course, you see different characters in the film – people in general – having these sort of cyber-enhancements to make their lives easier. But, in a way, some of the characters in the film, certainly my character and also Pilou’Asbæk’s character Batou, who is very much human, express longing for just everyday life as it was, or as they either remember experiencing it. And it seems like a conversation that is echoed in the discourse today.

It seems like a conversation I have with friends of mine where we kind of yearn for the good old days where you could actually just get on the phone and call somebody, and not have to decipher a text message or wait for an email. I watch my friends kind of struggle with what the appropriate email etiquette is. I think we all sort of yearn for a time when everything was more to the point, more visceral and real.

Scarlett Johansson on the Cultural Influences of Ghost in the Shell