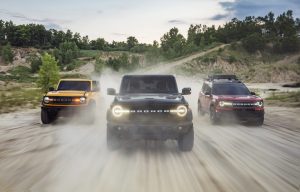 Future SUV buyers are going to be able to choose from a very green path or one emphasizing horsepower and off-road proficiency.

The crossover/SUV segment has been the hottest part of the auto market for some time. Buyers have swapped sedans for the utility of these more functional (and more expensive) models. 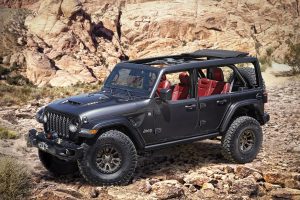 The biggest entry was the new Ford Bronco family (three district vehicles) showing Ford finally moving to challenge Jeep’s dominance of the off-road SUVs. The Bronco’s First Edition, with just 3,500 to be built at $60,800 each, sold out in the first week, according to Ford.

It features serious off-road goodies like a heavy-duty suspension and 33-inch tires, but also includes the intriguing Sasquatch interior package. The base model will start at under $30,000 when it goes on sale next spring.

Jeep was not absent and took the opportunity to introduce a potential future model that upped the macho appeal of its compact off-road machine. The Jeep Wrangler Rubicon concept packs a 450-horsepower (hp) V-8 engine. “Jeep enthusiasts have been asking us for a Wrangler V-8,” the head of the Jeep brand said in explaining the introduction. Of course, other components were beefed up to match the engine, including heavy-duty Dana 44 axles with front and rear lockers and 37-inch tires. 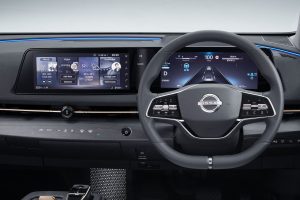 On the other hand, two new electric SUVs appeared on the market—one from Nissan and one from BMW.

The Ariya is similar in size to Nissan’s best-selling Rogue crossover, but aimed at a new audience. The all-electric compact SUV will come in front-wheel drive and all-wheel drive (dual motor) versions. It offers two powertrain packages, a 63 kWh battery pack mated to a single 215 hp electric motor or an 87 kWh battery with 389 total hp for two motors.

Range for the two battery setups are estimated to be 267 miles for the smaller battery and 379 for the larger one, based on the generous WLTP test cycle. In the U.S., Nissan said it hopes to exceed 300 miles of range with the larger battery. 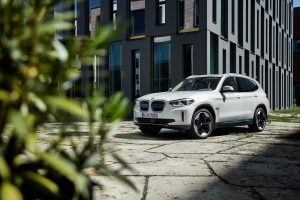 BMW is electrifying its best-selling model

Inside, the Ariya concept had a minimalist dash with two large display screens. It will come with the latest version of Nissan’s Safety Shield 360 that will allow some hands-off-the-wheel driving. The Ariya will launch in Japan mid-2021 and arrive in the U.S. market before the end of next year.

The BMW iX3 is a reconfiguration of the brand’s best-selling U.S. model, replacing its internal combustion engine with a 286 hp electric motor and an 80 kWh battery. Some of its drive technology will find their way into the coming iNEXT and i4 due on the market next year.

Built in BMW’s joint venture plant in China, the BMW iX3 will launch in that market, followed by Europe and the U.S. in 2021.