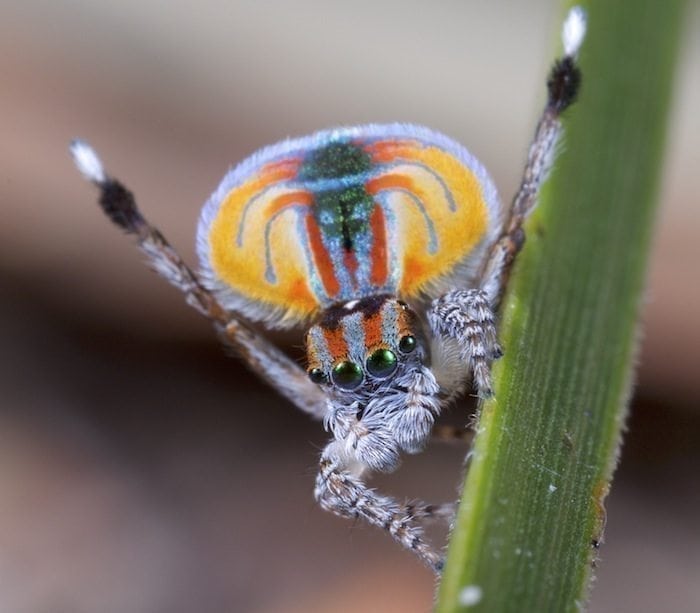 You’d never consider spiders to be symbols of romance, especially during this time of year. Depicted as hairy, with dripping fangs and far too many eyes, spiders have scared the freckles off Ron Weasley and other fellow arachnophobes. However, among the tarantulas and black widows that dream of tasty flies to gobble up, one tiny peacock spider raises its legs and clicks, “I wanna be a dancer.”

The Peacock spider, or Maratus personatus, can fit on the tip of a fingernail and is, surprisingly, native to Australia. The continent is known for its venomous snakes and vile predators, but this spider is actually harmless. Bright colors on insects usually indicate that the organism is poisonous. However, the bright colored patterns on the Peacock spider can only be found on males and is used for mating purposes.

That’s right. This tiny spider put his legs in the air and waves them like he just don’t care. The courtship dance involves the spider lifting its abdomen in the air and extending two flaps. This causes its colorful abdomen to expand and look bigger and flashier, much like how a male peacock will flash its feathers to delight peahens. The spider then lifts two of its legs and waves them above their head. The spider will also move side to side and waggle its abdomen. If the female is impressed with the display, she chooses the male spider as her mate. However, female spiders who are not impressed by the dance have been known to attack, kill, and eat their potential suitors. The male spiders better hope their dance is to die for.

Due to their size, these spiders are incredibly hard to find and arachnologists continue to search and study this tiny creature. Don’t be too disappointed if one of these party animals doesn’t show at your Halloween party.

Make Your Home Work For You

The New Office; How The Pandemic Reshaped The Work Space