Mercedes-Benz invented the automobile 134 years ago—and now the  automaker intends to reinvent transportation once again. New models introduced in 2024 are being equipped with a still-being-designed super processor from chipmaker Nvidia that will allow customers to upgrade their cars later and add new features like self-driving capabilities.

Over the air (OTA) updates are not new. Tesla uses this technology as one of its “surprise and delight” features. It made particular sense since Tesla initially didn’t have many dealerships for customers to bring their cars to—and also lent a distinct high-tech veneer to Silicon Valley’s first automotive venture. Tesla owners are now used to waking up on a random morning and finding their car may be able to do things it couldn’t the day before. Most recently, Tesla added stoplight and stop sign recognition to its Autopilot adaptive cruise control system, so drivers no longer had to intervene when faced with these common traffic situations. 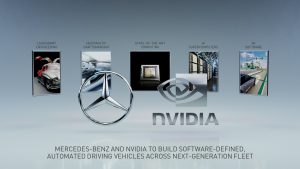 Mercedes-Benz and NVIDIA will build software for automated driving

Mercedes and Nvidia aim to up the ante with a computer-system-on-a-chip that’s under development—the Nvidia Orin. It will be capable of computing an outrageous 200 trillion operations per second (200 TOPS), which will enable the addition of a variety of autonomous features, some of which will be available at launch.

The plan by the two partners is to add the system to each new model introduced starting in late 2024, eventually spanning the entire Mercedes line from A-Class to flagship S-Class models. It will not be restricted to high-end models. As expressed by Daimler chairman of the board of management Ola Källenius, this creates a “perpetually upgradeable machine” that will offer “endless possibilities” to the customer as well as new business opportunities (i.e., upgrades to sell) for the automaker. 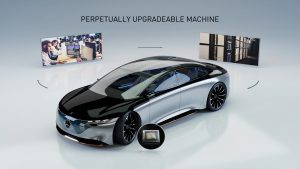 Thousands of Mercedes and Nvidia engineers will jointly develop artificial intelligence (AI) and other applications that will be offered to customers over the life of the vehicle.

In the online media event announcing this non-exclusive “strategic partnership” Källenius declined to compare this with Tesla’s OTA system, but he did go on to discuss the importance of safety and testing before software releases, a not-too-subtle jab at the Tesla practice of beta-testing its software and hardware with customers.

Jensen Huang, founder, and CEO of Nvidia said this partnership could create a 20-year-old Mercedes driving around with state-of-the-art software and advanced driver assistance system (ADAS) technology. The basic processor is being designed with built-in headroom “for things that haven’t been invented yet,” he said. 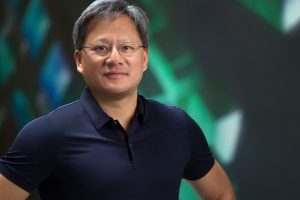 Huang added with this new operating system, “the definition of a car will change forever.”

Källenius said Mercedes will continue to design new, compelling cars to entice folks to trade up from their older “iPhones on wheels,” but some impact to the sales cycle is expected from these new software-defined cars. Expect the definition of a “new” car to change starting in 2024.