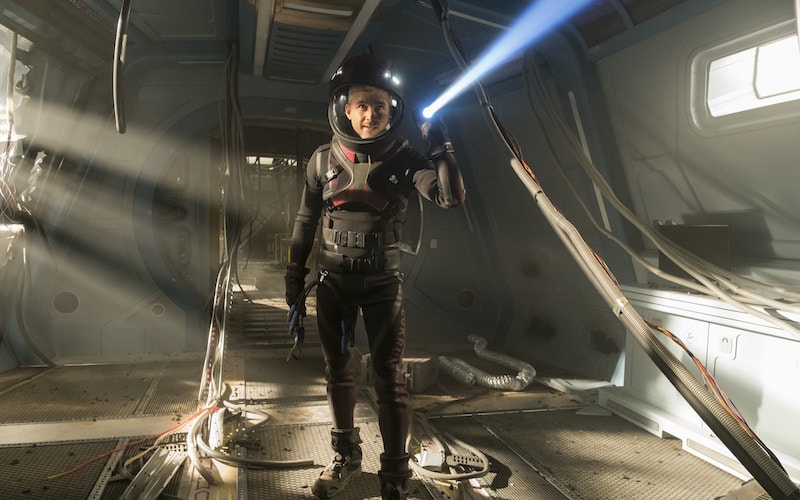 NatGeo’s Latest Tech Entertainment: Mars and Valley of the Boom

One thing about TV network press days: everyone is happy and optimistic. New programs and seasons launch, storylines feel fresh, and audiences salivate when crisply produced trailers hook them into future nights of viewing. Especially when National Geographic Channel throws the party.

In late July, hundreds of invitees escaped a 105-degree L.A. day in the Beverly Hills Hilton, pretty much the place to be seen since JFK and the Rat Pack made it their favorite SoCal hotel almost sixty years ago. NatGeo brought the goods, highlighted by live look-ins on Yellowstone Park, appearances by Gordon Ramsay and Jeff Goldblum, and first-class panels.

Random and interesting conversations were afoot: West Wing alum and now Valley of the Boom star Bradley Whitford talking story structure with the Huffington Post founder Arianna Huffington; Ron Howard mixing it up with astronauts Leland Melvin and Dr. Mae Jemison; and actor-comedian Steve Zahn wondering how he woke up one day and realized he was fifty – which brought out aging comments from twenty-something Valley of the Boom co-star Dakota Shapiro.

All joking aside, two shows that feature different eras of technology caught our eye: Mars, which just wrapped its second six-episode season, and Valley of the Boom, which debuted its six-show run in November.

What will happen when we get to Mars? What will we find? What science will we be doing? How will we survive and form a community?

All of these questions form the underpinning of Mars, which reached an impressive 34 million viewers in its first season. A much larger audience was expected for Season 2, in which commander Hana Seung (played by Ji Hae) and her team dealt with the task of extracting liquid water, growing their community, and establishing a bigger presence.

“This whole thing has been an experiment, a fun experiment,” Executive Producer and Hollywood superstar Ron Howard (Apollo 13) said. “At the outset, we didn’t know the ratio of what would be scripted and what wouldn’t. Our first task was to sort out what this adventure would entail. By the time we created the initial adventure and went through a season, we found some elements we wanted to explore: what happens if we commercialize? How will we get to the water? What about human relationships… having a baby in space? And what projects will the astronauts be doing for science, as well as forming a habitat, a community? I think if you look at all of these things as a whole, and then with our hybrid format, we have a show that gives us a sense of what a Mars colonist will have to deal with.”

Using a combination of drama and education, the six-episode format weaves documentary in and out. For this season, they matched interviews with footage of Earth activities that we need to address to live on Mars – such as the invasive and ultimately harmful way we extract resources. Since Howard and team built this series on what we actually know about Mars, it was a mighty risk to add a fictional body of water to Season 2.

The risk turned to reward on the morning of press day, when it was announced that a 12-mile lake had been located beneath the Martian South Pole. “Finding water on Mars is central to the second season, and how it will be extracted,” said Antonia Juhasz, a resources expert and author of Black Tide, which covers the BP oil spill. “Will we learn the lessons we’re learning on Earth, from our mistakes with fossil fuel extraction, and how it’s harmed the Earth? Will we learn from that when we get to Mars? And how do we go about extracting the water resource on Mars?”

“That was purposeful from the beginning,” added Stephan Petranek, on whose book How We’ll Live on Mars the series is based. “The writers asked if they should mine magnesium, gold, platinum, and I said, ‘Water.’ Then we ran into the wall because there was no evidence of liquid water on Mars. But every astrogeologist I’ve talked to at NASA is absolutely 100 percent convinced there’s ground water on or below the surface of Mars … Tons of water. Now, we’re looking pretty smart.”

Astronaut Leland Melvin said that working on the series “was like being in space again.” After spending two tours and a total of 23 days on the International Space Station in 2008-9, Melvin now serves as Associate Administrator of Education for NASA and President of Spaceship Earth Grants. He also hosted the Lifetime show Child Genius and advised the Obama White House on STEM education.

“When I was in space, I experienced this shift called the ‘orbital perspective,’ which has happened to a lot of astronauts. I realized that to bring kids fully into the space experience, we needed to match the science and exploration with some form of entertainment – and in Mars, we have it.

“If we’re going to continue to explore as a species, everyone has to be a part of this journey. Kids might look at the night sky, but then they look down at their devices and tablets – and kind of get stuck there. I want to be sure they continue to look up, and get geared into their environment, their universe.”

Part of the allure of Mars is installing a female Asian commander, according to Melvin. “This helps to assure that kids can watch this show, no matter their gender or color, and say, ‘I can command a ship or go to Mars someday.’”

“I worked with and studied the career of Mae Jemison closely,” said series star Ji Hae, referring to the legendary NASA astronaut, also an advisor on the show. “I admired not only her science and her experiences, but also her compassion, her empathy. So on the show, I try to command with skill and empathy.”

Valley of the Boom 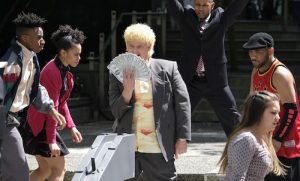 Let’s visit a great story in recent Earth history: the world’s first graphical interface browser. Silicon Valley and tech became every bit the 1990s version of the Wild, Wild West, as ideas, technologies, and money flew around while people sought the best way to jump on the train and invest in a new phenomenon called the internet.

Roll out Valley of the Boom, a six-part series starring Bradley Whitford, Steve Zahn, and Lamorne Morris loaded with drama, discovery, humor, and some nasty corporate takeover attitude. It concerns the first browser war between the popular Netscape and the mighty Microsoft. That ended when Microsoft crushed its much smaller competitor – and pled guilty to anti-trust violations. However, the damage was done: Netscape, a brilliant browser that once held 87 percent of eyeballs, was gone. Valley also recalls the creation of theglobe.com, the first social network, which predated Facebook by a decade.

“This is an amazing founder story,” says executive producer Arianna Huffington. “Marc (Andreessen) invents Netscape in college, then teams up with Jim Clark, an already successful businessman. They move to Silicon Valley and bring their friends, kind of Ocean’s Eleven-style, and they live on chocolate milk and work around the clock.” After the room erupted in laughter, Huffington added, “Then they bring in a genius, Jim Barksdale, who becomes their CEO.”

“Barksdale had this understanding of networks because he came from FedEx,” Bradley Whitford, who portrays Barksdale, explained. “He understood that if you invest in a warehouse in Anchorage and you’re not making money, it still makes sense because you will become known as the ubiquitous shipper. And yet, he felt this responsibility that if you have an IPO, we have people working for us, we have to come through – but we have no money. What they used to call profit.”

To recreate the wild, kinetic dawning of our online world, Matthew Carnahan, executive producer and director, proposed something: “When NatGeo asked about doing something, the best way I could respond was to say, ‘Yes, but I want to ruin your network.’ I want to find a way that’s as disruptive as these people were in their endeavors.”

Whitford and Huffington also discussed the cautionary tales in Valley of the Boom, tales that resonate here and now. “One debate is, ‘are we going to make it subscription? Or do we not care about revenue and choose to focus on user growth?’ That’s a very big debate today,” Huffington said. “They were talking about it then, too. That was the beginning of having an IPO in a pre-revenue company.”

“We are at a moment that we have to adjust our relationship to technology,” Whitford said. “We cannot be victims of technology. Anyone who’s a parent…” the father of two paused and rolled his eyes. “A parent is thinking, ‘God, I got my kid an iPhone, why didn’t I just get him a crack pipe? It would’ve been cheaper. And eventually, they’d put it down!”

Valley of the Boom premiered November 1, 2018, on NatGeo.