Acting is a notoriously unnerving profession. But can you imagine what it’s like to regularly perform on the set of a Michael Bay film? Thousands of dollars’ worth of explosions are being set off around you, and, if you flub your lines, all of it has to be reset.

Very few professional actors ever have to face this kind of pressure, but it’s something to which Transformers veteran Josh Duhamel has grown more and more accustomed during his run with the franchise – which marked its 10th year with this summer’s The Last Knight.

Playing Lt. Colonel William Lennox ever since the debut of the successful blockbuster series back in 2007, Duhamel has some unique insights regarding what it means to be a mainstay of big budget sci-fi action. As he discusses in this exclusive interview, the films have become such a huge part of his life that they’ve affected everything – from his career to parenting.

Innovation & Tech Today: This is the 10 year mark for the Transformers series, which is astounding. What’s it been like to stick with something of this scale for this long?

Josh Duhamel: Yeah, I mean it’s been a huge part of my life for 10 years. I feel very blessed to be a part of it. It’s not easy to be a part of a franchise that’s this successful, so I never really take any job for granted, but this one really kind of changed the trajectory of my career in a lot of ways, since it’s so global.

…It’s unlike anything else that I’ve done because they’re so big and you just sort of feel like a worker bee amongst a million other worker bees, working for one thing. It’s intimidating, but the energy on the set – there’s nothing like it. Even if you’re tired from the day before, or if you’ve been going straight for five months, [Michael] Bay walks on that set and it’s on point. I love that. I love that he’s able to, every single day, get an entire army of people working for one thing.

It still fascinates me how he’s able to see this on such a large scale as a director. I’ve always been a big proponent of Michael Bay. He gets beat up a lot, but he’s a really talented dude. So, you know. I learn a lot. Just to see how movies are made on a scale like that is something to behold.

I&T Today: Would you say that at this point, you’re accustomed to big-budget acting? How would you say your experience on these blockbusters informs your work on the smaller-scale stuff? Or is it the other way around?

Josh Duhamel: It’s a really interesting question, because at the end of the day you just want to tell the truth. You always have to try to fall back on the work. There’s preparation, being ready for anything. The difference in a movie like this – especially a Michael Bay movie – is that things change so quickly you can’t really be set. You can’t have a set way you want to play something because inevitably it’s going to change. The setting is going to be different than you ever expected; he’s going to throw different lines at you and you have to be able to roll with it. I would say 90 percent of the lines I say in these movies are just sort of thrown at me in the moment while shit’s blowing up. And you have to learn it quickly. A lot of the stuff I do in this isn’t really emotional. It’s highly energized in the midst of battles. So it’s mostly giving orders or “in the heat of battle” sort of dialogue, so it’s not as intimate. But at the same time, you still need to be truthful in whatever it is. 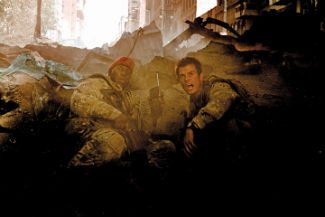 It takes every bit of focus just to try to be on point. Every second that passes is money, especially on these movies. You gotta be ready to go and ready to change at a moment’s notice.

I’ll never forget one of the first movies that we did. I think it was the very first one. There was this giant sequence where I was running across this desert, and there were bombs going off all over the place. There were jets flying overhead, and there was this giant explosion that was going to happen behind us, and that explosion was going to launch me right in front of the camera where I was going to deliver these three lines in the heat of battle. So, if you mess that up, you can imagine what the reset is. There was a giant cable cam that was following me, and so there was so much coordination in the shot – this had to go off here, this had to go off here, gunfire everywhere, and then you had to like deliver this line. And, if you mess up this line you’ve got to do it all over again. We’re talking, like, a $100,000 shot. So, you know, I try not to think of it like that. I try to think what’s happening right now, what are we trying to accomplish in this moment. It’s pretty simple when you break it down amidst all this craziness, just got to keep it simple and tell the truth.

I&T Today: We’ve seen a lot of major characters come and go throughout the series, but your character William Lennox has stuck around. Why do you think this character has had such staying power in the franchise?

I think that it has to do with the fact that there’s a military element throughout, and the one that I wasn’t in there wasn’t a military element, so there was no need for my character. So I’d say that’s the biggest reason. I work really well with Michael. I really like him; he likes me. I show up on time every single day ready to go, and he likes that. So, you know, it’s a lot of things. I think it speaks to the way I try to handle my business all around. Just show up every day, do exactly what I say I’m going to do, and under-promise and over-deliver.

I&T Today: When an actor maintains a role for this long, I would think that there’s a danger of being typecast. However, your filmography has a really nice range to it. What characters would you say you’re most attracted to doing apart from your work in Transformers?

Josh Duhamel: You know, I never know until I read it. If you ask anybody, the goal is not to get put into a box – “this is what he does,” or “he does that.” For the longest time for me it was romantic comedies. I hated it at the time, but I’ve learned over time to embrace it because it’s hard enough to get a job in this business, so once I was able to do that, and get a job, and get another job, and then start to make decisions about what I want to do – I feel grateful to have that. The ability to at least. I don’t have the choice that a lot of guys have, but I’m in a place where I can pick and choose kind of where I want to take my career. One of the things I’m doing next is a comedy. I think I’m going to be directing my first movie this summer. It’s all systems go, something that we wrote, a total dude comedy about this group of friends that gets together every year and they haven’t for the past three years because one of the guys got really injured, a prank that went bad….So it’s fun; it’s sort of in the vein of The Hangover, old school kind of movie.

I&T Today: You’ve often stressed the importance of your middle-class background in your career. What’s it like being in the position of a father and asking yourself things like, “When will I show my son my Transformers movies?”

Josh Duhamel: He’s three and a half and he’s all boy, so it’s hard for me not to keep it from him because he’s attracted to it anyway. A month ago I was in Atlanta working, and the first Transformers was on, and I was riding on a motorcycle shooting this Decepticon, and I was like, “You know what? I’m going to let him see it. Why not?” So, he came in, and that little dude was so entranced by it. He looked at me with a totally different lens. It was like “Daddy, you were fighting the robots?” It was kind of cool. I don’t know if it will affect him positively or negatively in the future. He’s going to see it, and it’s not like it’s anything gory. It’s just intense for a three-year-old to see. A lot of stuff going on, an assault to the senses…I’ll probably take him to the premiere this summer.

I&T Today: You were probably about 12 when the cartoon premiered back in 1984. Do you remember watching the series as a kid? Was it kind of weird being the star of this series as an adult?

Josh Duhamel: Twelve is a pretty (excuse the pun) transformational age. So I was kind of at that age where I was more into sports. I was starting to get into girls. Cartoons weren’t really what I was into, but I do remember them, and I thought it was cool.

But the better story is that all those years later, when I first went in to meet Michael Bay’s producing partners on a different movie, he was poking his head in, telling me he’s working on Transformers, and we should come over and check out what he’s doing. I’ll never forget thinking “Transformers? Oh my God. That sounds like the worst idea ever.” [laughs] But I went over anyway to see what he was doing. They had this whole room full of the artwork of these characters that I remembered as a kid, completely reinvented. It was like a whole new thing for me, and that’s what I love about this. If it’s done right, and if it’s done with a lot of care and creativity, you can totally reinvent something, as long as you keep the essence of what people loved about it and then just use that and make it better. The first thing I thought was “Oh my God, he really took this thing to the next level.” I never would have imagined it. I thought it was just going to be this little cartoon, and that was like 2006 or whatever it was. It was mind-blowing to me to see how different it was, and then a month later he had me in to read for it and here we are, 10 years later.