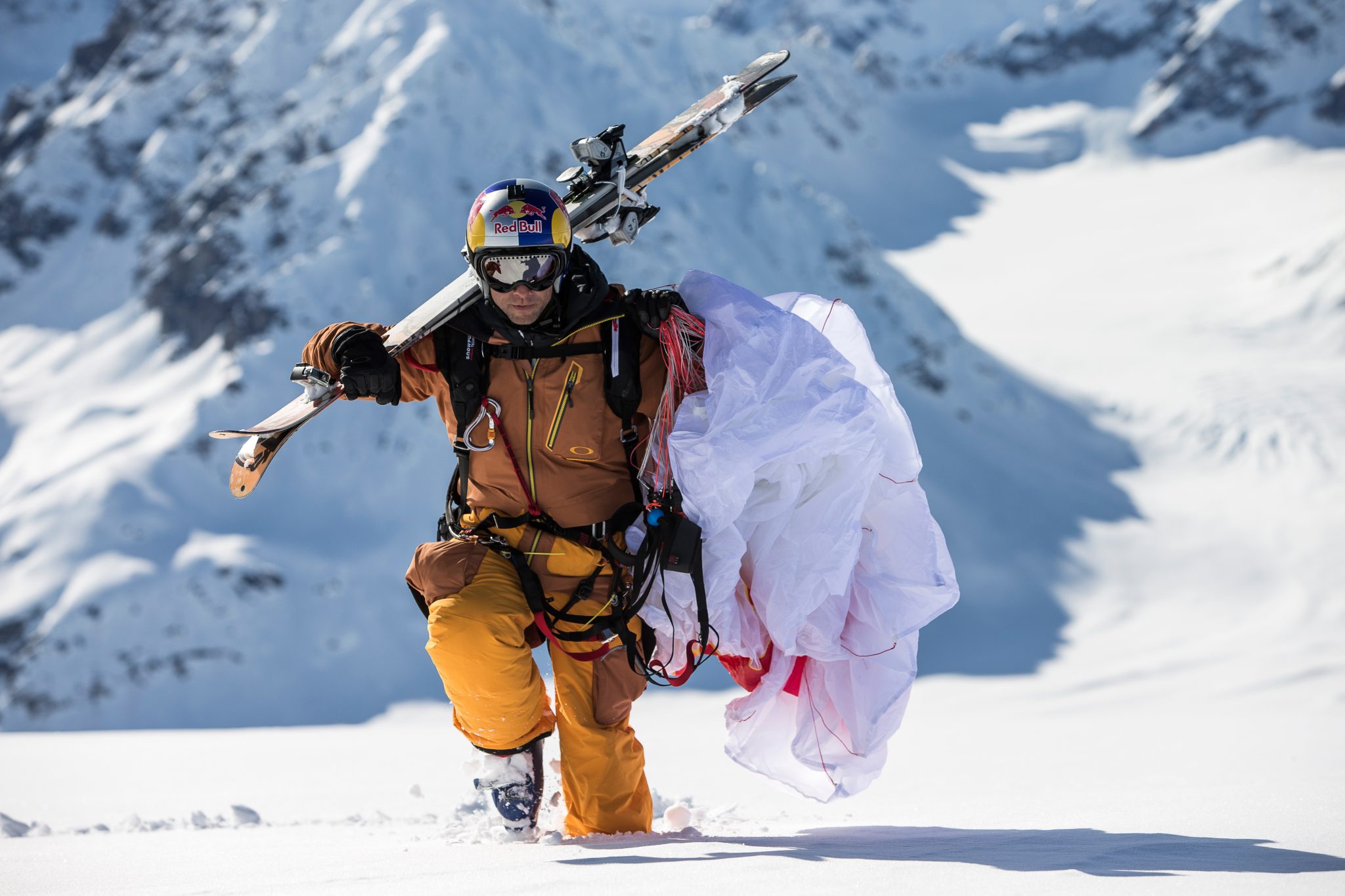 Jon DeVore was buzzing with energy in Chicago less than 24 hours before he set a free-flying, skydiving world record with 164 fellow skydivers. We caught up with the professional skydiver, BASE jumper, and blockbuster stuntman who manages the Red Bull Air Force. In this exclusive, DeVore talks about the role technology has played in advancing multiple facets of the sport, surviving a 90 MPH crash in New Zealand, and turning his passion into his profession.

Innovation &Tech Today: Tell us about your passion for human flight.

Jon DeVore: I grew up in a special place called Juneau, Alaska. Growing up in a small mountain town instilled the adventure spirit in me. When I found skydiving, I was only seventeen. After my first jump, I realized all of the other sports I was in love with – like skiing – didn’t quite give me the same feeling. I always tell people: you either check it off your bucket list, or you’re hooked. There is no middle ground.

I&T Today: What was it like seeing yourself in Ironman 3 and Transformers: Dark Side of the Moon?

JD: What’s crazy is I got into skydiving mentally before I even jumped in 1991. That was when most people first fell in love with skydiving, when the old-school Point Break movie came out. And after I got into the sport, I looked at people who were 45 and asked myself, What did they do to turn their passion into their profession? Few people today can say that all that they do is professional skydiving. The people that I saw doing the best at the time were the guys that found a way into the world of production. The first time I looked up and saw myself flying on screen I was just…speechless. It was almost like a dream, like you’re waiting to wake up because you realize you’ve accomplished your goal. Full circle, I got hired on as the aerial stunt coordinator and the top stunt double for the new Point Break movie. Which is surreal to me, because it’s what got me into the sport.

I&T Today: What goes through your mind before a big jump?

JD: The most intense thing we do in our career is the wing suit BASE jump proximity flight. It’s the most unforgiving, and most of our calculations and thoughts go into these kinds of jumps. It’s a major rush and a train wreck of emotions. You’re thinking about everything from calculation, the serving conditions, and making sure everything you mapped out is accurate since you are so low to the ground that you can’t crash. Crashing is fatal. That is heavy on your mind. Me personally, I have a beautiful wife and two little girls. I have to make it home alive and make the smart choices. My last mantra right before I exit is to tell myself to control my animal. One might call it ego, but I think of it as my inner animal. When you get into a really intense flight, a lot of times, that inner animal takes over. It can make you push it a little too far. You think you can clear this hump, make it through these trees, or whatever that little devil on your shoulder is telling you to do. It pushes you to seek that little adrenaline rush – it’s like a mini turbo booster. I’ve had some really close calls, so I try to keep that animal inside at bay as much as possible.

I&T Today: What was it like to walk away from that 90MPH crash in New Zealand?

JD: That was a long time ago. It’s funny you know about that!
It was intense. You know when it happened, I never lost my train of thought. But, when I hit the ground, I saw black for two minutes before I started seeing anything. In my mind I was sure I was dead. I thought I was going to another life because I still had that inner dialogue. It stayed for months after. I wondered if I was living in a parallel universe. I was weird mentally for a little while. The lightning strike of luck was that I didn’t get hurt at all from going in with barely any parachute at all.

I&T Today: How did it happen?

JD: So, the Cliff’s Notes version: We were jumping out of a helicopter at 12,000 feet with snow skis on. Eventually my stunt was to cut the parachute and ski away – not super difficult for those who’ve practiced it. When you pull off a little pilot chute, it eventually pulls your main chute out. Mine hung up, so it was just towing along and didn’t go through the deployment sequence. I was reaching for it, and the next thing you know I was flying like I was sitting on my ass, not standing up on my skis. So my feet were up in the air, and by the time I got my parachute pulled, the lines wrapped around my ski boots and bindings. It kind of hog-tied me, and I went into the ground.

JD: Luckily, that happened when I was super young! But you know, in the end I’m going to be jumping until I’m 100 years old.

I&T Today: Some people think you guys are batsh*t crazy, but there is an intense process behind each jump. What is that like?

JD: We push it as the Red Bull Air Force Team. We do 60+ shows per year. What’s really special and intense about it is that 9 out of 10 times they’re in a place that would otherwise be illegal to jump into. First, we collect all the basic details of the jump. Then there’s a lot of Google Earth research, site visits, and making sure the flight path for the jump is going to work. We have the ground safety guys talking to us up in the aircraft, down to the second we jump so we know what the live conditions are down there.

I&T Today: Tell us about some innovations in skydiving.

JD: What really got me, for lack of a better word, famous in the sport was when a small group of guys in Arizona (where I moved to start my skydiving career) and I developed vertical flight. And at that time, nobody really thought it was possible to get off the belly to earth position with much control. But a small group of us believed we could fly feet towards earth, head-first towards earth, and any three dimensional variations – even choreographed together. For many years I was one of 10 to 12 people in the world that kind of perfected this.

When the wing suits were perfected, we were able to start jumping off big cliffs. It was a rebirth of my love of human flight because, even though I’ve done over 19,000 jumps from the sky, it was a whole different animal to have terrain, trees, and features so close to you that you are really without a shadow of a doubt a flying machine. You see a tree or a knoll, and you can maneuver around things on a dime. It’s really addictive to have that power.

Then there is the world of speedriding. A handful of us have done it for quite some time, but it’s only recently getting attention. The reason for this fast growth is that it takes a combination of being a proficient big mountain skier and a proficient canopy pilot to be a speedrider. But really the sport is a perfect hybrid of big mountain skiing and high performance parachute flying. It’s really opening everyone’s eyes to what is possible on these mountains. We are able to go to this terrain and these features that no one would ever get to. There is no way in and no way out. It makes you feel like the mountains are yours to play with.

I&T Today: Tell us about the role tech has played in your career.

JD: The coolest thing for our sport has been a company called iFly. They build huge skydive wind tunnel machines that are popping up like wildfire. Those things are absolutely amazing. These wind tunnel machines are so engineered and fine-tuned that the air is 100 percent identical to skydiving. Somebody like myself can go in and train for a world meet and be able to do years worth of training in a couple weeks without jumping out of a plane everyday. There is no substitute for exiting the airplane, but it accelerates the learning curve beyond anyone’s wildest imagination.

Also these gadgets are really helping us improve the wing suits. When we race through gates for Red Bull, we have little computers onboard called Flysight. There are a few other heads-up display companies that are starting to perfect things like glide ratios, horizontal speeds, and vertical speeds. A couple years ago all we had was feeling. Technology and GPS stuff has started to catch up enough that we’re able to see real-life data.

I&T Today: You guys have the first female member on the Red Bull Air Force, Amy Chemelecki. What is your projection of the number of female action sport athletes?

JD: I think it’s going to be tremendous, to be honest! It has really picked up over the last decade, and everybody I’ve talked to is excited: sponsors, fans, you name it. Everyone is really getting behind supporting the female athletes. The world is their oyster at this point. That door is swinging wide open, and I’m seeing a lot of opportunities for the girls out there in the skydiving community. It’s really cool.

At-Home Fitness Apps to Keep You Healthy During Lockdown